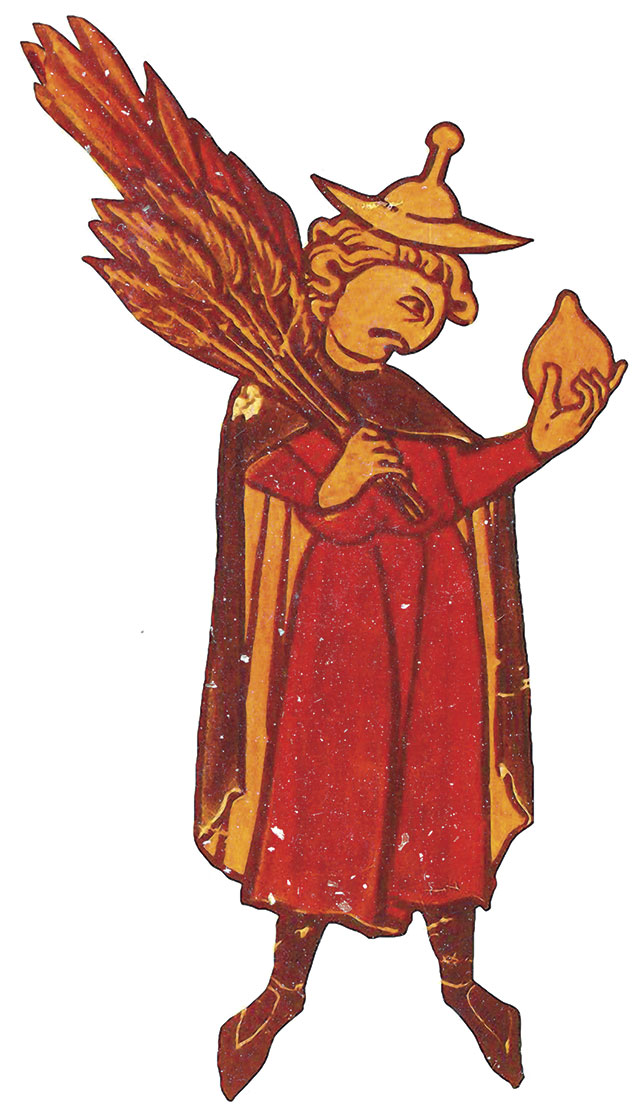 In the province of Judea in the eastern parts of the Roman Empire two millennia ago, the followers of Jesus sought to define themselves as against the Jewish world within which their movement had been born. Christians adopted the books and prophecies, rituals and traditions of Judaism and inverted them: the Passover meal became the first Eucharist and baptism was likened to a new, bloodless circumcision. They claimed to replace sacrifices at the temple with spiritual ones. Jewish patriarchs and matriarchs, prophets and kings were all interpreted anew to offer models for a Christian world.

To what Christians now called the Old Testament they added the Gospels that tell the life of Jesus, as well as works about exemplary Christians: saints and martyrs, and that Hebrew woman who responded to God’s call: Miriam, Mary, Mother of God. Here developed the idea of supersession—that the new covenant replaced the old, that Judaism had been right for its time, but that the coming of grace rendered it obsolete.

Polemical exchanges on all these subjects were conducted, first mostly in Greek in the eastern Mediterranean within a still-pagan empire (see pp. 6–10, "Faith divided"). Christians argued that Jews read the Bible according to the flesh, in a low manner that missed the core message; while Christians understood it according to the spirit, in a true and inspired manner. By the fifth century, Christianity had triumphed, becoming the official creed of the Roman Empire. In this position of power, law and theology now had to answer a pressing question: how should a Christian polity treat Jews?

Augustine (354–430), bishop of Hippo in North Africa, emerged as the leading intellectual answering this question. He approached it from a deeply historical perspective: looking back to the Jewish origins of Christianity and forward to an apocalyptic future when the Jews would convert at the end of time. Contemporary Jews were a necessary part of Christian heritage: essential to Christian life, though in error. Augustine considered them “book-carriers,” librarians of sorts, to Christians, because their books were essential to Christian flourishing. They also proved useful witnesses to the truth, he thought; their miserable state in the present offered a true sign of their failure to recognize Jesus and a punishment for a certain complicity—just short of guilt—in Jesus’s redeeming death.

The answer Augustine arrived at set the agenda for imperial legislation of the period and laid down principles for Jewish life in a Christian empire: Jews could not rule or exercise authority over Christians; but neither were they to be killed and abused. They were a vulnerable remnant, a teaching prop for the triumph of Christianity.

The centuries that followed saw the reach of Latin Christianity across Europe alongside Greek and Syriac Christianities in the eastern Mediterranean and Asia. Eventually dynastic kingdoms replaced the once powerful Roman Empire, and in them Roman law and Christian theology together defined the position of Jews. This varied vastly from region to region, with large Jewish populations in the Mediterranean—Spain, Italy, and southern France of today. By 1000 numerous communities existed in some northern European cities, where local rulers invited Jews to settle under their protection.

Why invite Jews to settle? How were Jews useful to Christian polities? In a society whose wealth depended on land and agricultural produce, rulers used bureaucracies for the collection of tolls and taxes, for minting distinctive coins, and for reliable diplomatic service. To aid this rulers and their Jewish constituents struck up a mutually beneficial arrangement—the members of this cohesive group provided links to other European communities through kinship and business, and in exchange Jewish communities placed their trust in the ruler who had offered protection.

The identification of Jews solely with financial services was yet to be born. When bishops in the Rhineland sought to develop wine-making around 1000, they invited Jews from Italy to do so; when William the Conqueror established rule in England, he too brought over Jews from Normandy to supervise coinage and later offer loans. Roman law’s maxim that the Jews belonged to the royal “purse”—or treasury—made Jews servants of power and desirable dependents.

This use of Jews as props for government became a widespread practice. But rulers could not always protect their Jews, and the rulers themselves proved intermittently voracious and capricious. In 1096, for example, troops of armed men marched to the Holy Land from France through the Holy Roman Empire on what was later called the First Crusade. They attacked and killed hundreds of Jews in the Rhineland cities, even though their lords, the local bishops, tried to protect them. In England in 1190, a notorious massacre of Jews at Clifford’s Tower in York occurred despite the protection that the local sheriff, the king’s representative, offered. And some kings combined protection and pressure: like Henry III of England (1207–1272), who encouraged conversion, or Louis IX of France (1214–1270), who staged a public disputation on the errors in the Talmud in 1240, at which the Jewish representative was bound to be the loser.

Various agents within Christendom also discussed Jews, imagining them anew as part of their drives to reform and purify Christian life. By 1200 a clear physical stereotype had emerged in representing male Jews: a pointed hat denoting eastern foreign-ness, a crooked nose, swarthiness to make them ugly, and a foolish or conniving expression to show they lacked true reason and spirit.

Alongside the established church, groups of enthusiasts also arose at this time, revival movements criticizing power and wealth (see pp. 17–20). These movements called urban Christians to value poverty and simplicity and to identify with Christ’s life, especially his suffering on the cross. Such friars also targeted the Jews. New art forms emerged, like that of the Tuscan painters Duccio and Giotto around 1300, whose Crucifixion scenes depict ugly and angry Jews.

Jews lived and even prospered in the cities where religious culture steeped with such imagery prevailed, but violence became occasional and endemic. When in 1347 the Black Death hit Europe and killed some 40 to 60 percent of its population—especially in urban areas—the citizens of hundreds of towns and cities fell upon their Jewish neighbors, blaming them for poisoning the wells and causing the worst epidemic Europe had ever known. Even Pope Clement VI could not turn the tide by pointing out that Jews were dying too and should not be blamed. Angry mobs destroyed hundreds of communities in Germany, Iberia, and France. Many Jews migrated eastward, where they hoped for greater safety.

Most Jews lived far less eventful lives than the plague generations. They flourished and achieved, studied and innovated in thought and practice. While maintaining their religious traditions, they spoke local dialects, adapted local food and drink to Jewish dietary law, dressed as others did, and built homes and communal buildings in the local style. But they were vulnerable.

Between 1400 and 1500, all the main cities of the Holy Roman Empire expelled them, forcing moves to small towns and villages where they made a living in livestock trade and peddling. These dramatic expulsions refigured Jewish life as the shtetl (Yiddish for small town) experience, as Jews adjusted to communities outside the metropolitan centers.

In Iberia, where revivalist preaching fanned the demands of urban competitors, a violent wave of massacres took place in 1391. Some 100,000 Jews converted to Christianity, but a new form of Jew-hate now developed: a hatred of these “New Christians,” the Jews who had converted, but who could not be trusted. They were suspected of being false Christians, insidiously inhabiting Christian spaces, and mingling with Christian bodies. Iberian rulers introduced the Inquisition to pry into converts' lives and expelled the remaining Jews from the kingdom of Spain in 1492.

Spanish monarchs also legislated to protect “purity of blood” and so barred New Christians and their descendants—called conversos—from leadership in state, church, and religious orders. Even in their absence, Jews remained alive in the Christian imagination of those advising kings and preaching in town squares. So conversos often left for more tolerant regions: the Low Countries, the Ottoman Empire, and the reaches of the growing Spanish and Portuguese Empires.

Why were Jews suspect even after they had converted to Christianity? Negative associations from the dawn of Christianity—of Jews with matter rather than spirit, with flesh rather than soul, with the lowly rather than the sublime, with the denial of Christianity’s core truths—all persisted deep within European intellectual and ethical traditions. Defining Christian faith in relationship to Jews became ingrained in traditions of debate and moral distinction of European intellectuals—but also part of the devotional routine of parishioners, those most likely to be the Jews’ neighbors.

And so in the sixteenth century, when Europe’s division over religion shattered the ambition of a universal Christian church, Catholics hurled the accusation of “Judaizing” at Protestants for their emphasis on a more literal reading of Scripture. Martin Luther moved from seeing Jews as victims of a corrupt Catholic establishment to imagining them as vicious demonic servants of the anti-Christ (see p. 28, “Jews, lies, and Nazis”). The Merchant of Venice by William Shakespeare (written between 1596 and 1599) used powerful and by now widely accepted tropes of Jewish greed and literalism to explore the Christian bonds of charity, even at a time when no actual Jewish communities existed in England.

Over the centuries, in the imagination of Christians, Jews became the doubting questioners from within; intimate others against whom morals, ethics, and aesthetics were judged. Meanwhile in Europe, and soon in its lands of conquest on other continents, Jews everywhere lived, got on, survived, even flourished—just ordinary Jews. Yet on occasion they could be morphed into that other Jew: cast in narratives of blood libel, the accusation that they used the blood of Christians (especially Christian children) in their rituals; accused of desecrating consecrated Eucharistic bread; or made the center of conspiracies of deceit.

And when Jews were thought of as Jews above all, they ceased to be everything else they were. The cultural resources for considering Jews to be “other” were abundant. Not all Christians believed these narratives and claims, but preachers and other shapers of opinion used them. Within society’s webs of interest and competition, this could make Jews seem unworthy of the human care that all others deserved. C H

Miri Rubin is professor of medieval and early modern history at Queen Mary University in London and the author of numerous books on the late medieval period, including Gentile Tales: The Narrative Assault on Late Medieval Jews; Charity and Community in Medieval Cambridge; and Corpus Christi.