It Happened on APRIL 21

FROM CHILDHOOD TO FINAL STROKE CATHERINE SHONE WITH AMAZING LOVE 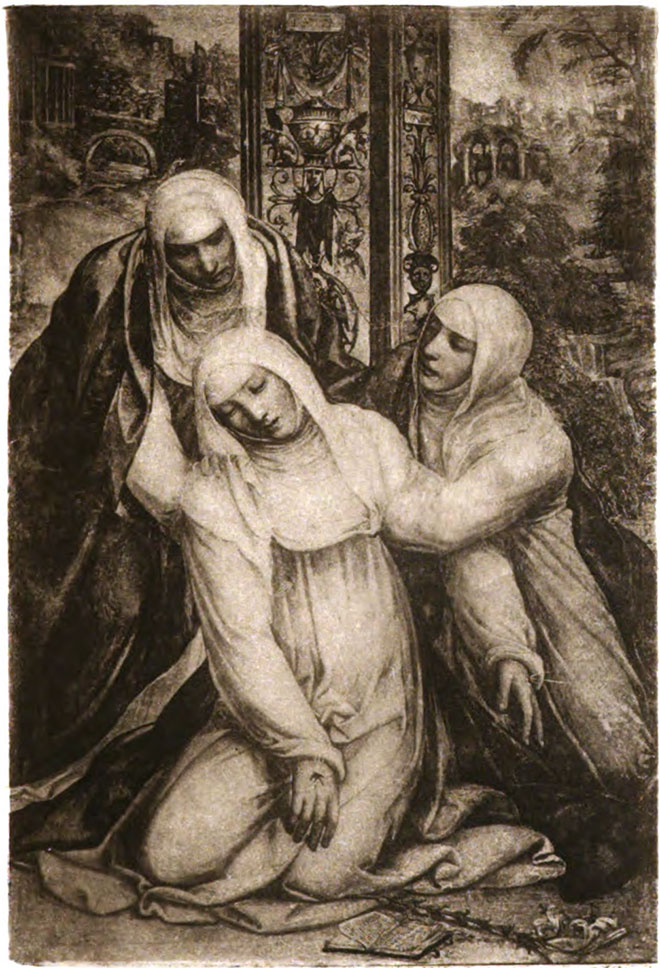 [Above: The Ecstasy of St. Catherine from Edmund G. Gardner’s Saint Catherine of Siena: A Study in the Religion, Literature, and History of the Fourteenth Century in Italy, at p. 198. [public domain] United Kingdom: J. M. Dent & Company, 1907.]

“Even children show what they are by what they do; you can tell if they are honest and good” (Proverbs 20:11, Good News Translation). This proverb was borne out in the life of Catherine of Siena. Born in 1347, from age five she showed devotion to Mary. Because of her cheerful talk, friends and neighbors nicknamed her Eufrosina, “Joyful Thought.” At six she had a vision of Christ blessing her, and lost all sense of her surroundings until a brother yanked her arm. This was the first of many ecstatic trances.

She began to fast, to afflict her body, and to visit caves and woods, envisioning herself as a hermit. (After she matured spiritually, she realized that such practices do not make one holy, and recommended them only as aids to true penance or for seasons of intense prayer.) At seven she made a vow of virginity. But after she turned twelve, marriageable by the standards of the time, her favorite sister, Buonaventura, coaxed her into dressing more fashionably. Buonaventura died three years later. Catherine immediately reverted to her earlier intent. She always lamented her lapse as a deep sin—of having preferred her sister over God, and she punished herself severely for it.

Catherine’s parents wished her to marry Buonaventura’s widower, a man of some consequence in Siena. She balked at this. A friar appointed as her confessor quickly recognized the depth of her conviction and counseled her to cut off her hair as a sign of her commitment to virginity. In rebuke, her family treated her harshly and made her a maid-of-all-work. She responded by retreating into what she called “the cell of self-knowledge.” She pretended that each of her persecutors was a holy figure from the Bible sent to chastise her for her sins, and served them willingly. Her father relented and allowed her to join the third order of St. Dominic, the “Brothers and Sisters of Penance Living at Home.” He set apart a room for her.

At twenty-years-old, Catherine left her self-imposed isolation. Thereafter she attracted disciples by her evident purity, mysticism, and prophetic utterances. Many wicked people repented after brief encounters with her. During plague she nursed the sick.

Increasingly her life intersected with the complex political and religious affairs of the time. Italian cities were at war with each other and many were in rebellion against the pope who was trying to strip them of traditional liberties. The pope lived not in Rome but in luxurious Avignon. Corruption and cruelty infused the church hierarchy. Catherine attempted to interpose between the warring cities. She urged Pope Gregory XI to move to Rome and she wrote to religious and secular authorities, urging them to repent of wicked behavior.

She was thrilled when Gregory XI returned the papacy to Rome, strengthened by her words. Eventually Florence reconciled to the papacy, another outcome she had devoutly sought. (Rioters in Florence killed some of her allies but left her alive when she faced them down in the name of Christ.) But she was bitterly disappointed when the church split following the election of tactless Pope Urban VI. Most of Europe’s Catholic nations accepted antipope Clement VII in Avignon as true pope. Catherine returned to Siena from Florence and dictated The Dialogue of Divine Providence while experiencing ecstatic trances.

She described it as a dialogue between a soul and God. The voice within her told her

My vision begins with terror, but always, as it grows, gives greater confidence; it begins with some bitterness, but always grows more sweet. In the vision of the enemy the contrary happens, for in the beginning it seems to bring some gladness, confidence, or sweetness, but, as it proceeds, fear and bitterness grow continuously in the soul who beholds it.

Pope Urban ordered her to Rome. She took his side wholeheartedly, rejoiced in a series of military victories that strengthened his position, and seemed blind to his underhand dealings.

On this day, 21 April 1380, while still in Rome, Catherine—who already walked with difficulty—suffered a massive stroke that paralyzed her from the waist down. Eight days later, she died at the age of thirty-three.

What should we make of Catherine? She probably was anorexic—her confessors had to compel her to eat. Her trances may have been a form of catalepsy: more than one doubter drove pins into her (once completely through her foot) and elicited no reaction until she came to. Was she delusional? She claimed a mystic ring on her finger and stigmata which no one else could see. Most troubling is that, while she clearly saw the wrongs in church and society, whenever she became involved in the politics of the day, she loaned her name to her allies’ dishonorable actions. When all is said, however, no one can doubt her desire for the glory of God. Her mystic writings focus on Jesus and the Father and are infused with deep and passionate love.

The Catholic church named Catherine a saint in the fifteenth century and eventually made her copatron of Rome and of Italy. In naming her a doctor of the church in 1970 (one of the first women so honored), Pope Paul VI pointed out that her writings are not systematic theology, but rather a “lucid, profound and inebriating assimilation of the divine truths and mysteries of faith . . . due to a charism of wisdom of the Holy Spirit, a mystical charism.”