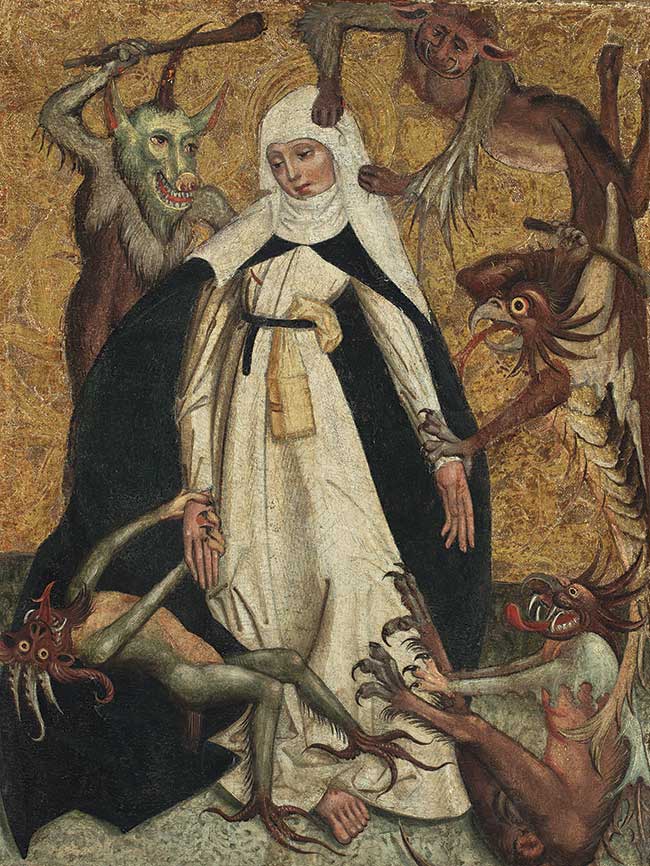 Catherine of Siena (1347–1380) was born at a momentous time. In 1347, according to writer Charles L. Mee Jr., “in all likelihood, a flea riding on the hide of a black rat entered the Italian port of Messina. . . . The flea had a gut full of the bacillus Yersinia pestis.” With that rat, flea, and bacillus came the most feared plague on record. In just three years, 1348–1350, the Black Death killed more than one-third of the entire population between Iceland and India. Remarkably the young Catherine survived the onslaught.

“It is hard to grasp the strain that the plague put on the physical and spiritual fabric of society,” Mee concluded. “People went to bed perfectly healthy and were found dead in the morning. Priests and doctors who came to minister to the sick, so the wild stories ran, would contract the plague with a single touch and die sooner than the person they had come to help.”

People barred themselves in their houses or fled to the country. A fourteenth-century writer, Jean le Bel, wrote that “one caught it from another, which is why few people dared to help or visit the sick.”

Yet when another wave of the plague struck Catherine’s hometown of Siena in 1374, the 27-year-old determined to stay. Following the example of the early Franciscans and Dominicans, she and her followers stayed to nurse the ill and bury the dead. Respected nineteenth-century historian Philip Schaff wrote that during the plague Catherine “was indefatigable by day and night, healed those of whom the physicians despaired, and she even raised the dead. The lepers outside the city walls she did not neglect.”

We have no way of knowing the accuracy of this story by her biographer, Raymond of Capua, but it certainly seems to capture the spirit of her letters:

In the meantime the holy virgin had heard that Matteo [a patient at the Misericordia, or hospital] had been struck down by the plague. As she was very fond of him because of his virtues, she hastened to see him, fired by charity and as though angry with the plague itself, and even before she reached him she started shouting from a distance, “Get up, Messer Matteo, get up, this is no time for lying in a soft bed!”

At the words of this command the fever and the swelling in the groin and all the pain immediately disappeared, and Matteo felt as well as if he had never been ill at all. . . . [He] got up as cheerful as a cricket, convinced that the power of God dwelt in the virgin, and went away rejoicing.

After the miracle, the virgin, to avoid being praised, hurried away; but as she was coming out of the house I came in, still very upset, and, not knowing what had happened, and imagining that Matteo was still in the throes of the plague fever, I was so aggrieved when I saw her that I said, rather heatedly, “Mother, are you going to allow this man who is so dear and useful to us to die?”

Whereupon, although she knew quite well what had happened, she answered most humbly, almost as though she was offended by what I had said, “What is this you are saying? Do you think I am God, to be able to deliver mortal human beings from death?” At this, being so unhappy, I said shortly, “You can say that to anyone else, but not to me, for I know your secrets, and I know that anything you ask the Lord for is always granted.” Lowering her head, she gave a little smile, then, looking up at me with happiness written all over her face, she said, “Cheer up, he won’t die this time.”

By Editors of Christian History