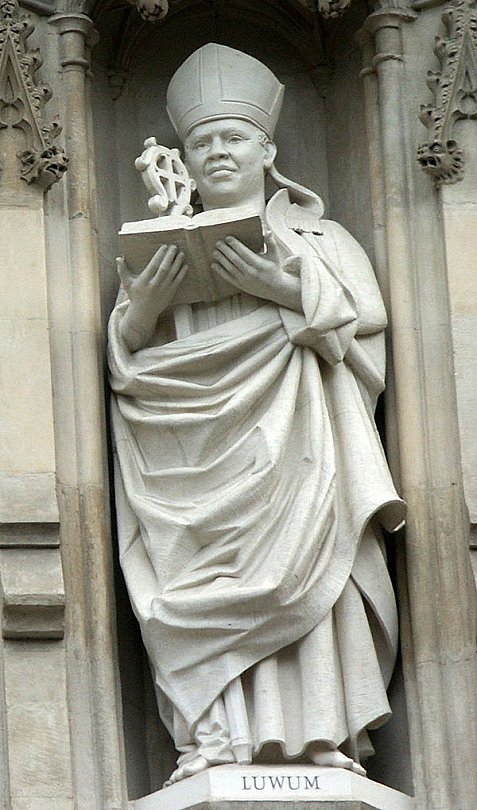 Statue of Luwum in Westminster Abbey; photo by Jean-Christophe BENOIST

THE CHURCH IN UGANDA was born in blood when King Mwanga martyred Bishop James Hannington and forty high-placed Catholic Ugandans in the 19th century. Perhaps it was the memory of those brave martyrs that made twentieth century Christians bold when they faced an even worse blood-bath.

Idi Amin seized power as Uganda’s president in 1971 and butchered 300,000 Ugandan Christians. In January, 1977, Anglican Bishop Festo Kivengere challenged the killing in a sermon on “The Preciousness of Life.”

A month later, Idi Amin shot Archbishop Janani Luwum who had uttered similar warnings to the dictator. The government claimed Luwum died in a car wreck. But government officials did not always get away with murder. About the time of Luwum’s murder, a Ugandan chief raised his spear to kill pastor Ponsiano Lwakatale. Christians prayed. Despite several tries, the chief could not drive the spear into his intended victim.

Meanwhile, threatened with death, Bishop Kivengere fled with his family to neighboring Kenya. In this way he survived Amin’s eight years in power.

On this day, 27 January 1978, twenty-nine ordinary Christian men and women faced an ordeal of a different sort. Chiefs of Uganda’s Masaka district seized them. They forced the Christians to crawl on their hands and knees while they were beaten and they exposed the women to humiliate them. Afterward, the chiefs held the group in prison for six days. Far from complaining, the faithful believers seized the opportunity to witness about Christ to their fellow prisoners.

Samuel Morris, African Missionary to America, tells the amazing story a suffering African lad who was led into truth by the Holy Spirit and sent to America as a witness to the power of God

In Kenya, Bishop Kivengere continued his Christian witness, too, writing a book entitled I Love Idi Amin. “The Holy Spirit showed me,” he wrote, “that I was getting hard in my spirit, and that my hardness and bitterness toward those who were persecuting us could only bring spiritual loss ... So I had to ask for forgiveness from the Lord, and for grace to love President Amin more.” When he could safely return to Uganda, he preached love, forgiveness, and reconciliation to the bruised nation.