It Happened on APRIL 20

When Kaiserwerth Went Broke, Fleidner Stuck By its People 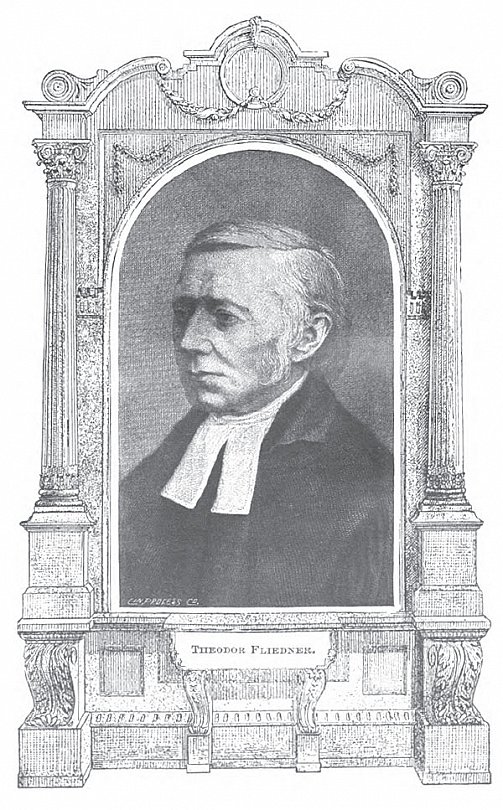 AS A BOY, Theodor Fliedner exhibited a combination of characteristics not often seen together. Though he had a deep love of books and would spend long hours studying and learning Latin while other children played, when he did play he played hard and could outrun and outfight boys two and three years older than himself. He was also rather courageous. When a Cossack soldier stole some smoked hams from his parents’ farm, he hurled a block of wood at the man, who dared not retaliate because his army had ridden away. Fliedner was also handy with a knife and could carve wooden spoons and mugs.

Fliedner’s father, a charitable pastor, died of a fever while his oldest sons were still at the gymnasium (high school). A manufacturer paid for the boys’ education, and friends raised money to support Fliedner’s mother and his many siblings. Fliedner, however, had to darn his own socks, mend his own clothes, and chop firewood for pocket money. He recalled later that when he knelt at his confirmation, his main concern was not to scuff the knees of his new pants. When he left the gymnasium (high school), he entered college to study for the pastorate and sat in lectures by professors who did not believe the Bible. He obtained his license to preach without heart knowledge of God. However, the holy life and conversation of a minister he met named Krafft caused Fliedner to reexamine his relationship with Christ. Soon, he began to grow in faith.

A little church at Kaiserwerth invited him to become their pastor, and Fliedner accepted. Soon after he reached town, a factory that was the region’s main source of income went broke, throwing everyone out of work. Superiors offered Fliedner a better position, but he declined. He felt it was duty to stick by his people, and visited churches in Germany and Holland to raise support.

Back in Kaiserwerth, he actively pursued prison reforms. Every second Sunday, he walked to a prison in Dusseldorf and served as a chaplain to its prisoners. When a woman newly released from prison came to him asking for help, he opened a cottage in Kaiserworth for her and other newly released women prisoners. He also opened a nursery for children, freeing their mothers for work.

Fliedner is most famous, however, for his deaconess work. He had observed the role that deaconesses played in the Moravian community tending the sick, and he felt this was a work the German church needed to also take up. He appealed to larger, wealthier churches all across Germany to undertake the project, but none of them shared the vision. Finally Fliedner realized it would be up to him and his impoverished people to lead the way. At his wife’s insistence, on this day 20 April 1836, with virtually no down payment but with unbounded faith that God would provide the balance, he purchased the largest and finest house in Kaiserwerth and began converting it into a hospital for the needy. The owners gave him until Martinmas (November 11) to pay the remainder. Somehow, the money appeared, and by October the place was open.

Gertrude Reichardt, the forty-eight-year old daughter of a physician, took charge of the work. She proved to be an ideal leader, teaching practical nursing skills and increasing the spiritual devotion of the workers who joined her. Florence Nightingale was one of the women who received training at Kaiserswerth.

Detractors predicted that Fliedner’s work would fail. However, it not only succeeded, but also spread across Europe and the United States. By his death in 1864, there were dozens of deaconess homes and training centers. Many hospitals in the United States grew from this deaconess movement. Some still have the word “deaconess” in their names. Fliedner also founded a rest home for retired deaconesses, an asylum for the mentally ill, a boys’ school, and training colleges for schoolmasters and schoolmistresses. As if that were not work enough, he published a monthly magazine and wrote a four-volume history of martyrs and other witnesses from the time of the apostles to the nineteenth century.