Faith Gets the Credit 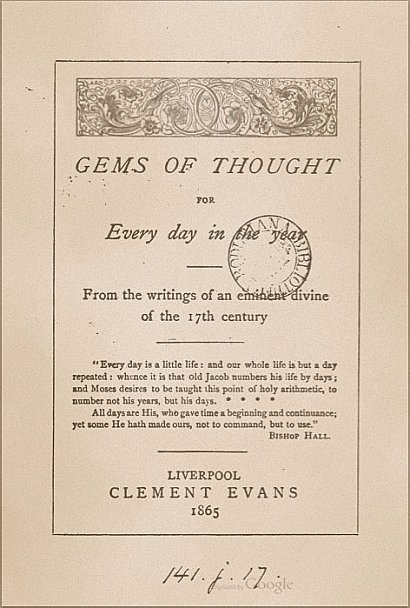 Title page of Gems of Thought

You shall observe, that in the same action, wherein other graces are eminently exercised as well as faith, even then faith is taken notice of, and the crown set upon faith’s head, rather than any of the other. We hear nothing almost of any other grace throughout the whole eleventh of the Hebrews, but faith; “By faith Abraham,” “by faith Jacob,” and the rest of those worthies, did all those famous exploits. There was a concurrence of the other graces, with faith in them all, but all goes under the name of faith: the whole army fight, yet the general or captain has the honor of the victory ascribed to him. Alexander’s and Caesar’s names are transmitted to posterity as the great conquerors that overcome so many battles, not the private soldiers that fought under them. Faith is the captain-grace: all those famous acts of those saints are recorded as the achievements of faith.

An anonymous compiler prepared Gems of Thought from the writings of “an eminent divine of the 17th century.” The “eminent divine” is identifiable as William Gurnall (1616–1679), author of The Christian in Complete Armour (1655).

[William Gurnall.] Gems of Thought for Every Day in the Year. Liverpool: Clement Evans, 1865.