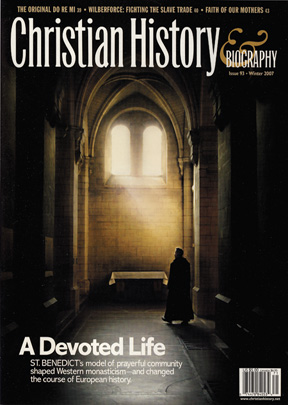 Benedict, Did You Know

A Life of Listening

For centuries, monks were at the center of the Western missionary enterprise.

A Monk Who Made History

Bede gave us the single greatest source of information we have about Anglo-Saxon England.

The Tale of Peter Abbot

One of Cluny's most “venerable” leaders believed firmly that the church is always in need of reform.

Under Charlemagne's influence, the monasteries shaped the future of Western education, trade, and even handwriting.

Not everyone who influenced the development of monasticism was actually a monk. Case in point: Alcuin.

Unceasing Prayer in an Uncertain World

As the peace and unity of Europe collapsed, the monastery of Cluny pointed a new way forward.

Count Gerald of Aurillac took the values of the monastery into the realm of everyday life—and the battlefield.

Many Catholics and Protestants are looking back to Benedict for the community and spiritual intensity they can't find in modern culture.

Christian History Timeline: Benedict and the Rise of Western Monasticism

From its roots in the early Eastern church, through the Benedictine centuries, to the birth of new kinds of religious orders in the Middle Ages

compiled by Antonia Ryan with contributions from Carmen Acevedo Butcher

The Original Do, Re, Mi

Julie Andrews made it popular, but the real musical genius behind this singing aid was a medieval monk.

"You have not labored in vain"

After a crushing political defeat, William Wilberforce nearly gave up his fight to abolish the slave trade. But a life-changing letter from John Newton sent this Daniel back into the lion's den.

Faith of Our Mothers

The history of the church would have looked very different without these famous moms.

The settling of Jamestown; the preservation of a monastery; and recycling medieval manuscripts.

Grace is in the Details

An 18th-century book gave Richard Foster new eyes for the present moment. The ordinary had never looked so extraordinary.

Dig deeper into this issue's theme

The authors and editors
Issue 93