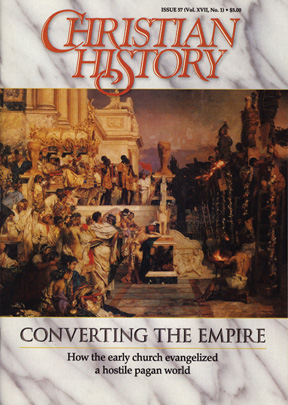 Evangelism in the Early Church: Did You Know?

Little known or remarkable facts about church growth in the ancient pagan world.

From the Editor — Hodgepodge Evangelism

Early Christians used a hodge-podge of methods to draw their neighbors’attention to Christ.

The Empire Within the Empire

How Christians responded to the sometimes strange accusations of their critics.

The Exile and the Slave Girl

Two of the least known but most effective early evangelists.

Evangelism in the Early Church: A Gallery of Key Converts

Evangelism in the Early Church: Christian History Timeline — The Growth of Early Christianity

Chronology of the growth of the early church.

The untold benefits of becoming a Christian in the ancient world.

Evangelists to the Death

It took centuries for Christian martyrs to impact pagan society.

When Christianity came to town, the religious marketplace was already crowded.

From Black Magic to Mystical Awe

Glimpses of many-sided Roman paganism—from engravings, parchments, and tablets of the ancient world.

The story of early Christianity’s most famous—and most controversial—convert.

The Emperor Strikes Back

How the once illegal religion became the law of the empire.

Today’s evangelistic challenge is not all that different than it was for the early church.

Resources for further study of evangelism in the early church.