Issue 87 India: A Faith of Many Colors 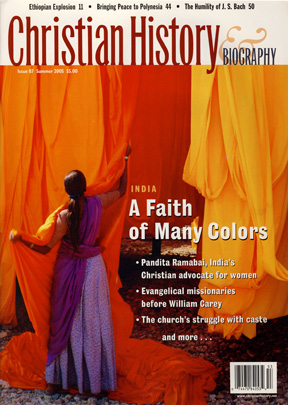 Resources for further study on Christianity in India.

Edinburgh 1910: A Faith for All the World

India: Did You Know?

Interesting facts about Christianity in India

Of Saris and Such

Case studies from an Indian Christianity that defies our limited palette.

Jesus Was Her Guru

If you don’t know the inner strength of an Indian woman with a divine call, you haven’t met Pandita Ramabai.

How do Christian beliefs relate to Indian philosophy and culture? These Indian thinkers came up with different answers.

Combining the lifestyle of an ascetic “holy man” with the devotion of a Christian visionary, Sadhu Sundar Singh became for many a symbol of authentically Indian Christianity.

For India’s “untouchable” Christians, relating their faith to the surrounding culture was no simple matter.

British missionary John Williams pioneered the spread of Christianity in the South Pacific by employing the zeal of Polynesian converts.

For the Glory of God