IT WAS JULY 1706. The people of Tranquebar, a small Danish trading station on the Coromandel Coast in southeastern India (modern-day Tamil Nadu), rejoiced to see the Danish ship Sophia anchoring in the deep waters. Tamil boatmen rushed to offload the cargo. The captain who oversaw the transfer of goods became impatient and mercilessly whipped the boatmen. But one of the passengers on the ship, a 23-year-old German missionary, objected, “Do not whip! They are people.” To this the captain replied, “No, they are Malabarians [i.e., ‘beasts'].”

In contrast to the callous attitudes of merchants who exploited lowly workers without concern for their well being, the missionary, Bartholomaeus Ziegenbalg (1683–1719), had come to India for the express purpose of letting all people, high or low, know their privileges, rights, and responsibilities before God. Ziegenbalg’s deep respect for the Tamil people, their culture, and their traditions left an enduring impact upon south India and had far—reaching influence. By the time William Carey, the celebrated English Baptist missionary often called the “father of the modern missionary movement,” arrived in Calcutta in 1793, evangelical Christianity in India was nearly a century old. Almost every missionary method that he later developed had already been tried—by a Pietist Lutheran in Tranquebar.

Early Lutheran Reformers had associated “mission” with preaching the Word of God and administering the sacrament, leaving little place for cross—cultural missionary work. But German Pietism (sometime called “The Second Reformation") opened the door to a more holistic understanding of Christian outreach. Halle Pietist leader August Hermann Francke believed that evangelism and education went hand in hand and that every person on earth should be able to read the Bible in his or her own language and to learn some useful skill—a revolutionary vision for world mission.

A Pietist court preacher in Copenhagen persuaded King Friedrich IV to start an overseas mission in 1705. He also managed to bring two young German Pietists, Bartholomaeus Ziegenbalg and Heinrich Plütschau, to Copenhagen and strove to have them ordained as missionaries. The king took it for granted that the Danish Lutheran Church and the Danish East India Company (DEIC) would support his decision. This did not happen. In fact, the directors of the DEIC dispatched a secret order to the governor of Tranquebar directing him to hinder the missionaries—an order that unfortunately reached the governor before the missionaries arrived. He left them stranded on the shore.

By 1706, Tranquebar (Tamil: Tarangambadi, literally “village of dancing waves") was already a flourishing trading settlement of about 30,000 people, including 20 Danes, 500 Roman Catholics (mostly of Indo-Portuguese descent) and 2,000 Muslims. About 90 caste groups worshipped in 51 major temples and spoke 18 different languages (predominantly Portuguese and Tamil).

Soon after his arrival, Ziegenbalg ventured to bridge the gap between the Europeans and the Indians, who looked on Christianity as something foreign. He learned to speak Tamil, read Tamil literature, and carefully studied the ideas and practices of the people. In 1708 he confessed that his knowledge of the local culture had “converted” him, and he no longer viewed the Tamil people as “the uncivilized heathens,” like other Europeans did. His experience enabled him to treat the Tamils as equal partners and friends and to earn their trust in return. In fact, his commitment to justice and the welfare of the common people collided with the interests of the DEIC, which did not hesitate to imprison him for four months.

Ziegenbalg was committed to helping the Tamil Christian converts practice their faith within their own cultural setting. Once a Tamil medical doctor asked him, “Should converted Christians give up their culture and social status?” Ziegenbalg replied, “No, converted Tamils should not become Europeans! Conversion does not mean a change of outward appearance; rather it requires a change of mind and results in a transformed life.” He believed that conversion to Christian faith should re-orient the entire life of the converts, including their cultural and religious heritage, towards Jesus Christ.

Ziegenbalg’s Tamil sermons, hymns, ethical writings, and German translations of Tamil literature demonstrate his deep cultural and religious sensitivity. Moreover, his work in Tranquebar epitomized Francke’s vision of Bible translation and universal literacy. He was the first to translate the New Testament into Tamil (printed in 1715) and began translating the Old Testament as well—a project completed by his successors B. Schultze and J. P. Fabricius. Aided by Tamil partners, he built a church and founded schools where children studied the Bible along with Tamil ethics, mathematics, astronomy, medicine, and world geography. In the course of time, these children became the bearers of Tamil Christianity.

Ziegenbalg’s colleagues tried to follow his example by continuing his translation and literary endeavors. Their many accomplishments include a treatise on Tamil medicine (1713) and the first English-Tamil Dictionary (1779). C. T. Walther, one of Ziegenbalg’s most gifted successors, observed that Tamil culture was in many ways similar to ancient Hebrew culture and sent his observations back to Germany, hoping that his insights would clarify the meaning of certain biblical customs and idioms that Europeans could not easily understand.

Walther, who believed that European missionaries were merely temporary guests and catalysts among the Tamil people, was also a strong advocate for indigenous leadership. In 1727 he encouraged Rajanayakkan, a convert from Roman Catholicism, to establish a congregation in Thanjavur—a task no European would dare to attempt since Thanjavur was an ancient citadel of Tamil power and pride. Rajanayakkan, a soldier in the army of the King of Thanjavur, also acquired a grant from the Maharajah for a model modern school. In 1733, Walther persuaded the mission authorities in Europe and the Christians in Tranquebar to ordain Aaron as the first Tamil Lutheran pastor in Thanjavur.

The Tranquebar Mission bore fruits beyond its own small region. Ziegenbalg’s colleague B. Schultze established a Lutheran mission in Madras (then the major center of the English East India Company) and became the first missionary supported by the London Society for Promoting Christian Knowledge—a remarkable example of early ecumenical cooperation linking India, Germany, Denmark, and Britain. Moreover, the Halle Reports, the first mission periodical newsletter or magazine (published since 1708), popularized the Tranquebar Mission not only in Western Europe but also in Russia and North America and led to the emergence of voluntary missionary societies. Ziegenbalg’s pioneering endeavors thus not only laid the foundation for tremendous growth of the church in South India in the coming century, but it also set the pattern for future missionary work all over the world.

British missionary John Williams pioneered the spread of Christianity in the South Pacific by employing the zeal of Polynesian converts. 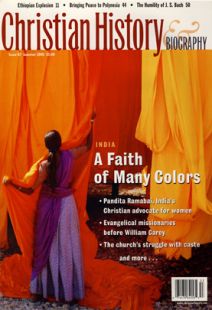