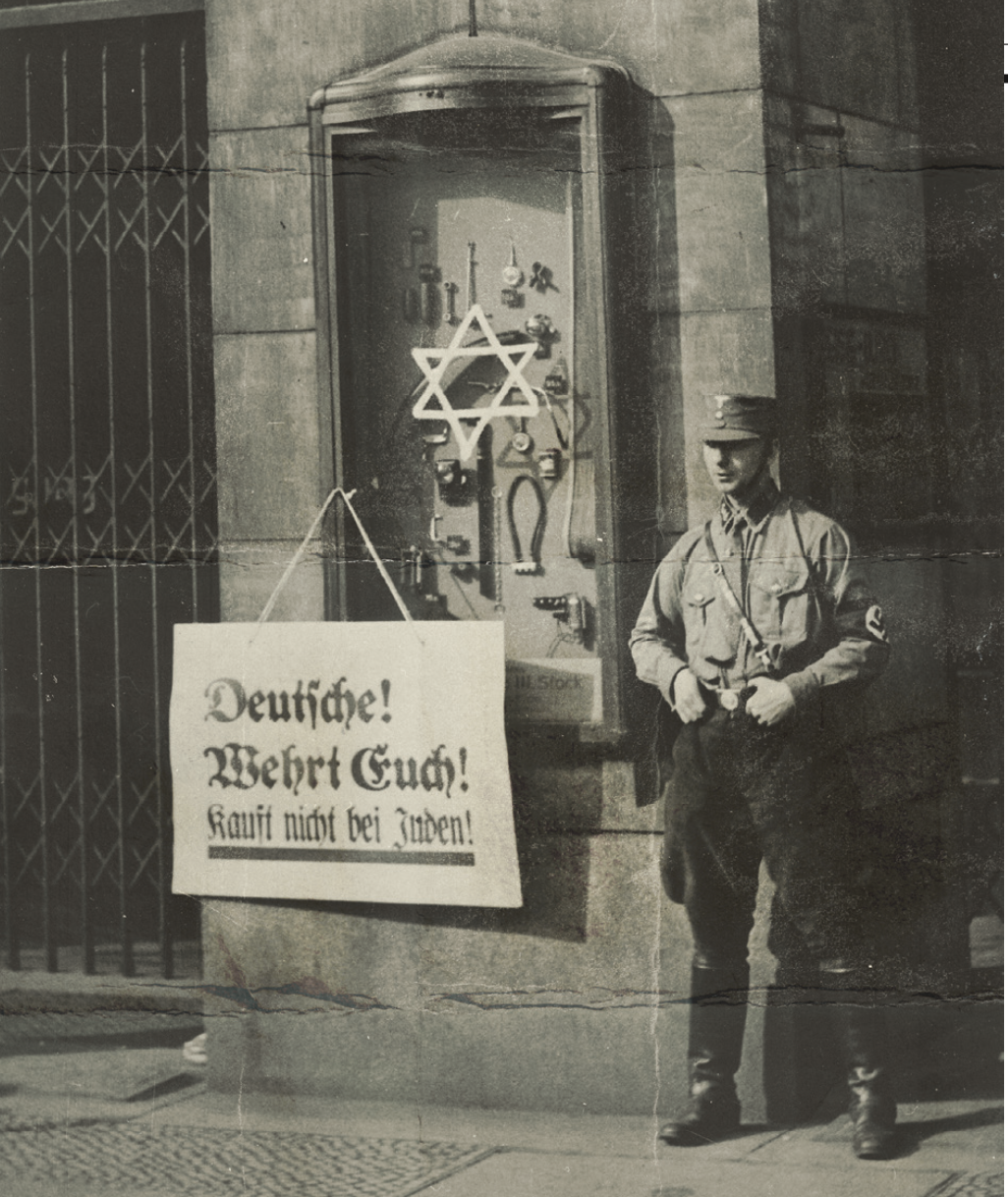 [ON APRIL 1, 1933, THE BOYCOTT WHICH WAS ANNOUNCED BY THE NATIONAL SOCIALISTIC PARTY BEGAN. PLACARD READS, “GERMANS, DEFEND YOURSELVES, DO NOT BUY FROM JEWS”, AT THE JEWISH TIETZ STORE—WIKIMEDIA]

In 1998 Israeli scholar Yehuda Bauer was invited to speak before Germany’s parliament, the Bundestag. “I come from a people who gave the Ten Commandments to the world,” he told the legislators. “Time has come to strengthen them by three additional ones, which we ought to adopt and commit ourselves to: thou shall not be a perpetrator; thou shall not be a victim; and thou shall never, but never, be a bystander.”

During the 12 years of the Third Reich, Christians broke each of Bauer’s commandments. A few had resisted Nazi iniquity. But the majority fell along the complicated spectrum between perpetrator and bystander.

The lesser of two evils?

In World War I, most German Protestants, two-thirds of Germany’s population, had participated gladly in what they saw as a crusade against Catholic (French and Belgian) and Orthodox (Russian) national neighbors. But instead the costly war toppled the conservative German monarchy. In its place came the Weimar Republic, taking its nickname from the city where its constitution was signed. Its socialist and liberal founders were forced to sign a harsh peace treaty that later served as political fodder for right-wing groups like the Nazis. Even if the violence of the Nazi “Brownshirts” put them off, patriotic Christians living in Stalin’s shadow told themselves that the stridently anticommunist Nazis were at least the lesser of two evils.

On January 30, 1933, Protestant president Paul von Hindenburg, appointed a new chancellor: Adolf Hitler. Many clergy greeted this appointment gladly. The dean of Magdeburg Cathedral, Ernst Martin, said about the cathedral’s Nazi flags, “Whoever reviles this symbol of ours is reviling our Germany. The swastika flags around the altar radiate hope—hope that the day is at last about to dawn.” Another pastor, Julius Leffler, announced,

In the pitch-black night of church history, Hitler became . . . the wonderful transparency for our time, the window of our age, through which light fell on the history of Christianity. Through him we were able to see the Savior in the history of the Germans.

Just two days later, young pastor Dietrich Bonhoeffer questioned Hitler’s leadership on national radio—prompting the radio station to switch off his microphone mysteriously before he could broadcast his closing statement, which included the line “Leaders [Führers] or offices which set themselves up as gods mock God.” But such protests were unusual. Protestant clergy instead celebrated by holding mass baptisms for children left unchristened during the Weimar Republic’s more secular years.

The genocide of the European Jews . . . was preceded by years of intensifying anti-Jewish persecution, which much of Europe’s non-Jewish population either witnessed or participated in.

Roots of this persecution went back centuries (see pp. 16 and 28), but in the twentieth century, the Protocols of the Elders of Zion—a Russian forgery pretending to detail Jewish plans for world domination, published in German in 1920—added fuel to the fire.

As the Nazis came to power in 1933, Jews were first forbidden from holding government positions. Two years later the Nuremberg Laws stripped them of their citizenship and forbade them from joining the military and from marrying non-Jews. Soon those prohibitions expanded to holding professional jobs, receiving government contracts, attending non-Jewish schools, and being treated by non-Jewish doctors. Special stamps on their passports and clothing forcibly marked them Jude.

In 1938, after a Polish Jew shot two German officials, the Nazis organized retaliation—Kristallnacht, the Night of Broken Glass, so called because the Nazis broke the windows of many Jewish businesses, as well as setting fire to synagogues. As some Jews fled to other countries and others were killed, Nazis declared regions to be Judenfrei or Judenrein—free or clean of Jews. But the worst was yet to come.

“The purity of the blood”

One who welcomed the Nazi revolution at first was pastor Martin Niemöller. A former U-boat captain, Niemöller became a Nazi voter, hoping that Hitler would restore Germany to greatness. But he soon grew troubled. Not only did the new regime attempt to place Protestant churches under state control, it encouraged the “German Christian” movement, which viewed Hitler as a messianic figure and sought to strip Jewish influences from Christianity.

In May 1934 Niemöller and other leaders of an opposition group (which would become the Confessing Church) issued the Barmen Declaration, a statement against “German Christians” largely written by Swiss pastor Karl Barth. But state church bishops rejected the Confessing Church, not wanting to lose their privileges. Wearied by political debates, many laypeople retreated from church involvement altogether. And even though German Christians derided Confessing Church leaders as “Jew-pastors,” those leaders actually said little on behalf of Jews who had not converted to Christianity. In 1935, the year the Nuremberg Laws stripped Jews of citizenship, Niemöller preached that God had cursed his chosen people as a penalty for the Crucifixion.

On January 30, 1937, Adolf Hitler celebrated his fourth anniversary as chancellor. Speaking before the Reichstag, he professed “thankfulness to our Almighty God” but promised more struggles lay ahead: “Of all the tasks which we have to face, the noblest and most sacred for mankind is that each racial species must preserve the purity of the blood which God has given it.”

That same day Niemöller spoke in another part of Berlin. Now his message was different; he prayed for all non-Aryans removed from their jobs during the Nazi revolution. By year’s end he had been arrested for statements against Nazism. He served his time awaiting trial, but the state detained him anyway: eventually he was transferred to the Dachau concentration camp.

Higher than the Fatherland

On the day he gave his fourth anniversary speech, Hitler pinned gold Nazi membership badges on cabinet members who had not yet joined the party. But when he reached his devoutly Catholic postal and transport minister, Paul von Eltz-Rübenach, the minister refused Hitler’s honor and loudly told the führer to stop “oppressing the Church.” The infuriated Hitler stormed away, and Eltz-Rübenach resigned. Hitler’s propaganda minister Joseph Goebbels responded, “That’s the Catholics for you. They take orders from somewhere higher than the fatherland—the only truly saving church.”

The Nazis had promised Pope Pius XI in the Reichskonkordat (1933) and earlier treaties that they would leave Catholic institutions alone in return for their church staying out of political affairs; some later argued that Pius could have done more to stop the Nazi menace. In that same year, Jewish convert to Catholicism Edith Stein had written him urging:

For weeks not only Jews but also thousands of faithful Catholics in Germany, and, I believe, all over the world, have been waiting and hoping for the Church of Christ to raise its voice to put a stop to this abuse of Christ’s name.

In January 1937 anti-Nazi Catholic bishops traveled to Rome, and, with the Vatican’s chief diplomat, Eugenio Pacelli (later Pope Pius XII), they convinced Pius XI to issue a German encyclical—in a departure from the usual Latin—condemning Nazi abuses. Mit brennender Sorge (With Burning Concern) was smuggled into the Third Reich and read aloud from Catholic pulpits across Germany on Palm Sunday:

He who sings hymns of loyalty to this terrestrial country should not . . . become unfaithful to God and His Church, or a deserter and traitor to His heavenly country.

Hitler ordered all copies seized and restrictions placed on Catholic churches. As many as one in three priests faced state discipline or imprisonment. But—even so—the “Red Threat,” as communism was called, loomed larger for Catholics: five days after issuing his German encyclical, Pius XI addressed an even more strongly worded one against communism.

Moreover, Mit brennender Sorge criticized Nazi racism without explicitly defending the Jewish people. Neither Catholic nor Protestant leaders spoke out effectively in the wake of Kristallnacht; Bishop Martin Sasse of the state church in fact exulted that “on Luther’s birthday, the synagogues are burning in Germany.” When Germany finally went to war in September 1939, Protestants and Catholics alike filled the ranks of the German military, wearing belt buckles that paired the broken cross of the swastika with the traditional German military claim, “God with us.”

As the Holocaust began under the cover of war, some did resist. Thanks to Lutherans in German-occupied Denmark and Orthodox in German-allied Bulgaria, the vast majority of Jews in those countries survived. Reformed Protestants like French pastor André Trocmé and Dutch watchmaker Corrie ten Boom risked their lives to hide Jewish refugees. Anne Frank, whose diary would shock the world after her death from typhus in Bergen-Belsen concentration camp, was hidden in a “secret annex” in Amsterdam by Dutch Catholics Miep and Jan Gies.

In Germany Clemens von Galen preached against the T4 euthanasia program, which ultimately killed 200,000 mentally and physically disabled people. Sophie and Hans Scholl and others of the “White Rose” were students whose nonviolent resistance through pamphlets and graffiti led to arrest and execution in February 1943. A third of Germany’s 30,000 Jehovah’s Witnesses were imprisoned for refusing to serve in the military or give the Nazi salute; a thousand died in the camps.

But even when those as courageous as von Galen protested mistreatment of Jews from their pulpits, they saved their sharpest critiques for state sanctions limiting Christian practice. As details of the Final Solution became known, church leaders largely retreated in fear, complaining only in private. In the end most clergy and lay Christians would be bystanders, if not willing perpetrators, as six million Jews went to their deaths between 1933—when Dachau was first established for political prisoners—and May 1945 when the war in Europe ended. Elie Wiesel, a Romanian Jewish teenager living in Hungary when he was sent to Auschwitz, wrote in his influential memoir, Night,

On April 9, 1945, to the sounds of nearing Allied artillery, seven anti-Nazi resisters were hanged at the Flössenburg concentration camp. One was Dietrich Bonhoeffer. Unlike hundreds of other priests and pastors held at Dachau, Martin Niemöller survived imprisonment. While he exerted significant moral authority in post-Nazi Germany, Niemöller knew that he and other Christians had largely failed the test of the Third Reich. In his 1946 memoir, he confessed that he felt compelled to tell any Jew he met,

Dear Friend, I stand in front of you, but we can not get together, for there is guilt between us. I have sinned and my people [have] sinned against thy people and against thyself. C H

Chris Gehrz is professor of history at Bethel University and coauthor of The Pietist Option. He blogs at PietistSchoolman.com. A different version of this article appeared in issue #121 under the title, “The church of the bystanders.”