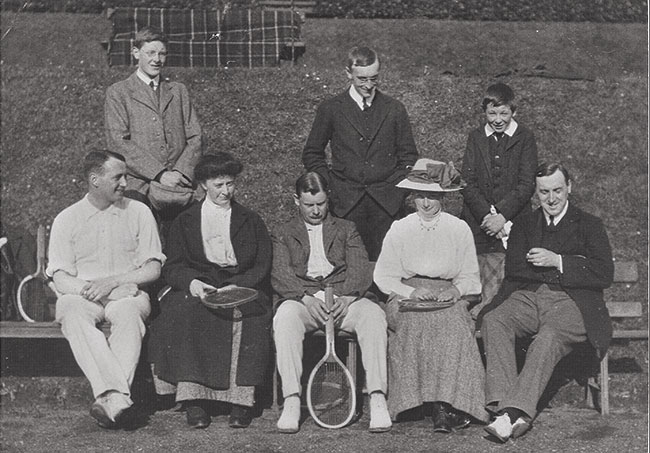 [Above: A SPOT OF TENNIS? Greeves (back row, far left) and Lewis (back row, far right) participate in a tennis party at the Greeves family home in 1910. Tennis Party at the Glenmachan, Northern Ireland. CSL/P7. Used by permission of the Marion E. Wade Center, Wheaton College, Wheaton, IL]

C. S. Lewis had a gift of friendship. Over and over in his fiction and nonfiction and in his daily habits—the frequent letter writing, the gathering with colleagues in community—Lewis communicated that we are diminished when we are alone; we are somehow greater when we gather together. That is because friends call forth different aspects of ourselves.

Community enriches our lives, and it also shapes our personalities. When we make time to gather together, to connect with different people from various places, to share those things we love, admire, and appreciate, our friendships do more than enrich our experiences; they change who we are.

Lewis’s own friendships illustrate this transformation—and none more than his lifelong friendship with artist and fellow Northern Irishman Arthur Greeves (1895–1966). In The Four Loves, a famous passage on the distinction between First and Second Friends turns on Lewis’s very different experiences of friendship with Greeves and with another of Lewis’s lifelong friends, solicitor Owen Barfield (see pp. 45–48). Lewis describes Greeves under the name of the “First Friend,” which he defines as

an alter ego, the man who first reveals to you that you are not alone in the world by turning out . . . to share all your most secret delights. There is nothing to be overcome in making him your friend; he and you join like raindrops on a window.

Barfield, the “Second Friend,” was to Lewis the kind of person

who disagrees with you about everything. He is not so much the alter ego as the antiself. Of course he shares your interests; otherwise he would not become your friend at all. But he has approached them all at a different angle. He has read all the right books but has got the wrong thing out of every one.

Both friendships would remain important to Lewis throughout his life. Describing his meeting with Greeves in Surprised by Joy, Lewis called him “after my brother, my oldest and most intimate friend”; in their meeting, Lewis was surprised by friendship. Joseph Arthur Greeves lived directly across the street from the Lewises in Belfast. His family owned a flax spinning company, J. & T. M. Greeves & Co., and belonged to the Plymouth Brethren (see CH 128 for more on the Brethren).

Arthur was the youngest of Joseph Malcomson Greeves and Mary Gribbon Greeves’s five children. He spent much of his time convalescing with a congenital heart ailment and had long hoped to make friends with the Lewis brothers across the street. His hopes finally came to fruition one day in 1914, when Lewis heard that Greeves was ill and would welcome a visit. Lewis decided to stop by. As Lewis told it, when he arrived at the house, he found Arthur sitting up in bed, and on the table beside him was a book of Norse mythology. Lewis noticed the book immediately:

“Do you like that?” said he. Next moment the book was in our hands, our heads were very close together, we were pointing, quoting, talking—soon almost shouting—discovering in a torrent of questions that we liked not only the same thing, but the same parts of it and in the same way.

Although Jack Lewis was very close to his brother, Warren (see pp. 30–34), the two had different temperaments and interests. While they attended many of the same boarding schools, Warren generally liked them while Jack compared them to concentration camps. In Greeves Lewis found someone much like himself: “I had been so far from thinking [that] such a friend was possible that I had never even longed for one; no more than I longed to be King of England.” Lewis had at last found someone who liked the same books, shared the same views, and in many ways spoke the same language.

Greeves’s heart ailment prevented him from holding steady employment. Independently wealthy from his family inheritance, he never needed it. He studied at Campbell College in Belfast from 1906 to 1912 and earned a certificate from the Slade School of Art in London, which he attended from 1921 to 1923. Many critics considered him a good painter, and his landscape paintings were exhibited in 1936. Although he also wrote, Greeves never published. Lewis sent Greeves some of his manuscripts for critique.

Greeves could not travel much, aside from his studies, because of his bad heart. He stayed close to home in Northern Ireland, painting the countryside, and he kept up a sizable correspondence with Lewis. They remained good friends and wrote to each other regularly for 50 years, from Lewis’s first trip away to boarding school in 1914 until Lewis’s death in 1963. Over 300 letters from Lewis to Greeves have survived, as well as a few of Greeves’s letters to Lewis. Lewis articulated clearly what he learned from Greeves:

He was not a clever boy, he was even a dull boy; I was a scholar. He had no “ideas.” I bubbled over with them. It might seem that I had much to give him, and that he had nothing to give me. But this is not the truth. I could give concepts, logic, facts, arguments, but he had feelings to offer, feelings which most mysteriously—for he was always very inarticulate—he taught me to share. Hence, in our commerce, I dealt in superficies, but he in solids. I learned charity from him and failed, for all my efforts, to teach him arrogance in return.

Beauty in the ordinary

In his letters to Greeves, Lewis wrote candidly, opening up and sharing all his thoughts and dreams. These letters ran the gamut of human experience: anger, pity, glory, rage, spite, sin, guilt, repentance, forgiveness, joy, exaltation, worry, and fear. It seemed there was nothing these two didn’t discuss, companioning one another through adolescence, their first jobs, their relationships, the death of their parents, and the losses of old age.

Greeves’s belief in God exerted a strong influence on Lewis, who described him as “(always) a Christian” during the first days of their relationship and resistant to any of Lewis’s attempts to win him over to atheism; it was to Greeves that Lewis first wrote of his conversion to theism (see pp. 10–14).

Greeves’s own religious journey was more complicated, though. As an adult he rejected the Plymouth Brethren and attended worship at the Church of Ireland as well as Bahá’í services, finally ending up in Quaker gatherings (his ancestors had originally been Quakers before they converted to the Brethren).

After Greeves’s mother, Mary, died in 1959, Greeves bought a cottage in Crawfordsburn. He hosted Lewis there on several trips—and eventually hosted Joy Davidman Lewis as well when Jack and Joy journeyed to Ireland after their marriage. Lewis later said that the most important thing that he learned from Greeves was to appreciate the everyday beauty of ordinary things:

a gray cat squeezing its way under the barn door . . . a bent old woman with a wrinkled, motherly face . . . a pool of water in the moonrise.

Greeves did occasionally travel to visit Lewis, and their last in-person meeting was at The Kilns in 1961. Right up until the heart attack in late 1963 that turned out to presage Lewis’s final decline, he was planning to visit Greeves one final time in Ireland. He wrote in September 1963 to cancel the trip, and his concluding line of longing rings down through the decades: “Oh, Arthur, never to see you again!”

We are diminished when we are alone; we are somehow greater when we gather together. CH

Diana Pavlac Glyer is a professor of English in the Honors College of Azusa Pacific University and the author of numerous books on the Inklings including The Company They Keep and Bandersnatch. Portions of this article were adapted from CH issue #7 and from “C. S. Lewis and the Algebra of Friendship” in The Undiscovered C. S. Lewis (edited by Bruce R. Johnson, Winged Lion Press, 2021), reproduced by permission.