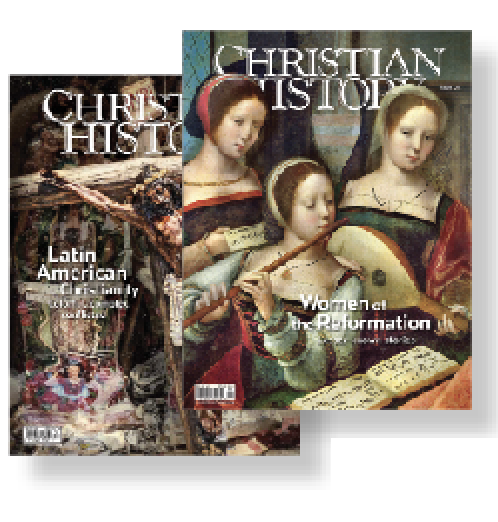 Thank you very much for the copy of CH 131! It is really attractive, with so many neat illustrations and such a nice collection of different figures. Thank you and blessings on your work.—Elsie McKee, Princeton, NJ (contributor to CH #131)

Another wonderful issue. It nicely supplements the Reformation series. Thank you for highlighting the work and passion of women in the Reformation period. Their contributions, sadly, are grossly overlooked. It is good to see (from your resources page) that much scholarship is being done to remedy this omission. May God bless you as you prepare for your next issue.—Tom Edmunds, Washington, NJ

Your magazine is interesting. I use some articles for lessons presented at a United Methodist Women’s meeting. Sometimes it inspires them to study further on these subjects. I especially enjoyed your issue about Women in Church History.—Anne Lippstreu, Alma, NE

We love to hear about our materials being used in churches! Issues like Women of the Reformation open our eyes to many things we didn’t know beforehand either.

Grateful for The Grand Miracle

What a wonderful gift! Each year I try to find a meaningful Advent devotional, and this year one found me. It could not be more perfect because the devotionals are based on the writings of some of my favorite authors—especially C. S. Lewis and G. K. Chesterton. . . . I so appreciate the work of Christian History Institute. Thank you so much.—Debra Ensor, Simpsonville, KY

Thank you for your encouragement! And it’s not too late to order copies of our new Advent devotional, The Grand Miracle—visit us online to learn more!

Ever since the issue on Baptists in America came out, I have wanted to contact you to indicate that there is a huge gap in what was portrayed. You entirely fail to describe the Baptist groups or denominations that separated themselves from the mainline Northern (a.k.a. American) Baptist Convention. First, during the 1920s, the GARB or General Association of Regular Baptists broke away in protest against the “modernist” theology and tendencies of the NBC, forming their own missionary society. Second, in 1942 or 1943, the CBFMS (Conservative Baptist Foreign Mission Society) was formed, soon followed by the formation of the CBA (Conservative Baptist Association).

I know this well since my father, an ABFMS missionary in India since 1929, was asked to become the very first CBFMS missionary in the newly formed society. There were soon over five hundred CB missionaries around the world, while numbers of AB missionaries dwindled. Third, just about this time, many if not all of the ethnic conferences within the Northern Baptist Convention also broke away to form their own missionary societies and denominations, including the Swedish, German, Finnish, and others. I know this because my father was also asked to join the newly formed Swedish Baptist Mission (long known as the Baptist General Conference). He was present at the formation of this new society, and asked to become one of its missionaries, even though he was already committed to the CBFMS. —Robert Eric Frykenberg, Madison, WI (contributor to issues #87 and #94 of CH)

Any time we do a broad survey issue such as the Baptist one, we have to make choices on what to include. In this case, in consultation with our scholar-advisor, we focused most especially on themes of religious liberty and racial conflict. Nevertheless, you are right that—as we discussed the splitting of Baptists in the twentieth century—we should have at least made mention of other ethnic tensions and of all the ways responses to “modernism” were played out within the broad Baptist tradition.

When we do survey issues, we also view them as openings to focus more closely in later issues on aspects of the tradition. We can easily see a fruitful future issue of Christian History being developed on Northern Baptists. C H