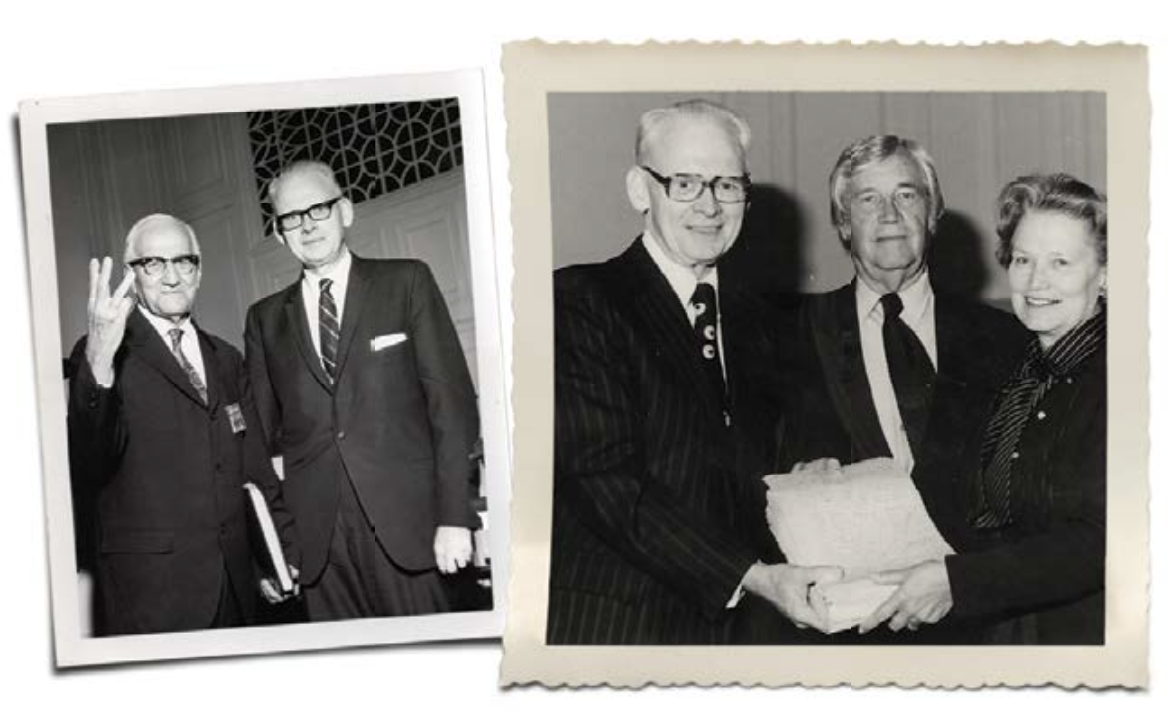 When I was about 13 years old and looking for a daily devotional, one of my family members handed me a small book. We didn’t have smartphones then, but it was about the size of two hefty smartphones put together: you could have put it in the pocket of a man’s blazer. The cover was orange. My grandfather had used it before me, and his underlinings and scrawled marginal notes appeared frequently. It was called The Way, and it was by Methodist missionary and evangelist E. Stanley Jones (see p. 40 for a picture of the book). Thus I first met, in a literary fashion, a man whose witness had profoundly shaped my family’s own.

I’ve commented before that my grandfather was a Methodist seminary president. Generally it’s not been relevant for me to be more specific than that, but in this case it is. The seminary was called Asbury Theological Seminary; my grandfather’s name was Frank Bateman Stanger. He is pictured above with Jones (left) and with Jones’s daughter and son-in-law, Eunice and James Mathews (right). Stanley (as he was called) is holding up the three-finger salute he used to represent the message “Jesus is Lord!” Eunice and James are presenting my grandpa the original manuscript of a little orange book called The Way.

Asbury Seminary is in Wilmore, Kentucky, and is a sister institution to Asbury College (now University), the institution that originally formed Jones and sent him out on mission. Jones spoke at both on his frequent evangelistic trips back to the United States. Today Asbury Seminary has a school of missions and evangelism named for Jones, the beginnings of which were established by my grandfather. The words, the mission, the ministry, the books, and the overall influence of Jones suffused the very air my family breathed, the way we experienced Methodism, the way we came to seek and know and love Jesus, and the way we sought deeper holiness.

From that insight grew all the organizations and movements Stanley Jones founded and the friendships he maintained—organizations, movements, and friendships that for many years made him, quite simply, the most famous missionary in the world. From that insight as well grew Mabel’s quieter but no less revolutionary activities as an educator—activities now finally getting the attention they deserve.

Through multiple moves over the past 35 years, I have lost my copy of The Way. (I looked in vain for it before I wrote this letter.) But in that book, I was introduced by Jones to the Way, the Truth, and the Life. And I have not lost that, from that day to this. CH

Jones’s breakdown and the recovery he found in Christ

Jones used ashrams to bring Christ to the Indian context