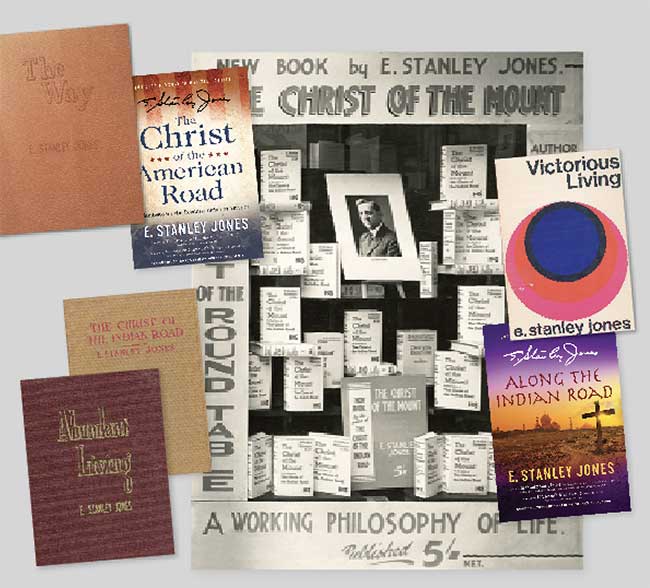 [Covers of some of the many books Stanley Jones wrote]

Reinhold Niebuhr, one of the mid-twentieth century’s foremost theologians, called Jones “one of the great Christian saints of our time.” This high praise speaks to the long shadow cast by “Brother Stanley’s” legacy.

Ahead of his time, Jones recognized the need for Christian missionaries to have a teachable sensitivity toward a host country’s spirit and cultural identity. While he concentrated on India, a land he loved deeply, he also preached extensively in virtually every country, which gave him a firsthand view of the world that few people on the planet had. At his Round Table Conferences, Jones realized one need not criticize another’s faith in speaking on behalf of one’s own. Even without relying on slick evangelistic techniques, he brought about significant numbers of conversions to the Christian faith.

Next came the Christian ashram movement, a communal learning experience Jones borrowed from his Indian hosts. At its apex 100 ashrams in over 30 countries existed. Though the movement waned for a time, its current iteration is growing, with renewed ties to the Sat Tal Ashram in India and new efforts in countries like Argentina and elsewhere. These are places of transformative, intergenerational evangelism and discipleship.

The new growth has happened through fresh, energetic leadership and the reintroduction of Jones’s books to a new generation. Through the E. Stanley Jones Foundation, Jones’s out-of-print books are edifying new audiences. Book sales alone do not measure impact, but the fact that his books keep selling indicates the very hunger Jones sought to satisfy. He had an aphoristic gift, putting insight into condensed statements that endure.

Blessings of the gospel

The Foundation for Evangelism started in 1949 under the leadership of people with whom Jones had strong influence. It desired to “diffuse the blessing of the gospel of the Lord Jesus Christ throughout the Methodist Church, the nations, and the world” and has funded E. Stanley Jones professorial chairs in evangelism at 13 different seminaries, three outside the United States. This effort has been going since the 1980s, with two full generations of students now included in Jones’s long shadow.

But the reach of Brother Stanley’s impact requires going beyond these tangible artifacts. Stephen Graham, one of Jones’s biographers, noted that in addition to Jones being ahead of his time in missionary methodology, he also saw the urgent need for racial justice and long advocated for it. A Christian pacifist, in the tense time before the United States entered World War II, he engaged in diplomacy between Japanese and American leaders to try to prevent war. All the while he maintained a preternaturally heavy preaching schedule.

Finally it would be impossible to grasp Brother Stanley’s lasting impact without referencing the multiplied thousands of pastoral interactions he had with people across the decades. He engaged constantly in conversation and was known to be a good listener, maintaining a steady flow of correspondence through letters when he could not be present.

No quantitative instrument can measure the impact of these touches, but many know how transformational it is to observe the long life of a faithful, fruitful Christian witness. While we admire Jones’s fame, his prodigious publishing record, and the ongoing ministry institutions that carry his fingerprints, we dare not forget his personal, lived-out, close-to-the-ground investment of time, heart, and love—where perhaps his true legacy lies.

Salt and a narrow escape

When the church goes to market, Did you know?