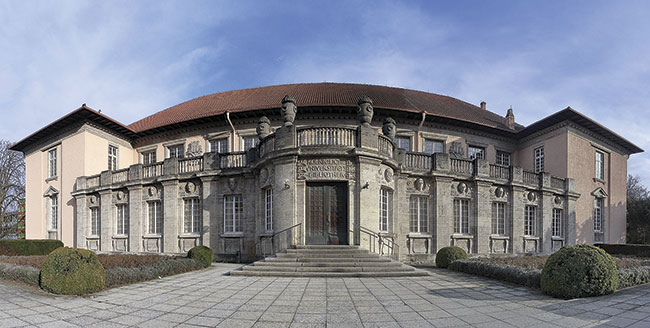 It was a moment when everything seemed to be changing. The Revolution that took aim at France’s aristocracy wound up unseating another monarch of sorts: theology, the traditional “queen of sciences” (see CH 134). Long enthroned by Europe’s intellectual giants and celebrated in the university, she now faced challengers to her reign as the Enlightenment challenged tradition, and the French Revolution and Napoleonic era (1789–1815) ushered in momentous changes.

“We see the old forms collapsing everywhere,” church historian Ferdinand Christian Baur wrote in the later nineteenth century, thinking of the French Revolution’s end in 1799. “It is as though a mighty storm blew across the whole of Europe, bringing down everything lacking the power to withstand it.” The Swiss historian Jacob Burckhardt quipped that the nineteenth century began with a “tabula rasa in relation to everything.”

Theology increasingly was cut loose from medieval churchly moorings and reshaped to academic research agendas—even as the institution of the university itself became more secularized. By the end of the nineteenth century, the study of theology would no longer be called on to support understandings of human flourishing mediated by the church, but now rather to operate as “one science among many,” whose answers to human questions must compete in a larger marketplace of ideas.

The most holy faculty

During the Revolution, France’s medieval universities came under fire. Government decree suppressed them; the Revolutionary government nationalized their endowments. The radicalization of the Revolution after 1792 brought about waves of dechristianization, the erasure of the Christian calendar, iconoclasm, episodic violence against clergy, and the short-lived turning of the Cathedral of Notre Dame into the Temple to the Goddess Reason. And this is to say nothing of the guillotining of King Louis XVI, the regal protector of Catholic France, a country traditionally seen as “the first daughter of the Church.”

The Sorbonne—a key college of the University of Paris since 1253—was unceremoniously shuttered on September 17, 1791. This seat of “the most holy theological faculty” had been a symbol of theological learning of the highest order in the medieval scheme of things (see pp. 12–15), but now, quite suddenly, it was no more. The building once housing theology students served as quarters for an artists’ colony before being reclaimed for French higher education in 1821.

And it wasn’t just the Sorbonne. The political upheavals of the Revolution and Napoleonic Wars devastated and transformed the entire university landscape in Europe. In 1789 the continent could boast of 143 universities; in 1815, only 83 remained. Major centers of theology, such as Ingolstadt, Halle (see pp. 26–28), and Luther’s Wittenberg (see pp. 23–25), closed their doors, at least temporarily. Others moved or merged with other institutions.

Under Napoleon a new University of France arose in 1808, but it was a university in name only; it was, in reality, a highly centralized, professionally focused network of schools under the Ministry of National Education. A few locations reconstituted theological faculties, but French bishops tended not to trust them given tight state supervision, and Catholic theology largely migrated to church-run seminaries.

The upheaval in France spilled over in varying measures to other Catholic countries. The Flemish University of Louvain (see p. 29), shut down in 1797 and revived after 1815, and the short-lived Catholic University of Ireland (see p. 42) stand out as notable exceptions to the new trends. Not as directly affected by the Revolution, England’s and Scotland’s medieval universities experienced less turbulence in the early nineteenth century, although various modernizing reforms stood in the offing, including those destined to dilute the universities’ Christian ties and revise the nature of theological inquiry.

The handful of colleges in North America at this time were still quite small and for the most part religiously determined (see pp. 39–41); but they too underwent fundamental changes in the course of the nineteenth century, as did Latin American universities that had been modeled on the venerable Spanish universities of Salamanca and Alcalá.

If the closing of the Sorbonne in the 1790s represented the end of one theological era, the founding of the University of Berlin in 1809–1810 marked the beginning of another (see p. 37). Under the able direction of the Prussian minister of education and neo-humanist scholar Wilhelm von Humboldt (1767–1835), the new university came into existence during the Prussian Reform Era (1806–1819), a period of major political change and reorganization precipitated by Napoleon’s decisive military victories over Prussia. A product of the modernizing bureaucratic nation-state, the University of Berlin bore the imprimatur of neither pope nor emperor.

It also lacked a pronounced confessional identity besides a generic Protestantism, due to both the monarchy’s preference and the Kantian-influenced idealist philosophy then popular—which exalted “religion” and “ethics” in general terms as profound, ennobling features of humankind.

Momentously, the new institution also bore witness to the emergence of a novel ethos and ideology of scholarship, Wissenschaftsideologie. Wissenschaft is the German term for rigorous scholarly inquiry. Faculty felt impelled not simply to teach, comment on, and transmit established knowledge—the hallmark of the premodern university—but to create new and better knowledge through rigorous inquiry, documentation of sources and methods, and publication.

The professoriate, as Humboldt put it in a memorandum, must be “continually carrying out research.” Berlin set the stage for disciplinary specialization and the rise of the modern research university. Classical philology (the study of languages) led the way with respect to what today we would designate as “the humanities,” but other disciplines followed suit.

Officials in Prussia’s Ministry of Culture avidly supported Berlin’s research imperative in policies of hiring and preferment, and saw that it spread to other Prussian and German universities. In the course of the nineteenth century, the “Berlin model” or “German model” became internationally synonymous with research and learning of the highest order.

It was widely emulated on both sides of the Atlantic. For many non-German scholars, even a brief stint at a German university could make a career. Discipline-based professional societies, networking, conferences, and specialized journals all received a massive boost from the research imperative radiating outward from German-speaking central Europe.

Theology in a new climate

This new university landscape carried immense implications for academic theology. In the premodern scheme of knowledge, theology was considered one of the three higher faculties, along with medicine and law. Beneath these three stood the lower philosophical or arts faculty, the function of which was largely preparatory. To be sure many figures in the European Enlightenment had championed philosophy’s liberation from any form of intellectual servitude, not least theology, arguing that humans should dare to know things without deferring to traditional authorities. But Berlin would set this in stone for the modern university.

At Berlin Christian theology fully crossed the Rubicon into modernity. The nature of its passage was twofold—part preservationist, part innovative. Rejecting a more radical blueprint proposed by the idealist philosopher J. G. Fichte (1762–1814), which virtually eliminated theology, Humboldt leaned heavily on a plan for reform and organization penned by liberal theologian Friedrich Schleiermacher (1768–1834).

Unlike Fichte, who would also have been glad to scrap the medieval-sounding word “university,” Schleiermacher argued for the preservation of many medieval structures and even for retaining the four-faculty designation of theology, law, medicine, and philosophy. But, he added, “new life needs to be breathed into its Gothic forms.”

With respect to theology, this meant at least three things. First, following Kant (p. 37), Schleiermacher held that arts and sciences should gain primacy over theology in the new institution. Second, the university should be animated by what he called “the modern spirit of science.” Theologians should not be tolerated as pastoral dilettantes and frumpy churchmen; they must become Wissenschaftler, serious scholars, even while charged to prepare young men for church leadership and service, which Schleiermacher also valued.

Finally, theology should labor to make the Christian faith intellectually respectable, especially to its “cultured despisers.” These were modern elites whom Schleiermacher had addressed in his famous Speeches on Religion (1799)—the landmark work that had first established his reputation. The task of modern theology, Schleiermacher wrote in a memorandum, is to unify “the scholarly spirit with the religious sense.” To a younger colleague, he defined the covenant between faith and independent science as one “by the terms of which science is not hindered and faith not excluded.”

Schleiermacher passed away after the University of Berlin had been in operation for over two decades. A day after his death, his colleague on the faculty, church historian August Neander (1789–1850), told students that “from him [Schleiermacher] a new period in the history of the Church will one day take its origins.”

While this accolade was not uttered without good reason, the origins and shaping of modern Christian academic theology cannot be reduced to a single institution or individual; Schleiermacher and Berlin epitomized and institutionalized more pervasive historical forces. These forces would become more pronounced in the course of the nineteenth and twentieth centuries. They also provoked strong reactions and generated other sites of influence, notably the University of Tübingen (see p. 29).

But as a whole, the abiding, multifaceted reality in which Berlin stood foremost shaped compelling and consequential conversations in Christian thought and higher education in the modern era. It did this in ways perhaps not dissimilar to those the University of Paris had once used. But the storm had blown through, the bridge had been crossed, and, though now dethroned, theology had persisted. CH

Thomas Albert Howard is professor of humanities and history and holds the Duesenberg Chair in Christian Ethics at Valparaiso University. He is the author of The Faiths of Others: A History of Interreligious Dialogue.