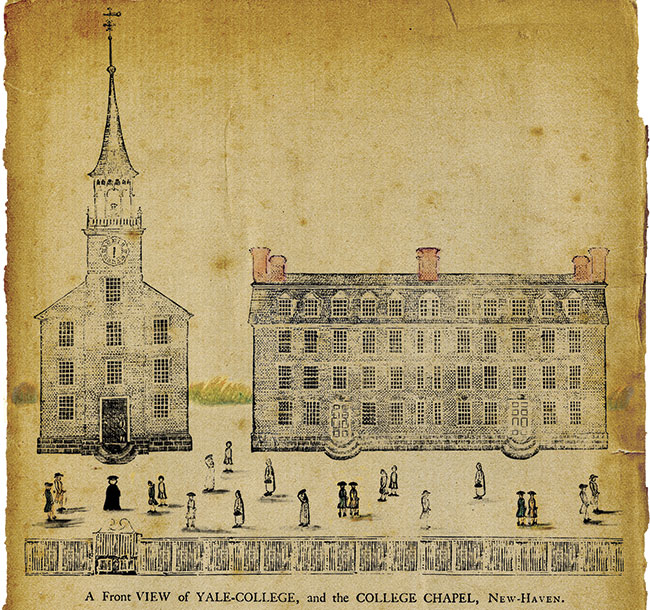 Yale was dedicated to the upraising of spiritual leaders. We betray our trust if we fail to explore the various ways in which the youth who come to us may learn to appreciate spiritual values, whether by the example of our own lives or through the cogency of our philosophical arguments. The simple and direct way is through the maintenance and upbuilding of the Christian religion as a vital part of university life. —Yale president Charles Seymour, 1937

The prestigious schools now called the “Ivy League”—Harvard, Yale, the University of Pennsylvania, Princeton, Columbia, Brown, Dartmouth, and Cornell—once had deep links to Christianity. The Ivies began and long persisted as distinctively Christian training grounds for America’s leaders—first for clergy and then for leaders of all types. At what point, and why, did we get to the secular, ivory-tower image of the Ivies of today?

Foundings: By clergy, for clergy

The Puritans who founded Harvard in 1636 intended to train clergy primarily and civil servants secondarily. Ministers led colonial Harvard and made daily prayer and study of classical languages and texts central, including the Old and New Testaments in their original languages. Yet, within 70 years, some New England Congregationalists had serious questions about the orthodoxy of Harvard and founded the Collegiate School (Yale) in 1701 as an orthodox alternative. Clergy led both institutions and in turn produced the new clergy deemed necessary for the maintenance of a godly society.

Beginning in the 1730s, the British colonies experienced the tumultuous revivals of the First Great Awakening; heated debates over whether ministers and professors were actually converted roiled congregations and campuses. Yale expelled future missionary David Brainerd (1718–1747) for suggesting that one of his tutors had “no more grace than the chair I am leaning upon.”

Conflicts between the “New Lights” who embraced revivalistic religion and the more formal “Old Light” antirevivalists soon prompted the creation of more colleges. In the decades prior to independence, Presbyterians, Anglicans, and Baptists founded schools of their own: the College of New Jersey (Princeton), King’s College (Columbia), and Rhode Island College (Brown). Anglicans were also instrumental at the University of Pennsylvania, while Dartmouth began as Moor’s Charity School, a New Light Congregationalist venture to educate and evangelize Native Americans.

Colonial colleges practiced not only Christian study but also Christian worship. In 1774 Yale’s code of conduct mandated that “The President . . . shall constantly pray in the Chapel every Morning and Evening, and read a Chapter, or some suitable Portion of Scripture.” Daily chapel services were a central part of colonial higher education. Columbia had services similar to Yale’s but liturgically Anglican; the college also gathered at the chapel in times of grief. Beyond regular services Brown’s students all too frequently used their college chapel to eulogize classmates who had succumbed to fevers or other illnesses. Many Brown eulogies survive, bearing witness not only to the precarious nature of early modern life but also to the pervasive religiosity of colonial colleges.

Even during the eighteenth century, the mission of the Ivies was already broadening; they found themselves catering less to aspiring ministers and more to aspiring men of culture. The educational field also widened; after the Revolution, the Ivies became simply the oldest and most prestigious colleges among many. Nonetheless, from the nineteenth century on, the Ivies played at least three influential roles in spreading Christianity and Christian higher education.

First, though their emphasis on ministerial education had diminished, they still provided a Christian education to society’s future leaders. Ministers continued to lead them even into the late nineteenth century, and they maintained their old (and explicitly Christian) curricula, including compulsory chapel attendance and coursework on the classics and theology. The famed Yale Report of 1828 reaffirmed the value of a classical education in forming the character of young men and linked such an education to the well-being of a Christian society. Together the Ivies helped ensure that American undergraduate education would remain substantively Christian for well over a century after the nation’s founding.

Wherever Ivy League graduates went, they reproduced the form and religiosity of the colleges in which they had been trained. A college on the frontier may have had fewer financial or physical resources, but its curriculum still mirrored those back East.

Third, through their theological seminaries, some Ivies did even more direct service to the faith. Harvard, Yale, and Princeton came to have standalone divinity schools, while Columbia affiliated with Union Theological Seminary in New York. The Ivies thus continued to train ministers. They also supported the concept of Christian higher education well into the twentieth century. Notably, from the 1920s to the 1960s, Yale Divinity School was home to a prominent Religion in Higher Education program led by professors Luther Weigle (1880–1976), Clarence Shedd (1887–1973), and J. Edward Dirks (1919–1981). It produced the groundbreaking Yale Studies in Religious Education, researching topics such as college student religious life, religion in historically Black colleges and universities, and changing relations between American colleges and Christian churches.

After a golden age?

But from the nineteenth century to the 1960s, almost imperceptible changes began moving the Ivies first toward liberal Protestantism and then toward pluralism (the belief that colleges should not privilege one religious perspective over others). After the Civil War, Ivy League educators gradually began distinguishing between “religious” and “scientific” forms of knowledge (see p. 37). For both practical and ideological reasons, they put religious ways of knowing outside the bounds of academic study.

As Christianity ceased to form the core of their mission, Ivy League educators replaced it with other, more “universal” ideals such as science and beauty. Even as their shared identity as elite schools housed in stately, ivy-covered buildings coalesced in the early twentieth century, the schools began to move from their foundations.

Though more organic than intentional, the process nonetheless transformed these schools; within a generation of Seymour’s speech at Yale, the Ivies no longer considered Christianity “a vital part of university life.”

Brown and Princeton, the last two Ivies to require chapel attendance, stopped doing so in 1959 and 1964. Thus ended what some considered a golden age in Christian higher education.

But golden ages are not always as they appear. With some notable exceptions, the “Christian” Ivies had long refused to educate both racial minorities and women. Princeton, the last to start awarding undergraduate degrees to African Americans, did not do so until 1947. And only the youngest Ivy, Cornell (founded in 1865), was coeducational at the beginning. It would be a century before the rest admitted men and women equally, with Yale and Princeton leading the way in 1968 and 1969.

In faith’s absence the Ivies struggled to find new foundational principles; most struck on some general concept of social good of which inclusion and diversity were a part. Today Yale aims for “improving the world” through “free exchange of ideas in an ethical, interdependent, and diverse community.” Cornell hopes to “enhance . . . lives and livelihoods”; Brown prepares students “to discharge the offices of life with usefulness and reputation.” While they no longer adhere to their founding faith, their versions of the common good serve as dim reflections of their Christian pasts. CH

Benjamin P. Leavitt is a doctoral student at Baylor University.