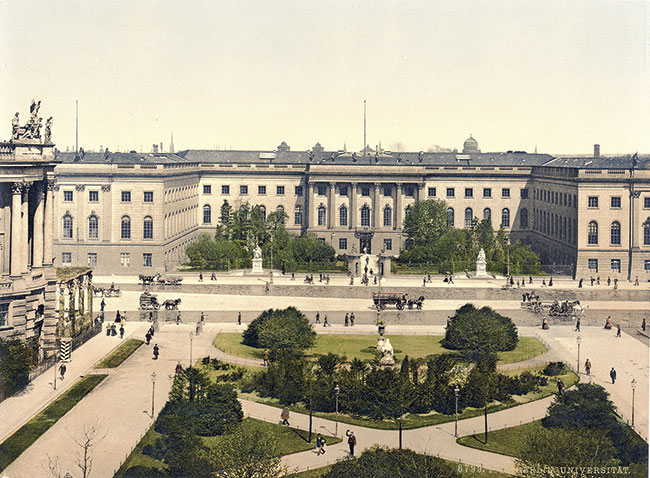 On October 6, 1810, the University of Berlin opened its doors. Europe’s first university founded under purely national, secular control, serving neither pope nor emperor, Berlin became the standard of higher education, revered and imitated around the world. Professors who embodied the “Berlin model” produced original, critical scholarship unprecedented in scope and specialization. Their century, the nineteenth, went down as the age of German footnotes.

But an important question remained unanswered. Could theology, that erstwhile queen of the sciences (see pp. 6–10), be taught and studied in the modern research university? Moreover should it be? Far from being hypothetical, these issues came under intense debate.

A medieval creation, the institution of the university seemed outdated. Recent innovations, scientific and philosophical, were arriving from outside universities: England’s Royal Society, France’s grandes écoles (a new kind of higher education institution similar to modern liberal arts colleges), and other Enlightenment-era academies.

Even before Immanuel Kant’s Conflict of the Faculties (1798) drove a wedge between theology and other disciplines, critics had lamented universities’ close ties to the church, expressed through special privileges accorded to their theology faculties.

What do we do with theology?

Philosopher Fichte (1762–1814) entertained the most radical vision: eliminating three of the four traditional faculties. He argued that the “higher” faculties—theology, law, and medicine—existed only because the state needed trained priests, lawyers, and medics. Only the “lower” faculty, philosophy, dedicated to the cultivation of pure knowledge—Wissenschaft in German—should remain. He believed that if theologians study anything legitimately based on reason, not revelation, then those topics could be reassigned to disciplines such as history or philology.

Like Fichte, theologian Schleiermacher (1768–1834) identified philosophy as the heart of the university. But Schleiermacher argued for largely retaining the traditional structure inherited from the Middle Ages. Along with Schelling (1775–1854), also a philosopher, he identified theology, law, and medicine as contributing to human flourishing because they are practical. Theology exists, he argued, because the church needs clarity about doctrine and practice. Theology belongs in the university because the public has an interest that this be done well—just as it wants physicians with good medical educations and judges with proper understandings of law.

But theology also needed to engage with Wissenschaft. In Schleiermacher’s scheme professors would be appointed on scientific, not confessional, grounds. If they did not contribute to philosophy, then they deserved to be excluded from the university. He therefore proposed two relationships for theology: practical, training for church leadership; and academic, redefining theology’s methods along scientific lines.

Ultimately Schleiermacher won and secured for Berlin the continued presence of a theology faculty. The influence of his work was remarkable. But posterity also revealed tensions in his arrangement: theology’s purported scientific character could (and did) bring it into conflict with the church. This sparked new challenges, as theology found itself torn, once again, as Tertullian had said, between Jerusalem and Athens.

Zachary Purvis, author of Theology and the University in Nineteenth-Century Germany