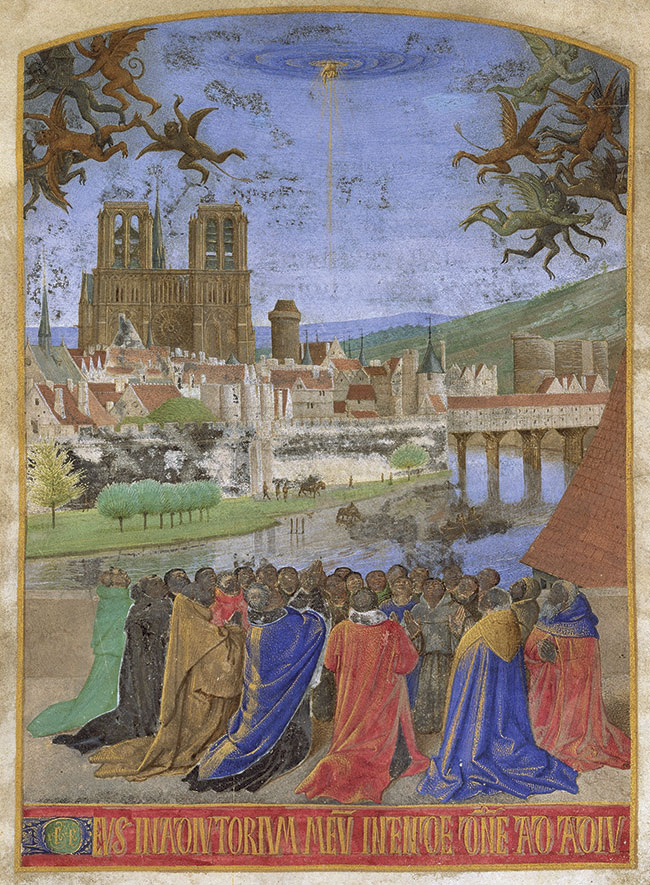 [ABOVE—Jean Fouquet, The Right Hand of God Protecting the Faithful against the Demons Tempera and gold leaf on parchment, c. 1452 to 1460—Robert Lehman Collection, 1975 / [Public domain] The Metropolitan Museum of Art]

On a dark wintry day, a small boat with a handful of passengers crossed the stormy English Channel bound for France. It carried John of Salisbury (c. 1120–1180), secretary to Thomas Becket (c. 1118–1170), the English archbishop who in a few years would meet a bloody end at the hands of King Henry II. Now, in 1164, storm clouds of conflict between king and archbishop were gathering; Thomas sent John ahead to prepare for his own coming flight from England into exile.

Soon John arrived in Paris, where he had studied years earlier—and he wondered at its change. Now with multiplied schools, he saw a bustling and lively town filled with clergy, teachers, and students hastening to their studies. He wrote that, like Jacob awakening from his dream of the angelic ladder, “God is in this place and I was unaware of it” (Gen. 28:16).

Medieval Paris was truly a city of scholars—especially scholars of theology and sacred Scripture. In the decades following John’s homecoming, a university emerged there that stood like a giant among medieval universities, not least for its new and unusual combination of theology and liberal arts faculties—a development that would become a model for imitation and adaptation by many later schools.

The roots of Paris’s synthesis of theology and the liberal arts long predated John’s boat trip. The pre-Christian classical triad of liberal arts had equipped students to read well (grammar), to compose and deliver public speeches (rhetoric), and to discern and argue whether statements were true or false (logic or dialectic).

In the late fourth century, church father Augustine of Hippo (354–430) argued in On Christian Doctrine (397–426) that preachers should study rhetoric to improve their preaching. Better preaching, Augustine argued, would reveal the inner depths of the scriptural texts, showing forth God’s love and kindling love for God in the heart. Ultimately, strong biblical preaching would help produce strong Christians.

Medieval scholars and teachers revived and adopted this scheme, but focused more closely on grammar and logic. Studying grammar may seem to us rudimentary or dull, not a subject to bring scriptural texts to life. But for the medieval student, studying grammar meant more than learning the rules of constructing sentences. Separate schools already existed in churches, especially bishops’ cathedrals, to offer free lessons in reading and writing Latin. Higher teachers, or “masters,” assumed their students would arrive with that foundation in place.

Grammar, as a liberal art, pried deeper into the meanings of words, literary devices, and, most important, the moral or ethical lesson flowing from the text. Students read widely through the church fathers and the classics and used that learning to understand and digest the meaning of biblical texts.

While all the liberal arts were meant to fit together and support each other, like a ladder for the student to climb, grammarians and logicians often conflicted and collided. Improving conditions in twelfth-century western Europe meant more students sought learning in schools and more scholars sought appointments as teachers; teachers became competitive among themselves to attract and to retain their students.

In these competitive schools, medieval teachers of grammar began to find they had rivals among logic specialists. Grammar may reveal what a text means, but logic is the art to discern what is true from what is false. Christ is the Truth, after all, and so logic is a preeminent Christian liberal art—at least so said Peter Abelard (1079–1142), who later in life sought to fuse logical study of the faith with a disciplined life of prayer.

Abelard’s career illustrates how this ongoing debate between grammarians and logicians put Paris at the epicenter of a great resurgence of learning, adding drama to abstract questions. For instance, students once gathered at the cathedral school of Paris to hear famous teacher William of Champeaux (c. 1070–1122) lecture on grammar. Abelard, one of these students and a specialist in logic, challenged William midlecture with difficult questions; sometimes William could not give good answers. Abelard scored points against his famous teacher and bolstered his own reputation. Soon after, he started his own school on the outskirts of Paris and drew many of William’s students with him.

Laying rhetorical siege to the city, Abelard debated, as if jousting, other rival teachers in Paris. He reported success upon success and after a few years, ended up taking charge of the now-retired William’s school.

Seeing the opportunity many more masters opened schools in Paris. Abelard’s success encouraged these new independent schools while his fame drew many students to Paris. This encouraged more teachers to relocate, and soon Paris became home to flocks of students seeking learning.

School of the masters

Other cities also grew into centers of study and learning that attracted droves of students and boasted successful schools. In southern Italy, for example, Salerno hosted a famous, old medical school. In northern Italy, Bologna was home to early scholars, like Gratian, who organized and ordered church laws and regulations (called canon law). Bolognese scholars also revived the study of Roman law. Roman law and canon law served as models for ordered governance and church discipline. Law students went on to rise in feudal and church leadership, drawing on their studies to reform abuses and corruption.

More likely to be older and wealthier, these law students had already formed important connections in the world. As a result the University of Bologna organized itself more quickly than Paris (see p. 29). Bologna’s university also looked different because the students ran it. Organized into groups called “nations” according to their homelands, they elected student officers who gave rules and regulations to their masters: when classes should run and what books would be taught. The masters functioned like hired contractors.

The University of Paris, by contrast, was a masters’ university. For many trades in medieval towns, craftsmen gathered in associations or guilds. Guilds could protect individual craftsmen, win special rights and privileges for them, and set up rules for their trade. A guild could also be called a “university” (universitas). Beginning in the mid-1100s, masters of schools incorporated informally into such a network. They were more concerned with learning and study than with legal rights and status; no formal founding document, such as a charter or contract, marks the University of Paris’s origin.

The University of Paris became the preeminent center for philosophy and theology. For medicine one went to Salerno; for law to Bologna. But the University of Paris had both a vibrant faculty of the liberal arts and a faculty of theology. Here again—as among the grammarians and logicians earlier—the rivalry between these two faculties caused conflict and yet fruitful consideration of the way theology and the Bible relate to human reason.

The arts faculty taught the trivium and the quadrivium. These seven arts had pagan inventors; they helped students read the Bible but they did not originate with the Bible. As a result the arts offered a perspective on the world and reality potentially separate from the perspectives offered by theology. Conflict arose in the 1200s, when long-lost scientific books of Aristotle (preserved in the East) entered Paris.

Aristotle’s books of logic had held sway in education for centuries, but these new books revealed his arguments for ancient ideas that conflicted with Christian orthodoxy. For example he believed that the world is eternal, that God did not create freely or consciously, that God does not know individual persons, and that no afterlife awaits humans after death.

Paris in the 1200s became the flashpoint of this Aristotelian thinking. Members of the theology faculty objected to Aristotelian ideas that stood contrary to the Christian faith; some masters made efforts to prevent these books from being read and taught in Paris. Other theologians, especially Albert the Great (1200–1280), Thomas Aquinas (1225–1274), and Bonaventure (1221–1274), sought to show the essential agreement of faith and reason as different, but not contrary, ways of knowing. Aquinas in particular led the effort to examine Aristotle’s arguments.

At other universities, like Bologna, no similar conflict between the faculties existed because there was no theology faculty. Only at Paris did a theology faculty teach alongside a liberal arts faculty. Hence Paris’s debates on the relationship of faith and reason, and the peacemaking policy of those like Aquinas, stand as key monuments in the larger Christian intellectual and educational tradition.

The University of Paris won early and faithful allies. The Capetian kings of France gave gifts, protection, and privileges to the university. And medieval popes recognized early the potential for allying themselves with a university cultivating well-educated theologians and teachers.

Better living conditions meant more people could be educated, and this called for more teachers of the faith. With new heresies springing up, most famously the gnostic Cathars of southern France, well-trained theologians were needed to recognize and correct errors; some might even persuade strays to return to the faith. Increasing contact with learned Muslim, Jewish, and Eastern Christian scholars called for theologians to debate the truth of the faith. Moreover the pope and other leaders had long struggled to reform abuses and corruption among church officials—the university seemed a likely ally to bolster these efforts.

So popes became strong patrons of the University of Paris, granting the right to certify graduates as teachers of theology with a special license that would allow them to teach, theoretically, anywhere. This universal license strengthened Paris’s magnetic attraction to would-be teachers across Europe.

Other universities later established theology faculties, ending Paris’s monopoly. However, the University of Paris remained a gold standard and was often called upon to judge weighty and difficult matters (see p. 22). Though it enjoyed the patronage of the pope, the king of France, and others, the theology faculty also retained independence; its debates and judgments took on weight for many as coming from an authority.

In the later Middle Ages (1300s–1400s), more universities began to appear across Europe. Most began with a founding gift and charter from a pope or emperor outlining structure and regulations. Many modeled themselves on the University of Paris and, as a result, often received similar privileges and rights.

Yet even in that same period, a new challenge emerged as Renaissance humanists began to imagine another model and a new curriculum. The ensuing debate would profoundly influence the sixteenth-century Reformation and beyond—long after Abelard’s disputing voice was at last silent, Aquinas’s peacemaking between pagan and Christian thought was a matter for history books, and John of Salisbury’s last journey ended. CH

A guild of learners

What was it like to study at Oxford and Cambridge in the Middle Ages?

A cascading failure to meet the common good