Issue 71 Huguenots and the Wars of Religion 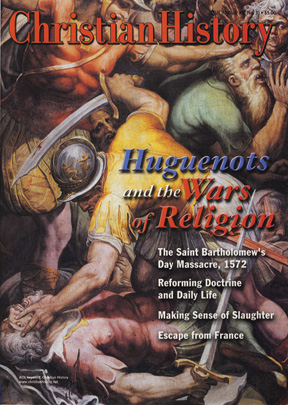 Getting Serious About Sin

Pleading the Cause of Christ

In the Prefatory Address to his Institutes, John Calvin defends both his doctrine and its battered believers.

Huguenots and the Wars of Religion: Did You Know?

Interesting & unusual facts about the Huguenots—and their enemies.

From the Editor — Fracas Francais

The War of the Three Henris is a microcosm of the battles waged in France.

Suspicious and scared, the king of France ordered a political assassination. Then the real killing began.

Order in the Church

Reforming doctrine was just the beginning of a vigorous campaign to restructure Christian life—at church, at home, and in each believer’s heart.

Reformation on the Run

How one of France’s greatest poets made sense of the Huguenot tragedies.

Huguenots and the Wars of Religion: The Gallery — The Inner Circle

Huguenot intrigues swirled around a handful of key figures.

As obscure now as his tiny native village, Pierre Viret once captured the hearts of the Huguenots.

As repression became a way of life in France, Huguenots faced three choices: convert, go underground, or risk everything to reach le Refuge.

The French Wars of Religion: Christian History Interview — A New War of Religion?

Pluralism and evangelicalism collide in contemporary France. A conversation with Sébastien Fath.

Sébastien Fath and the Editors

More resources on the French Huguenots and