Issue 76 The Christian Face of the Scientific Revolution 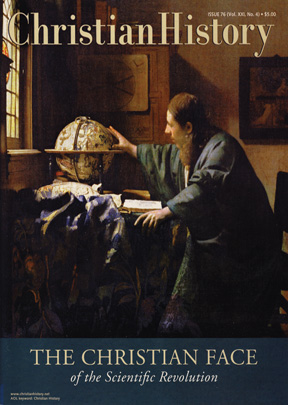 Scientific revolution, Did you know?

Interesting and unusual facts about Christians in the scientific revolution

From the Editor — The Specter of Enmity

Galileo and the Powers Above

The convoluted tale of a faithful Catholic caught in a web of theological inflexibility, papal power, and his on political naivete.

If there were a true demonstration

Major newspapers interpreted the pope’s speech as an exoneration of Galileo.

A God of Math & Order

The new science rode in on the shoulders of theological ideas.

Did the Reformers Reject Copernicus?

Some defenders of secular science say they did. What’s the real story?

16th-century students of anatomy saw the hand of God in the intricacies of the body.

A Priest Serving in Nature’s Temple

Robert Boyle’s career blended faith, doubt, and the use of science to heal disease and fight atheism.

Blaise Pascal pioneered in math and physics but drew faith from revelation alone.

Isaac Newton wrote theology and hoped his scientific theories would help people believe in God. But he harbored a deep secret . . . .

The Royal Society defended religion but laid the groundwork for irreligion.

the editors and David Lindberg

The Christian Face of the Scientific Revolution: Recommended Resources