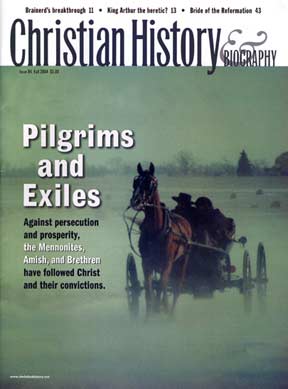 Grace at the Negotiating Table

Was King Arthur really a Pelagian?

The oldest documents make Arthur appear a Christian—if he existed.

A People of Conscience

How America’s plain people first arose in Europe as a discipleship movement repressed by the state church.

David Brainerd: I could scarce believe he used me.

Pilgrims and Exiles: Did You Know?

Shaken Up by the Peace-Lovers

A trip through Pennsylvania’s Lancaster County.

Monastery in a war zone, affluent Essenes, and Luther’s loo.

The Germans Have Landed

Once William Penn welcomed the freedom-seeking Anabaptists to his colony, they spread and flourished.

Making sense of the colorful, complex tapestry of Amish, Mennonites, and Brethren.

Key dates connected with the Anabaptists.

One of the most visible practices among the American Anabaptists, the Brethren love feast exemplifies humility and community.

Why have American Anabaptists lived in protest against the modern world?

From Mutual Aid to Global Action

How the Anabaptist emphasis on practical acts of love led a tightly knit enclave to reach out to the world.

Negotiating with the Modern World

In the late 19th and early 20th century, modernity caught up with the Anabaptists.

Wibrandis was an ideal helpmate.