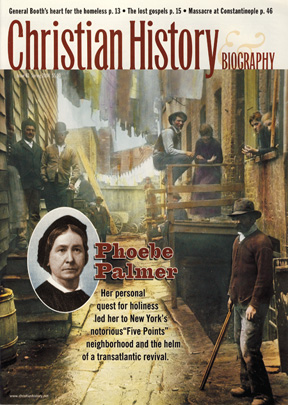 Contrary to stereotype, the joy of the holiness life often spilled over into social ministry.

Phoebe Palmer: Did You Know?

Phoebe Palmer: From the Editor

From fire on Mount Athos to Saxon king crosses.

Did you know men slept on the Bridges?

Transformed by her child’s fiery death, Phoebe Palmer lit the flames of revival on two continents.

Why the lost gospels were really lost

The 19th-century holiness revival took many forms as it swept across denominational boundaries.

I received my commission from Him, brother

How women preachers built up the holiness movement.

Christians have long desired to live lives unmarred by sin—and have walked many roads on the quest.

Social, spiritual, and political forces converged to create an environment for a revival.

How I entered George MacDonald’s world.

All of Christian History in 6 Hours

This audio tour de force is strong meat for a mature Christian audience.