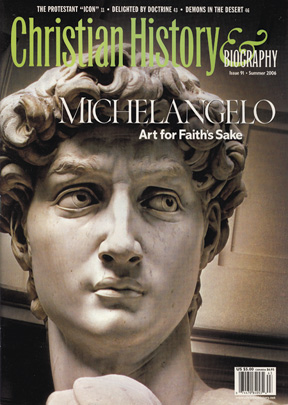 Michelangelo: Did You Know?

Interesting facts about Michelangelo and the Renaissance

Michelangelo: From the Editor - A Flood of Pictures

We've all seen it. An entire generation grew up with this image of Jesus in their minds. But who made it, and how did it become so popular?

Scripture on the Ceiling

Michelangelo's frescoes in the Sistine Chapel make a profound statement about the creation story— and the artist's own creativity.

The theme of Christ's death followed Michelangelo through his whole life.

The Art of Grace

Justification by faith, in living color.

Five artists who captured the imagination of the church

Fighting Demons In The Desert

How a book about one man's radical quest for God helped to redefine Christian discipleship and launch the monastic movement.

Portrait of the Artist as a Servant

The masterpieces of Fra Angelico showed painter Bruce Herman the beauty of Christian truth—and his own calling as a Christian artist.