Beauty and goodness, and grief and pity, alive in the dead marble," began a poem by one spectator awestruck by Michelangelo's earliest masterpiece: the marble Pietà that now stands in St. Peter's Basilica in Rome.

The term pietà (meaning both “pity” and “piety”) is used to describe works of art picturing the dead Christ held by his mother after he has been taken down from the cross. In Michelangelo's sculpture (c. 1497-1500), Mary cradles the body of her son in her lap. The work shows a breathtaking level of skill for a 25-year-old artist and emulates the delicate beauty and utter calm of ancient Greek and Roman statues. Influenced in his youth by the humanist circle around Lorenzo de' Medici, Michelangelo came to believe that art should not merely copy reality but strive for the ideal.

The quiet beauty of the Pietà has Christian significance as well. When contemporaries described the Pietà as “perfect,” they were making a theological statement, which Michelangelo shared: Christ's outward physical perfection mirrors his inner spiritual perfection as the Son of God. There is no blood evident, and Christ's wounds are barely visible. His calm beauty points away from his suffering and death and toward his ultimate victory.

Decades after carving the St. Peter's sculpture, when he was in his 60s, Michelangelo returned to the image of the dead Christ in drawings and sculptures. He continued to explore this theme until his death. The St. Peter's Pietà was a public work commissioned by a French cardinal. But the later Pietàs and related drawings were private, highly personal creations bound up with the artist's deep belief in Christ's gift of salvation to those who have faith. They also reveal his awareness of his own sin and imperfection and his longing for redemption.

The impetus for Michelangelo's return to the image of the dead Christ was the strengthening of his faith in the 1530s, nourished by his friendship with Vittoria Colonna. Around 1540, Michelangelo presented Colonna with an elaborate graphite drawing of a Pietà group. In the St. Peter's Pieta, the position of Christ in Mary's lap had focused devotional attention on Mary. In the drawing for Colonna, the focus is on the upright Christ offering himself for the sin of humanity. His body is wedged between his mother's legs while her arms are raised in prayer. His love, humility, and grace have overwhelmed her, and she knows that her son will live again and redeem the world. Her faith symbolizes that of all believers.

On the cross is written a verse from Dante's Paradiso: “They think not how much blood it cost.” In Dante's poem the blood refers to the efforts of preachers and martyrs to spread the gospel, but for Michelangelo it echoes the Catholic reformers' message that salvation comes from Christ. The word cost, as historian Alexander Nagel has observed, also reminds the viewer of the free yet priceless gift of Christ's grace, in contrast to the prevailing system in which prayers, indulgences, and other good works counted toward salvation.

The faith of Nicodemus

Around 1547 or 1548, while he was in Rome, Michelangelo began carving a marble Pietà that he intended for his own tomb. (It now stands in the Museum of Cathedral Works in Florence.) Though a personal work, it was the most ambitious single sculpture he ever attempted, consisting of four more-than-life-size figures: Christ in the center, his mother Mary to the right, Mary Magdalene to the left, and Nicodemus above. Christ's twisted pose intensifies the love that flows between him and the mourners. Mary's eyes are closed, and her head is joined with her son's. Mary Magdalene is embraced by Christ's right arm.

Perhaps the most intriguing figure is Nicodemus, whose bearded face Michelangelo modeled on his own. According to legend, Nicodemus was a sculptor, and therefore Renaissance sculptors sometimes portrayed themselves as Nicodemus. Michelangelo's belief in salvation by faith also closely followed Christ's teaching to Nicodemus about faith and eternal life in John 3:1-21.

As Nagel has pointed out, Michelangelo deliberately gave the Nicodemus figure a unifying role in the sculpture: With one hand he holds the arm of Christ that embraces the repentant sinner Mary Magdalene, with the other he presses the Virgin Mary against her son, while he himself bends forward over all the figures. Michelangelo is both Nicodemus, physically holding the group together and helping to convey Christ's gift to humanity, and the sculptor, laboring to convey the mystery of grace.

Michelangelo had wanted this piece to be the crowning statement of his art and his faith. But after eight years of working on the sculpture, he gave up and attacked it with a hammer, breaking both of Christ's arms and his left leg. (Michelangelo's pupil, Tiberio Calcagni, later restored the detached parts, except for the leg, which is now missing, and carved the rest of Mary Magdalene.) Michelangelo claimed that a servant's persistent nagging to finish it, along with several mishaps (a piece breaking off of Mary's arm, the discovery of a crack in the marble), made him hate the work. If another servant had not persuaded him to give the sculpture away, he would have smashed the entire thing.

There may have been another reason why Michelangelo disliked the work. Vasari later described a nocturnal visit to Michelangelo's workshop when his “eyes wandered to the leg of Christ on which he [Michelangelo] was working and attempting to alter, and in order that Vasari might not see it, he let the lantern fall and they were in the dark.” The leg was originally slung over the Virgin Mary's thigh, a gesture that symbolized marriage between deities in classical art. Michelangelo was trying to use the love between Christ and Mary to symbolize the mystical union of Christ and the church. But in this case, the challenge of reinvigorating a traditional religious subject with elements from classical art threatened to defeat him. He broke the sculpture, possibly because he feared the erotic implication of the slung leg. Never again, in his drawings or sculptures, did he show Christ in Mary's lap or between her legs.

Michelangelo left many of his works unfinished, especially as he grew older. Partly, this was because he began to realize that the ideal beauty to which he aspired would always surpass the limitations of the material and his skill to shape it. One historian, Paul Barolsky, has suggested that the artist felt himself to be, like his sculptures, unfinished—sinful, in need of reform.

When Michelangelo was in his 80s, he began what is known as the Rondanini Pietà (now in the Castello Sforzesco in Milan). A pupil reported that Michelangelo was working on the Pietà, or another sculpture of the same subject, six days before his death in 1564. As in the case of the Florence Pietà, he made the sculpture for himself, though his purpose is unknown. In this work, more than in any of his others, Michelangelo abandoned physical realism and Renaissance artistic principles, carving a simplified conception of Christ's sacrifice.

He may have come up with the initial idea for this sculpture even before he destroyed the Florence Pietà in 1555 and started a first version that he later radically reworked. Only the right arm of Christ remains from the original version, connected to the present version by a thin marble bridge. We don't know why Michelangelo left this muscular arm when he could have removed it. Whatever the reason, its presence emphasizes the stark contrast between the style of his earlier work and the rough anti-physicality of the final sculpture.

Michelangelo chose to severely truncate the block of marble after he had partially carved the first version, leaving only a thin, curved piece of stone. Mary stands above and behind her delicate, almost weightless son. She no longer supports him; his shoulder is pressed against her chest. The sense of human drama articulated by gesture and movement is gone. The starkly fused figures still convey Christ's intense love for humankind, but in the simplest terms, without the nuances of earlier Pietàs.

Neither Michelangelo nor his earliest biographers gave any explanations of this work, and historians have interpreted it in many different ways. In a sense, the Rondanini Pietà continues his quest for the ideal beyond mere physical reality that he began with early works such as the St. Peter's Pietà. “Lofty, soaring, erect, the recarved group suggests less a Pieta than a Resurrection, the ultimate Christian victory,” writes Frederick Hartt. “The subject of the Resurrection … has infused the spectacle of sacrificial death with the promise of the hereafter.”

In his Pietàs, Michelangelo traveled the road from public commissions to personal creations, from works that were highly polished to ones that were unfinished, mutilated, and simplified, from idealized beauty to barely articulated form. Given the religious and artistic divisions in 16th-century Italy, he experimented in private, struggling to find ways of expressing artistically his conviction that what ultimately matters is Christ's gracious offer of salvation. He abandoned conventional visual language completely in the Rondanini Pietà, his final work. But to the end of his days, his faith in Christ's sacrifice and redemption demanded that he wrestle with stone to bring dead marble to life.

The Art of Grace

Justification by faith, in living color.

Five artists who captured the imagination of the church

Fighting Demons In The Desert

How a book about one man's radical quest for God helped to redefine Christian discipleship and launch the monastic movement. 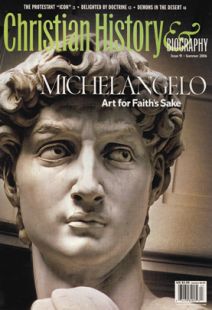