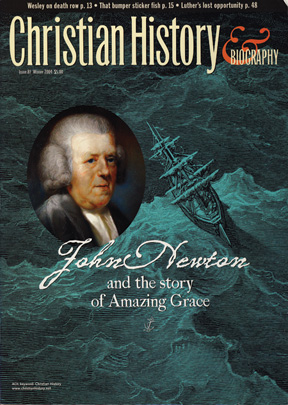 John Newton: Did You Know?

Interesting and unusual facts about John Newton’s life and times.

From Bede’s world to Whitefield’s thumb.

John Newton: From the Editor — New life-and a “new” magazine

The magazine gets a new name.

Wesley’s word to a condemned malefactor.

His was a tale of two lives, with God at the pivot point.

Christian History Timeline: The Life and Times of John Newton 1725–1807

Chronology of events related to the life of John Newton.

Newton joined those who laid the groundwork for British evangelicalism—from within the Established Church.

The Captain & the Castaway

The tempest-tossed friendship of John Newton and William Cowper.

Pastor to the Nation

Newton responded to thousands of requests for spiritual counsel with letters advising the lowly and the great.

Not a Synod but a Salon

The evangelical underground plotted England’s and the world’s salvation at a London pub.

At Marburg, the last hope of a united Protestantism ran aground on the Last Supper.

How Amazing Grace went from ignored in Britain to acclaimed in America.