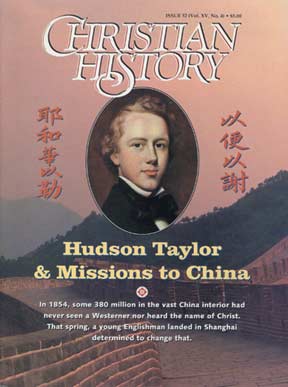 Hudson Taylor & Missions to China: Did You Know?

Remarkable or little-known facts about Hudson Taylor and missions to China.

From the Editor — Surprised by China

This issue quickly got out of control as we discovered more and more fascinating aspects of Taylor’s life and mission.

Whether he was battling despair or floating on euphoric faith, Hudson Taylor drove himself—and the gospel—ever deeper into China.

Missionaries who dressed like the Chinese suffered a few snags.

The earliest China missionaries started with the elite.

Chronology of events associated with Hudson Taylor and missions to China.

The Boxer Rebellion revealed the courage of missionaries—and the resentment they sparked.

Hudson Taylor and Missions to China: A Gallery of Gritty Pioneers

It took some doing for Chinese Protestants to get free of missionary control.

Was It Worth It?

Western Protestants poured money and people into China for a hundred years. Did it make a significant difference?

Interview — The Miracles after Missions

The missionaries are forgotten, but the prospects for Chinese Christianity have never looked better.

What do you pack if you’re going to China as a British missionary in 1865?

Resources for those interested in learning more about Hudson Taylor and Chinese missions.