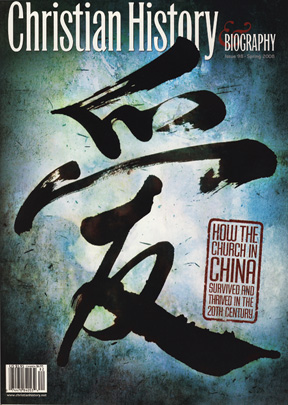 Editor's letter: The race marked out for us

The dynamic growth and unique challenges of modern Chinese Christianity

From Foreign Mission to Chinese Church

Missionaries in China were hampered by pressures from home, mistakes in leadership, and identification with the West, but they planted the seeds that would someday yield an astonishing harvest.

A Gallery of Missionaries

Some notable Christian workers in China.

Nee had a gift for calling people to a deeper spiritual life.

Worshiping Under the Communist Eye

An Evangelical Patriot and Critic

As for Me and My House

The golden age of Protestantism in China

Caught Between Rome and Beijing

Chinese Catholics have endured devastating division in the past century

Through a century of political turmoil and disillusionment, waves of Chinese intellectuals have come to Christ

The church in China: Recommended resources

Dig deeper into this issue’s theme.