What should Christians cook? 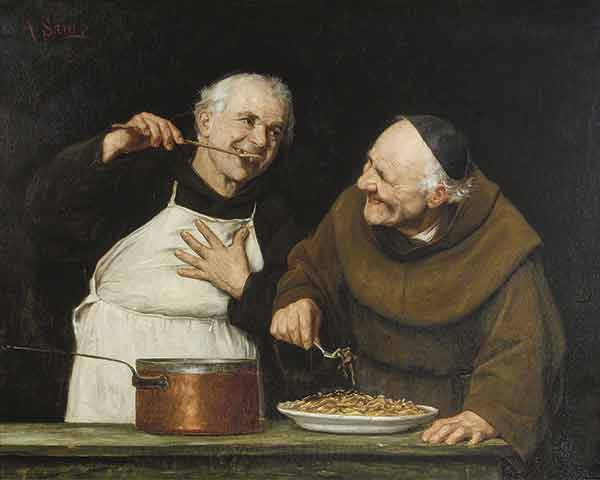 On a Friday during Lent in 1522, a respected Swiss printer named Christoph Froschauer hosted a home-cooked supper of sausages for his hard-working employees, inviting town dignitaries—and pastor Huldrych Zwingli—to join in.

Such brazen defiance of the church’s fasting laws sparked a public uproar and led to Froschauer’s imprisonment. Zwingli, however, defended the meal, preaching that “Christians are free to fast or not to fast because the Bible does not prohibit the eating of meat during Lent.” And so the Reformation in Zurich began . . . thanks, in part, to a plate of sausages.

For centuries the church’s seasonal rhythms of feasting and fasting had shaped the way people ate, resulting in a flourishing fish industry and a host of dietary regulations and creative meat and dairy substitutions for use during Lent. The Reformation didn’t just shake the fault lines of Western Christendom; it reshaped the Christian diet.

The Reformers drastically reduced the number of holidays and feast days and did away with Lenten fast requirements. Cookbooks soon revealed widening cultural gaps; Catholic and Orthodox countries divided recipes into separate meat and Lenten dishes; those touched by the Reformation did not. They’ll know we are Protestants by our cookbooks, apparently.

The Reformation wasn’t the only force of change in the Christian kitchen. The next few centuries saw an avalanche of cultural shifts. Colonies and new trade routes introduced exotic foods, spices, and beverages—from tea to chocolate to turkeys. Innovations such as forks and restaurants led to an explosion of culinary creativity. Urban growth meant fewer family farms and an expanding market for processed food—spurred on by new technologies, new appliances, and new preservation methods such as refrigeration and canning. Advances in chemistry led to better understandings of nutrition and digestion.

Even though the Reformation had released many Christians from ecclesiastical control of their stomachs, it didn’t stop them from thinking about the stomach’s effects on the soul: what does it mean to cook Christianly? When we are gathered to break bread together in our homes, does it really matter who made the bread, how it was made, and how much we eat?

By the end of the nineteenth century, a recurring theme had emerged: the push for simple, natural, and healthy cooking in contrast to over-indulgent eating and the expensive, highly processed ingredients of the industrial-age diet. This touched on a nostalgic longing for a simpler past—when godlier forebears ate plain, honest food and valued frugality over worldliness. In many cases that nostalgia reached all the way back to Eden: what was good enough for Adam and Eve’s dinner table should be good enough for ours.

A pioneer of this movement was Presbyterian minister and traveling lecturer Sylvester Graham (1794–1851). Graham earned the moniker “the prophet of bran bread” from Ralph Waldo Emerson, and famous evangelist Charles Finney was a Grahamite.

Repulsed by an American diet saturated with greasy beef, salted pork, and hard cider, Graham preached moderation, temperance, chastity, and vegetarianism (see “What would Jesus buy?,” pp. 36–39). Spartan “Graham boardinghouses” sprung up around the country, offering a kind of gastric redemption, and the Battle Creek Sanitarium in Michigan was founded by Seventh-day Adventists inspired by Graham (see “The sacred duty,” p. 40).

In 1876 that vegetarian health resort gained a new director, John Harvey Kellogg (1852–1943), soon to revolutionize the American breakfast table by inventing cornflakes. His wife, Ella, developed appetizing vegetarian substitutions and imitation meats in her experimental kitchen and encouraged healthy eating through a cookbook and a cooking school.

In fact, as literacy spread, the nineteenth century saw a proliferation of cookbooks teaching girls and women how to run a proper middle-class kitchen, a duty imbued with spiritual significance. The Victorian mother was the “angel in the house” and the goddess of the kitchen, so some argued that she should avoid the forces of modernization that made domestic tasks more efficient and produced easy, cheap, processed food.

In her 1861 cookbook Christianity in the Kitchen, Mrs. Horace (Mary) Mann proclaimed, “There is no more prolific cause . . . of bad morals than abuses of diet.” The wrong kind of eating dulled the mind, soured the temper, and weakened the will, leading to moral lapses. Many others agreed. Though not a vegetarian, Mann shared Graham’s abhorrence of food additives and “adulterated” ingredients (she advocated the use of a microscope in the kitchen to discover them). She aimed to bring the best of current scientific wisdom to the family kitchen.

Dishes like turtle soup and even wedding cake were bad for the digestion and “should never find their way to any Christian table.” Cooking fresh, locally grown food (especially from one’s own garden) simply, without excessive seasoning, honored the delicious, natural, God-made flavors of each meat or vegetable and aligned eating with reason and conscience to control appetites. When a family gathered for a meal, Mann said, they should invite the spiritual presence of Christ and remember his words at the Last Supper:

If every “Grace before meat” should recognize that we are to eat, not to gratify ignoble appetites, but to build up purely and devoutly these temples of the Holy Spirit . . . we should be less likely to pervert God’s beautiful provision of enjoyment in eating.

A Christian housewife cooking food for her family, from this point of view, was not just slaving away over pots and pans; she was doing her part to save the human race from moral and physical degradation.

Community cookbooks, created by the women of a church or other organization to raise money for charitable causes, emerged as a popular genre during the Civil War and became ubiquitous over the next century. In the preface to an 1876 cookbook, the ladies of Plymouth Congregational Church in Des Moines, Iowa, waxed eloquent about the moral importance of a well-prepared, home-cooked meal:

Good cooking is a valuable ally of godliness. Dyspepsia is the stronghold of depravity. An abused and impaired stomach is but another name for the eclipse of faith. Pernicious moods, harmful introspections, and horrible bug-bears of suspicion and doubt are the portion of him who has been so unfortunate as to damage his most important vital function by feeding on food spoiled for human uses . . . fit only for creatures with the digestive apparatus of the ostrich.

Through instructions on avoiding disgusting one’s family with “ill-cooked meats, insipid soups, and spoiled vegetables,” the good ladies of Des Moines also aimed to “check the growing tendency to seek divorce, by removing one of the causes of matrimonial infelicity.”

In an 1886 essay in Good Housekeeping, “How to Eat, Drink, and Sleep as a Christian Should,” Margaret Sidney looked beyond the food itself by using flowers and nice linens at the table to “shed a Christian influence over every thought and act.” At the Victorian family dinner table, through strict regulation of the family’s diet and intentional conversation, Christian parents tried to mold their children’s characters, form good manners, and impart religious instruction.

In this they stood in the tradition of the Reformers, who had emphasized the edifying nature of table talk. “For discourses are the real condiments of food,” Luther had said, “if they are seasoned with salt. For word is whetted by word; and not only is the belly fed with food, but the heart is also fed with doctrine.”

One of the underlying concerns of nineteenth-century Christian food reformers—the link between health and personal morality—still echoed in the twentieth in the form of Christian weight-loss programs. The phenomenon began in 1957 when Presbyterian minister Charlie Shedd published Pray Your Weight Away. To Shedd obesity was the outward sign of an inward spiritual failure—worshiping food rather than God. You could weigh your sin by stepping on a scale, he claimed.

Preaching the power of prayer and recommending exercises set to the rhythms of Scripture passages, Pray Your Weight Away became a best-seller and gave birth to an entire industry. The 70s saw a boom in books like C. S. Lovett’s Help, Lord—The Devil Wants Me Fat (1977), which blamed Satan for food temptations and advocated extreme fasting, and Maria Chapian and Neva Coyle’s Free to Be Thin (1979), which sold 1.4 million copies and eventually spawned Overeaters Victorious.

As you love God, you will not be able to bow down to the brownies! It will be repulsive to eat the second half of the hamburger. You will despise worshiping the food. You cannot serve both God and someone or something else, therefore, the Promised Land is in sight—you will lose weight!

Other Christian diets focused on the biblical basis for nutrition, not on the supposed idolatry of the dieter. George Malkmus, who had been converted at Billy Graham’s 1957 New York crusade, claimed that switching to God’s original dietary intentions in the Garden of Eden (organic, plant-based, mostly raw and vegan food) cured him of colon cancer and could eliminate other sicknesses as well; he called it the Hallelujah Diet.

The Maker’s Diet (or Bible Diet) promoted by Jordan Rubin in the early 2000s looked to Old Testament dietary laws for instruction on how to eat, resulting in a diet characterized by organic fruits and vegetables, “clean” meat and fish, and no artificial, processed foods. As Don Colbert’s 2002 diet manual asked, What Would Jesus Eat?

a hearth for others

Feeding the hungry had always been a moral imperative for Christians and a central concern of Christian hospitality, from Benedictine monasteries to Salvation Army soup kitchens. But from the eighteenth century onward, urbanization and industrialization turned the private home into a retreat from the world rather than a place where the hungry stranger was welcomed. Hospitality increasingly became the domain of inns, restaurants, specialized ministries, and Christian residential communities such as L’Abri, L’Arche, and the Open Door Community.

In the 1970s and 80s, however, the overwhelming specter of world hunger hovered over the American dining room. The influential Diet for a Small Planet (1971) blamed the crisis on wealthy Americans and the meat industry, and Ron Sider’s Rich Christians in an Age of Hunger (1977) called evangelicals to a simpler lifestyle. An ecumenical curriculum for young people included this prayer:

Are you the One haunting me with the agony of the mother who has only cornbread or ricewater—or perhaps nothing—to give her child. . . . What do you want me to do about it?

A new wave of cookbooks made it clear that starving children in Africa are not just the concern of politicians, missionaries, and ethicists, but of housewives: you can change the world, they said to Christian cooks, by changing how you make and serve food at home.

Most famous among these was The More-with-Less cookbook, commissioned by the Mennonite Central Committee in 1976 and revised in 2016 “to challenge North Americans to consume less so others could eat enough.” Using simple, economical recipes from around the world, More-with-Less recommends eating organic fruits and vegetables, whole grains, legumes, and nuts; limiting meat and dairy; avoiding processed foods; and growing your own food. In her preface to the 2000 edition, Mary Beth Lind explained the cookbook’s enormous appeal and longevity:

What we eat shows our theology. . . . The book speaks, not only to our physical bodies, but also to our souls. It is soul food, and we need it more than ever. . . .

Lind joined earlier generations in viewing Christian cooking as simple, natural, and healthy, but not just for the sake of one’s own or one’s family’s physical and spiritual health—for the sake of the world. CH

Feasting or fasting? the constant Christian tension in the public square 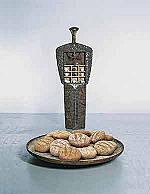 Fasting: from the Orthodox front lines

we should consider the spiritual discipline of not eating

From the beginning of the church, Christians have both feasted and fasted. This timeline highlights some important moments in each of those journeys, especially ones discussed in this issue.