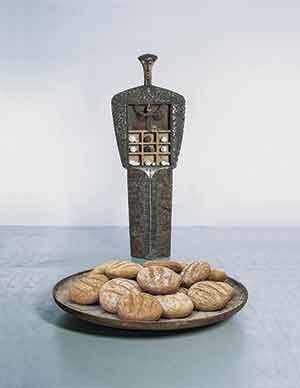 In 2012 Greek sculptor Theodoros Papagiannis held an exhibition in Athens, Greece. It consisted of thousands of small figures made from clay filling two long halls—old and young, couples, parents, and small children all moving in a single direction. On either side of the tables that held the small figures, giant figures of metal and wood stood in silent witness.

As they reached a third hall, there lay huge loaves of bread and sacks of grain. Simply entitled Bread the exhibit kindled a deep awareness of the power of human hunger while also representing the presence of God in that oversized and bountiful provision of bread.

The human journey in Scripture, from Eden to the New Jerusalem, is largely driven by images of food—from the forbidden fruit in the garden to the marriage supper of the Lamb (see “Other Edens,” pp. 7–11).

In the decades following Pentecost, the Christians described in Acts embraced food in community life naturally. Jesus’s model of enjoying meals with all who invited him, Peter’s vision that declared all foods clean, and their own rhythms of feasts and gatherings informed their practice of hospitality. In fact early Christians were suspicious of too much focus on food or abstention, because such a focus could be linked to Judaic practices.

With Clement of Alexandria (c. 150–215), one of the earliest Christian theologians, we begin to see a two-tier approach to spirituality that had long-term repercussions. Influenced by Greek philosophy, Clement drew on concepts of the “good life” that dictated the practice of moderation in all things.

In this light gluttony hindered spiritual health and was not “in keeping with the truth.” Philosophers of the day recommended restricting body weight, but Clement’s definition went beyond excessive eating. He saw too much variety, too much pleasure in eating, bad table manners, and indulgence in specific foods (like appetizers or rich sauces) as gluttonous.

Like other church fathers, Clement drew on medical ideas of his time. Body heat and moistness were tied to different foods and drinks; cool, dry bodies were considered better prepared to devote themselves to prayer and contemplation. Accordingly Clement treated food as something that could contribute to the virtuous life or detract from it, but could not in itself be good or evil. In Paidagogos he wrote, “Other men live that they may eat, just like unreasoning beasts; for them life is only their belly—we eat only to live. . . . Food is permitted us simply because of our stay in this world.”

However Clement also believed in a higher-class, more knowledgeable, and virtuous Christian elite and a simpler, more “ordinary” Christian. For the latter he never advocated fasting, except from sins. For the elite though, food should be used only for sustenance, and eating habits that distracted from spiritual pursuits—including eating for pleasure—must be avoided.

Origen (c. 185–254), Clement’s pupil, made no great fuss over food, stating: “Food and wine are God-given blessings that should be used for the maintenance and health of the body.” His greater emphasis lay on a spiritual calling to fast from vice and wickedness. Origen did, however, stress the dangers of gluttony and pleasure, both of which could easily distract the soul’s pursuit of God.

The church began a new chapter after its fourth-century legalization. Its sustained “otherness” collapsed into an ordinariness, and without martyrs many felt the need for new heroes of the faith and new models of Christian living. As Christian writers like Jerome and Eusebius began to recount how desert fathers and mothers fled the common life for extraordinary lives of asceticism, the model of Christian sanctity became fixated on fasting and self-deprivation.

The prevailing medical ideas in late antiquity about bodily humors (fluids) and qualities (phlegmatic, choleric, sanguine, and melancholic) called for a balance between them as a sign of good health. Such ideas led to an increasing focus on the links between food and sexuality. As the church celebrated the self-denial of celibates, sexual purity was tied to food issues in multiple ways. Too much food, or the wrong kinds of food, could increase heat and moisture, which would lead to sexual arousal.

While this was true of both men and women celibates, the greater focus was given to females, whose bodies were seen as hindrances to male purity. Jerome (347–420) launched a strenuous ascetic campaign, encouraging Christian women to fast to preserve chastity and, quite clearly, to become less sexually appealing to men.

Jerome’s ideal woman “mourned and fasted . . . [was] squalid with dirt, almost blinded by weeping. . . . The psalms were her music, the Gospels her conversation, continence her luxury, her life a fast. No other could give me pleasure but one whom I never saw eating food.” Jerome and his contemporaries tried to create “super saints” who could shame decadent, worldly Christians and inspire the devout.

As monasticism moved into the West and became part of prevailing social structures, it also returned to a more balanced perspective. John Cassian (360–435) had embedded desert monastic practices in his writings. Yet as these practices were implemented by Benedict (c. 480–543) and diffused through the West, they also renewed a focus on bodily care while rejecting excess, undue pleasure, and unnecessary variety. Benedict’s Rule calls for one main meal every day, plus, according to the liturgical season, a light, uncooked evening meal.

Throughout the Middle Ages, Western monasteries grew increasingly established, increasingly prosperous, and increasingly lax. The ideal of a Christian elite was traded for a reality of indulgence and excess. Bernard of Clairvaux (1090–1153) ranted against Cluniac monasteries and their multicourse meals, exotic preparations, varieties of ingredients, and steady diet of meats and sauces. One twelfth-century writer described a monastery serving more than 13 different dishes at a single meal.

Many in the Middle Ages continued to pursue extraordinary self-mortification. Women in particular found in extreme fasting a way to take control of lives otherwise under the complete control of fathers, husbands, or the local priest or bishop. By dedicating themselves to strict self-denial, they hoped to thwart male dominance, achieve spiritual status, and define their own relationships with God. Historians relate fables of women who survived on the Eucharist alone for years, embracing the suffering of hunger as part of the redemptive agony of Christ.

Outside monasteries, however, church life proceeded in a series of feasts and fasts, regulated to enhance the spiritual focus of the seasons. To be a Christian in good standing was to observe the fasts mandated by the church and to celebrate the feast of the Eucharist. Proper dietary practices could be a bigger concern than orthodox theological convictions. One Crusader returned home to the West declaring that he had become a Saracen (Muslim). No one seemed to care much until he ate meat on Fridays; then he was excommunicated.

This focus on devotional practices proved one trigger for the Reformation. Luther, Calvin, and other reformers never disputed the value of fasting for the sake of discipline, but rejected the idea that it merited divine favor and gained special grace. In his Institutes Calvin emphasized an approach to food rooted in “frugality and sobriety.” He urged eating or not eating in ways that contributed to self-discipline and repentance:

For since fasting is in itself a thing indifferent, and should have no importance except for the sake of those ends to which it ought to be directed, a most dangerous superstition is involved in confusing it with works commanded by God.

In the centuries following the Reformation, both Roman Catholics and Protestants relaxed requirements around fasting. Today Ash Wednesday and Good Friday are the only required fast days for Roman Catholics. While not prohibiting fasting, Protestants encourage it only sporadically. That does not mean, however, that there is no recognition of the link between food and spirituality. On the contrary, there are multiple other ways we identify the spiritual nature of this basic human need (see “From Cana to Jell-O,” pp. 42–44).

Food scarcity, so prevalent through most of human history, has now become a nonissue in most of the developed world. The average American Christian can walk through the local grocery store and find aisle after aisle of staples, snacks, produce, and varieties of grains, meats, juices, cheeses, and sweets. Self-denial now falls more in the category of dieting, an American pastime, than of Christian spirituality.

Perhaps we should listen again to some of the early ascetics, not for setting a bar too unreasonably high, but for rekindling the sense that our food choices can support the life of Christ in us. Abba Poemen (c. 340–450) called this the “royal way,” to eat just enough to maintain our health and well-being and to feed the “engine of prayer and contemplation.” Eating and enjoying food is only human, after all, and our Lord came “eating and drinking” (Matt. 11:19), thus sanctifying for us this longing for bread. CH

Fasting: from the Orthodox front lines

we should consider the spiritual discipline of not eating

From the beginning of the church, Christians have both feasted and fasted. This timeline highlights some important moments in each of those journeys, especially ones discussed in this issue.

From the beginning, the holiest Christian meal used everyday food 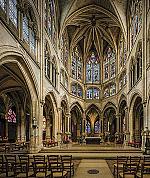