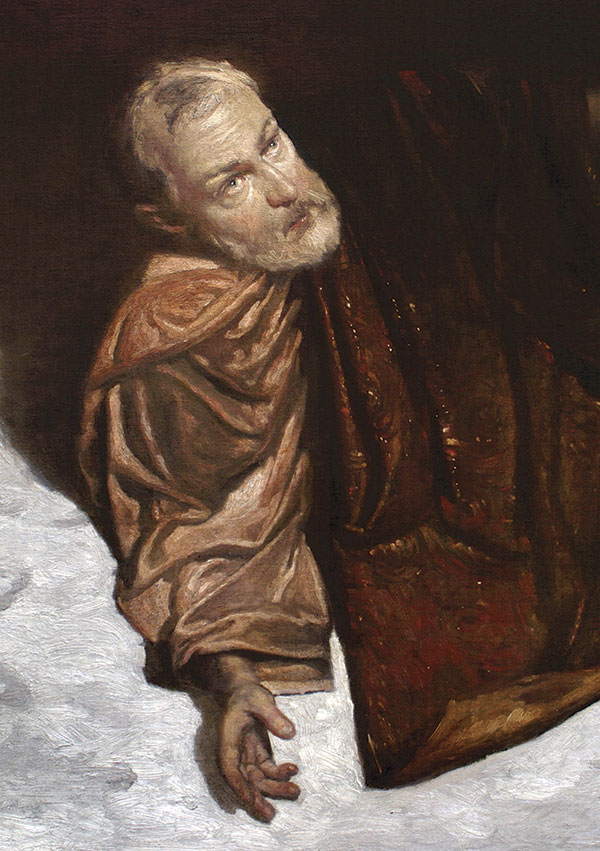 MOST DEPICTIONS OF THE APOSTLE PAUL in art portray him as a solitary figure: Paul at a desk writing an epistle, Paul sitting pensively in a prison cell, Paul holding his famous sword, Paul posing for an iconographer, Paul falling off a horse when he sees the risen Jesus. Many people seem to imagine Paul as an itinerant evangelistic preacher, taking his one-man show from town to town along the Mediterranean coast, making acquaintances along the way but never putting down any roots.

But the New Testament offers a different picture. Instead it shows Paul traveling with Barnabas (Acts 13–15) and with Silas (Acts 15–16)—even getting thrown into jail with Silas. It catalogs his long friendship with Timothy. Stories in Acts mention Paul “and his companions” (Acts 17:1) spreading the gospel—one companion was even the author of Acts; he first appears in Acts 16:10 and is traditionally believed to be Luke. (Assuming it was Luke, he stuck with Paul until the end, as 2 Timothy 4:11 records.)

Jesus had called his disciples his friends and expected them to love one another as friends (John 15:12–15). Paul’s ministry as the apostle to the Gentiles, like his Lord’s, was also not a one-man show or a solo enterprise. It was very much a team effort and depended on many hands working together. Paul’s preaching, debating, teaching, writing, traveling, pastoring, and more were only possible due to the cooperation of key colleagues. His partnerships and friendships with his coworkers in the gospel played a decisive role in his ministry and ultimately helped shape the very idea of friendship in antiquity.

Paul’s notion of loving friendship was something of a revolution in the ancient world. Philosophers of the late Roman republic like Cicero (106–43 BC) and of the early empire like Seneca (d. 65 AD) wrote much about the nature, benefits, ethics, and goodness of friendship (see “A pure and holy love,” p. 18). Yet this friendship was restricted to people of the same sex, the same social class, and the same ethno-tribal group. Friendship with social inferiors was impossible: they could be slaves, retainers, or clients, but not really friends or intimates. For Cicero, friendship, with its mutual assistance and reciprocal obligations, was a practical element of life within the city-state—the Roman equivalent of having someone who can drive you to the airport because you’d do the same for them. For Seneca friendship was merely a useful means for cultivating personal virtue—the Roman equivalent of being part of a self-help group.

But with Paul it was different. It surprises many people to realize that most of Paul’s letters mention coauthors. 1 Corinthians indicates Sosthenes as a coauthor alongside Paul. 2 Corinthians, Philippians, Philemon, and Colossians include Timothy as coauthor. 1 and 2 Thessalonians mention Timothy and Silas. Galatians, 1 and 2 Timothy, and Titus are the only Pauline writings that seem to come from Paul alone.

Instead of envisioning a solitary Paul sitting thoughtfully at a desk, we would do better to imagine the Holy Spirit inspiring him in his tent-making shop as he wrote to the Thessalonians and Corinthians with advice and suggestions from Timothy, Sosthenes, and Silas (1 Cor 1:1; 2 Cor 1:1; 1 Thess 1:1; 2 Thess 1:1). Or we could visualize Paul talking things over with Aristarchus in a prison cell and then whispering through the keyhole of a prison door ideas he wanted Timothy to record for the Colossians (Col 1:1; 4:10).

Or we could envisage Paul in prison being visited by Tychicus, who urged him to write something similar to what had been written for the Colossians but for wider circulation among the churches of southwestern Asia Minor—the letter to the Ephesians (Eph 1:1; 6:21–22). Or imagine Paul in a cell, malnourished and mistreated, scribbling on a piece of papyrus in the evening twilight, taking suggestions from Epaphras, composing instructions for a slave-owner named Philemon concerning his runaway slave Onesimus—then handing the letter to Timothy through a window (Philm 1, 23).

Finally, think of Paul sitting at a triclinium (dining table) in Gaius’s villa in Cenchreae near Corinth, dictating his letter to Tertius, while pausing to ask Timothy, Erastus, Quartus, and Phoebe their opinions (Rom 16:1, 21–23).

Paul’s courier service had to deliver sometimes scathing letters to far-off congregations and make sure the recipients followed instructions correctly. Timothy, Titus, Phoebe, Tychicus, Epaphroditus, Epaphras, and others had the unenviable task of seeing Paul’s wishes implemented, putting out fires, defending their friend from criticism, assuaging concerns arising from his remarks, healing divisions, and consoling those suffering. On a practical level, they also were trying to organize a collection for the Jerusalem church and leading other budding churches through sectarian debates with local Jewish groups and persecution from civil authorities.

Paul often described people with language that clearly highlights their importance to his apostolic mission and conveys his obvious fondness for them: “coworker,” “brother” or “sister,” “beloved friend,” “partner,” “fellow prisoner,” or even “fellow soldier.” These are people whom Paul said strove beside him in the cause of the gospel, who struggled with him to advance the kingdom of God, and whose names were written in the Book of Life.

A good example of Paul’s confidence in their competence can be observed in 1 and 2 Corinthians. Paul commended Timothy as his emissary with high praise: “For this reason I have sent to you Timothy, my son whom I love, who is faithful in the Lord. He will remind you of my way of life in Christ Jesus, which agrees with what I teach everywhere in every church” (1 Cor 4:17). Paul loved him like a son, and he was the ideal conduit to communicate Paul’s own imitation of Christ to the Corinthians in person.

Paul also poured great praise on Titus: “As for Titus, he is my partner and coworker among you” (2 Cor 8:23). After a tumultuous exchange with the Corinthians, Paul said that he was glad to be reunited with Titus in Macedonia, because he “told us about your longing for me, your deep sorrow, your ardent concern for me, so that my joy was greater than ever” (2 Cor 7:7). Titus’s own happiness about how the Corinthians were now doing vindicated Paul’s boasting (2 Cor 7:14). Time and again the invaluable contribution of these friends to his apostolic labors and the deep affection that he had for them rises to the surface.

In Philippians, though, we can find the most lucid account of Paul’s practice of Christian friendship—and the most subversive of Greco-Roman ideas. Many scholars have noted the affinity that Paul’s letter to the Philippians has with the popular genre of friendship letters in antiquity: repeated expressions of affection, the language of people being of one mind and one soul, mutual giving and receiving, common joys and struggles, and the sharing of a moral framework. Paul did not use the actual word “friend” (Greek, philos), though; Philippians is something of a literary hybrid combining ancient ideas about friendship, family, and fellowship.

Even so, Paul was clearly subverting common pagan notions through the deep affection, familial bond, and mutual interests expressed in the letter. Paul’s opening thanksgiving and prayer for the Philippian believers found its basis in “your partnership in the gospel from the first day until now,” and he especially noted, “It is right for me to feel this way about all of you, since I have you in my heart and, whether I am in chains or defending and confirming the gospel, all of you share in God’s grace with me. God can testify how I long for all of you with the affection of Christ Jesus” (Phil 1:5, 7–8).

Paul addressed the Philippians in warm and affectionate tones (Phil 1:12; 2:12; 3:1, 13, 17; 4:1, 8). When he thanked them for their generous provision of material support, he saw this as proof of their concern for him, of their mutual giving and receiving, and he used the metaphor of sacrificial worship (Phil 4:10–20).

Paul also named specific individuals who embodied the love, friendship, affection, and concern between himself and the Philippians—first his dear friend Timothy. “I have no one else like him,” Paul declared, “who will show genuine concern for your welfare. For everyone looks out for their own interests, not those of Jesus Christ. But you know that Timothy has proved himself, because as a son with his father he has served with me in the work of the gospel”

Then, from the Philippian congregation, Paul named their own delegate to his missionary ventures, Epaphroditus, who was ill, but had now recovered: “Welcome him in the Lord with great joy, and honor people like him, because he almost died for the work of Christ. He risked his life to make up for the help you yourselves could not give me”

Some of Paul’s congregations were high maintenance, a cause for constant angst and anxiety. But Paul’s letter to the Philippians demonstrates a bond of love and joy shared between that church and its apostle—characterized by gospel fellowship, familial affection, and spiritual friendship.

Adopted into the family

While Christianity shared many of the characteristics of friendship found in Greco-Roman philosophical and rhetorical schools, Paul’s Christian vision of friendship as love for Jesus and love for one another as brothers and sisters truly revolutionized the notion of friendship in antiquity and beyond.

These radical ideas of sincere love and the adoption of each other as family—what scholars call “fictive kinship”—were shared with others irrespective of sex, ethnicity, class, and status. They surface in several places in Paul’s letters, particularly in his transformation of the word philadelphia from its ancient meaning of love of one’s blood-relatives or tribe to love of anyone who professes faith in Jesus as Lord. Paul wrote to a potentially fractious cluster of house churches in Rome: “In brotherly and sisterly love, let your devoted and deep affection for one another be known and pursue the honor of others over yourself” (Rom 12:10, author’s translation).

We can easily gloss over such words as mundane today, but they were by no means self-evident in the ancient world. Paul was telling Christians to have a family level of love for people who were not part of their biological family and to seek the honor of others in a social context characterized by fierce rivalry and competition for one’s own honor. This was a completely countercultural view of friendship.

Paul also commended the Thessalonians for their exercise of philadelphia. He wrote: “As for brotherly and sisterly love, there is no need to write to you about that topic, since you have yourselves learned from God how to love one another, and in fact this is how you treat all the brothers and sisters spread throughout the whole of region of Macedonia” (1 Thess 4:9–10, author’s translation).

Paul’s new articulation of the virtue of philadelphia gave to the burgeoning Christian movement the importance of friendship as love for everyone who loves Jesus irrespective of sex, ethnicity, or social status. If Paul’s gospel was, most simply, “What a friend we have in Jesus,” then his ethic included the moral imperative, “Any friend of Jesus is a friend of mine!” C H

Michael F. Bird is academic dean and lecturer in theology at Ridley College, Melbourne, Australia. He is the author of Evangelical Theology, The Gospel of the Lord: How the Early Church Wrote the Story of Jesus, and coauthor with N. T. Wright of The New Testament in Its World.

Friendship between Christians always has an added dimension 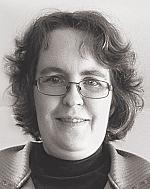 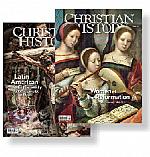