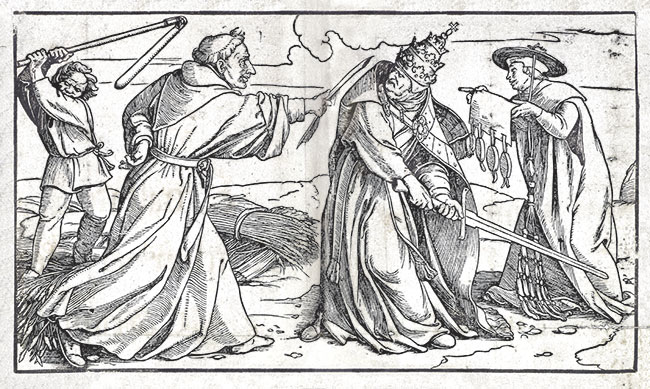 Imagine a world with no nonprofits. It is a world where the church provides generous aid, the government is justly administered, and families are healthy and thriving and supporting their members, but no other organization exists in which Christians—or anyone, actually—give aid to others, or organize to defeat injustices, or advance wise causes.

You may not realize it, but you may have Martin Luther (1483–1536) to thank for the fact that we do not actually live in that world. While medieval society did not lack for charitable and cultural organizations, Luther’s insistence that all Christians are called to the vocation of serving each other sparked a new emphasis on voluntary association for the purpose of doing good.

While not without its own complexities, the medieval world was, compared to ours, far more regimented, structured, and straightforward. Whether someone was a serf, a lord, a priest, or a king, the responsibilities of a person’s station were well defined. Everyone had particular duties to fulfill, whether that was harvesting crops, administering sacraments, or marching to battle when the feudal lord demanded it. And each of these responsibilities was considered part of a sacred, covenantal order under God.

Both sacred and secular powers, church and state, dominated the social life and vision of the Middle Ages. Popes, clergy, and monastics represented the spiritual power, while royalty, nobility, and peasants dealt with material and temporal realities.

The church’s canon law overlapped and competed with jurisdictions and systems of civil law. In this sense the structures of the medieval period were far from simple or peaceful. Church and state fought a constant battle for supremacy over one another, while simultaneously struggling together to protect Christendom from both spiritual malaise and external dangers.

Innovative structures did arise to address social needs. Cathedral schools and universities represented a major development in the ability of medieval society to educate a class of people needed for administration of secular government as well as to serve as clergy (for more on that, see CH #139). Monasteries provided another important venue for pursuing righteousness while living in a fallen world (see pp. 12–15).

By the late Middle Ages, the church had sanctioned large financial establishments called montes pietatis, or “mountains of piety,” aimed at providing for the needs of the poor; they were forerunners of modern charitable foundations (and also, because people sometimes pledged physical objects as collateral for loans, of pawnshops). These institutions continued operation beyond the Reformation. In early eighteenth-century London, the “mount of piety” was known as “The Charitable Corporation, for the Relief of Industrious Poor, by Assisting them with Small Sums upon Pledges of Legal Interest.”

Luther took up these medieval models and offered his own understanding of the Christian calling to faithfulness before God in the world. In so doing he provided an innovative update to Christian social teaching. Luther’s social ethic is most commonly understood in his presentation of the “three estates”: family, church, and government. For Luther these three social institutions formed the core of Christian society, and he continually referred to them. For instance Luther noted in his “Lectures on Genesis” that each estate has a necessary role to play in the flourishing and function of human society:

We know that there are three estates in this life: the household, the state, and the church. If all men want to neglect these and pursue their own interests and self-chosen ways, who will be a shepherd of souls? Who will baptize, absolve, and console those who are burdened with sins? Who will administer the government or protect the common fabric of human society? Who will educate the young or till the ground?

Unlike many spiritual authorities of his time, Luther recognized that good citizenship began in marriage and parenthood. Without marriages producing children, the human family would cease to exist within a single generation—making the family the first necessary estate of human society. In his treatise “The Estate of Marriage” (1522), Luther defended marriage against the understanding that it somehow represented a lesser way of following Christ than monastic vows of celibacy:

The ones who recognize the estate of marriage are those who firmly believe that God himself instituted it, brought husband and wife together, and ordained that they should beget children and care for them.

Citing Genesis 1:28 Luther assured his audience, “The estate of marriage and everything that goes with it in the way of conduct, works, and suffering is pleasing to God.” Though this may sound like common sense in our own day, the idea that marriage is as holy as celibacy was one of the shocking implications of Luther’s thought at the time.

Three years after writing this ardent defense of the estate of marriage, Luther himself married a former nun, Katherine von Bora (1499–1552). He undertook this in part because of what he had previously said about the godliness of marriage. He wrote to his friend Nicholas von Amsdorf (1483–1565) that he “wanted to confirm what I have taught by practicing it; for I find so many timid people [resisting] such great light from the gospel. God has willed and brought about this step.”

Luther’s greatest reform efforts, though, focused on the church, which he understood to be an estate provided by God for the spiritual good of his people. “All who are engaged in the clerical office or ministry of the Word,” Luther wrote in his Great Confession Concerning Christ’s Supper (1528), “are in a holy, proper, good and God-pleasing order and estate.” Many of Luther’s writings focused on defining and clarifying precisely what the order of the church required—and, with the medieval imperial papacy in mind, what it did not.

Here is where the role of the third estate, government, came in. Where the church focused on spiritual good, the civil government was called to defend and promote temporal justice. Luther wrote in Temporal Authority: To What Extent it Should Be Obeyed (1523): “It is certain and clear enough that it is God’s will that the temporal sword and law be used for the punishment of the wicked and the protection of the upright” (see p. 25). Part of his complaint against the medieval papacy was the degree to which it had assumed temporal as well as spiritual power.

Not only did Luther believe that these three estates usefully organize society, but he taught that the Word of God explicitly ordains and mandates them. He noted in the Great Confession:

These three religious institutions or orders are found in God’s Word and commandment; and whatever is contained in God’s Word must be holy, for God’s Word is holy and sanctifies everything connected with it and involved in it.

For Luther these three estates formed the foundations for faithful Christian engagement in the world—the normal ways in which we show love to neighbor. Luther argued that we see faithful Christian service at work in the family—the sacrifice of father and mother and the love of children for their siblings as well as their parents. We see it at work in the church, through the proclamation of the gospel and the administration of the sacraments. And we see Christian service in the work of the civil government, which protects and preserves earthly justice.

The common order of Christian love

But even as he advocated for a thoroughgoing reform of all three estates, particularly the church, Luther also connected them to the broader Christian calling to love of neighbor, which he called “the common order of Christian love.”

The three estates provide the contexts within which Christian love normally becomes manifest—that is, we most often practice Christian love through family, church, and government—but the common order of Christian love is not limited to or exhausted by them. We do not serve others only through our families, our churches, and our governments.

Rather, as Luther puts it in the Great Confession, this common order is that within which

one . . . serves every needy person in general with all kinds of benevolent deeds, such as feeding the hungry, giving drink to the thirsty, forgiving enemies, praying for all men on earth, suffering all kinds of evil on earth, etc.

Luther empowered ordinary people to participate in Christian civic engagement in much the same way he empowered them to read and understand the Scriptures—God’s word and God’s ways are for peasant, priest, and noble alike. In this sense Luther’s understanding of the common order of Christian love is another way of talking about his conception of vocation, the common calling of all Christians to faithfully—and daily—follow Christ.

Luther exhorted his hearers and readers to be sensitive to the particularity of the Christian calling: “Everyone should examine his gift.” Everyone has some gift to offer others, and one person’s gift is not necessarily like another’s. Each person has something unique to contribute to the good of all. In the context of civil society, we see people banding together in more and less formal ways, for longer and shorter periods of time, to accomplish and realize some common good.

Luther’s understanding of the common order of Christian love ultimately came to expression not only in mundane and occasional individual acts of love, but also in enduring social institutions of civil society that expressed this common Christian calling to do good to all people—in Luther’s words, to be “a perfectly dutiful servant of all, subject to all.” In a seemingly infinite variety of charitable organizations past and present, we can see diverse expressions of Christian love take concrete form (see pp. 46–47).

For the love of God

Later thinkers would build upon and develop Luther’s thought. Nineteenth-century Dutch Reformed theologian and statesman Abraham Kuyper included civil society along with the family, church, and government as one of the key institutions of social life (see pp. 28–32). Twentieth-century German Lutheran theologian Dietrich Bonhoeffer added “culture” to the other three estates as one of the four divine mandates for our lives that are “grounded in the revelation of Christ and the testimony of Scripture” (see pp. 42–44).

In the nineteenth century, French social theorist Alexis de Tocqueville (1805–1859) saw evidence of Luther’s legacy in the United States in particular. He observed in Democracy in America (1835, 1840), based on his travels in the United States, that

Americans of all ages, all stations in life, and all types of disposition are forever forming associations . . . religious, moral, serious, futile, very general and very limited, immensely large and very minute.

De Tocqueville noted that many of these organizations had a religious basis: “Christianity does, it is true, teach that we must prefer others to ourselves to gain heaven. But Christianity also teaches that we must do good to our fellows for love of God.”

Today over 1.6 million registered nonprofits operate in the United States: churches and charities, fraternal orders and food banks. Whether they explicitly trace their heritage back to Luther or not, Luther’s emphasis on the common order of Christian love remains for many people the ground of their creative service of neighbor. CH

Jordan J. Ballor is director of research at the Center for Religion, Culture & Democracy (CRCD).