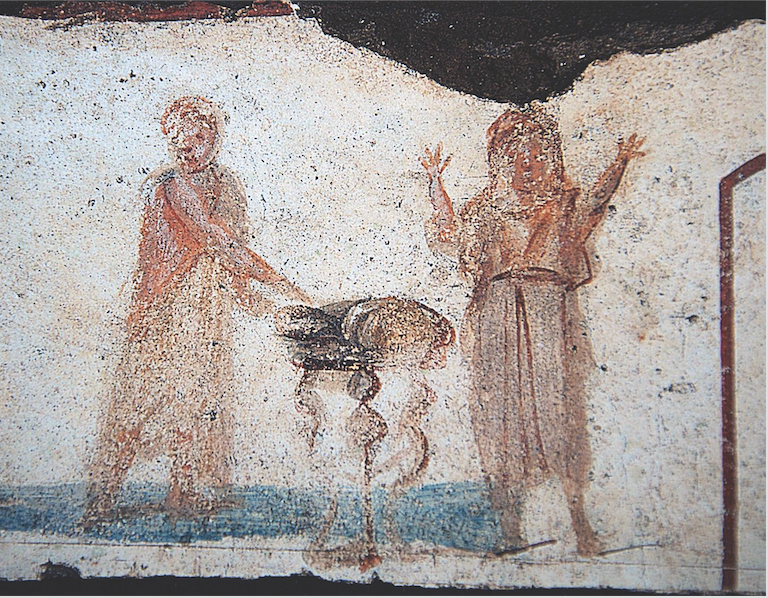 — c. 96 The First Letter of Clement urges Christians to pray for and serve others.

— 380 Christianity becomes the official religion of the Roman Empire. Around this time Basil of Caesarea founds the Basiliad, a precursor to modern hospitals.

— 516 Benedict writes his Rule and begins to establish the Benedictine order, where monks and nuns live in community rather than as hermits.

— 532 Justinian begins the construction of Hagia Sophia, which will be consecrated in 537.

— 590 Gregory the Great becomes pope; some time after this, he writes the Dialogues including the “Life of St. Benedict.”

— 797 Empress Irene begins her troubled reign as sole ruler of the Byzantine Empire.

— 989 The Peace of God Movement —an effort to reduce violence among feuding nobles—is proclaimed.

— 1019 Svjatopolk of Kiev kills his half-brothers, Boris and Gleb, who refuse to commit violence against him; they become celebrated as Orthodox martyrs.

— 1027 The Truce of God Movement is proclaimed.

— 1098 The Cistercians are founded; like the Benedictines, they will become politically powerful.

— c. 1200 The first confraternities are founded; they feature laypeople gathering to promote works of piety and mercy as well as art and culture.

— 1216 The Dominicans are founded and soon become leaders in education.

— 1462 The first mons pietatis (an institution that lent money to the poor at reasonable interest) opens in Italy.

— 1523 Luther publishes Temporal Authority: To What Extent It Ought to Be Obeyed.

— 1525 Luther publishes Against the Murderous, Thieving Hordes of Peasants.

— 1633 The Daughters of Charity are founded.

— 1826 The American Temperance Society is founded.

— 1833 The American Anti-Slavery Society is founded.

— 1879 Katharine Bushnell goes to India as a doctor.

— 1894 The short-lived Modern Church is founded as a church for working people.

— 1902 Herman Bavinck succeeds Kuyper as professor of theology at the Free University.

— 1909 After the death of her husband Sergei, Elizabeth Feodorovna opens a convent that serves the poor. She is later canonized as an Orthodox royal saint.

— 1932 Maria Skobtsova takes monastic vows on the condition that she can continue to live in and serve the world. She becomes a rescuer of Jews from the Nazis.

— 1933 The “church struggle” over Nazism begins in Germany.

— 1934 Leaders of the Confessing Church release the Barmen Declaration.

— 1937 Bonhoeffer publishes The Cost of Discipleship.

— 1939 Bonhoeffer becomes involved in the plot to kill Hitler.

— 1943 Archbishop Damaskinos of Athens denounces the deportation of Jews from Greece.

— 1948 The apartheid era begins in South Africa, prompting significant resistance among Christians and others.

— 1979 Schaeffer and his son Franky release Whatever Happened to the Human Race?

— 1994 The election of Nelson Mandela as president of South Africa officially ends apartheid.