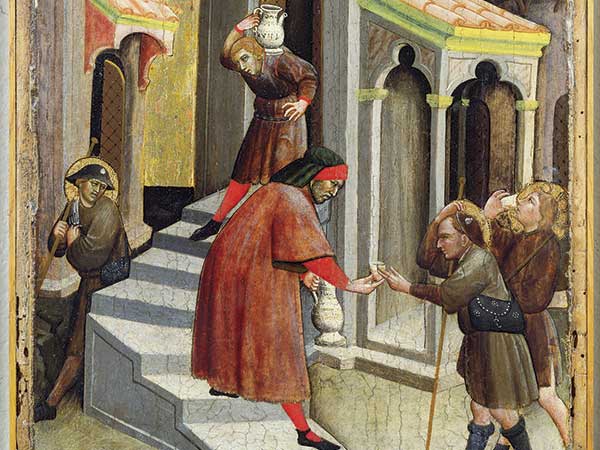 Margery Kempe was anything but typical. She became known for visions, vigorous weeping, and unusual practices such as vegetarianism and wearing pure white clothing. Some thought she was demon-possessed, epileptic, or a heretic. Others defended her visions and tears as genuine gifts from God. Her extreme devotion still helps us glimpse everyday faith in the late Middle Ages.

Kempe (c. 1373–c. 1438) was one of those people. Born in Norfolk, England, to a respected merchant and public official, she married merchant John Kempe and had 14 children. In her younger years, she went frequently to her parish church, heard sermons, confessed often, weekly sought the Eucharist, fasted, wore a hair shirt for a time, said her rosary, and gave alms. But she still wanted something more.

In her twenties she began having visions in which she talked on a friendly basis with Jesus, Mary, and some saints. She claimed Christ told her that her religious practices were good, but they were for “beginners” and she should go deeper. Thus began her remarkable religious quest. At about age 60, the illiterate Kempe dictated her memories to scribes who put together the first autobiography ever written in English, the Book of Margery Kempe, from which we know her story.

Between the 500s and 900s in Western Europe, the Old Testament had loomed large in religious consciousness. It inspired early medieval clergy to use incense in worship, anoint people with oil, encourage tithing, and observe the Sabbath strictly.

After Viking invasions ended in the eleventh century, Western Europe gradually became settled, urbanized, literate, populous, and prosperous. Under these conditions Europe “discovered” the Gospels, fostering an emotional spirituality. Everyone yearned to learn more about Jesus, his mother, and his apostles. Coupled with wider literacy, this encouraged the use of personal prayer books: lavish “books of hours” for the rich and plainer books for the less wealthy. Vernacular translations flourished—not only of the Gospels but also the Psalms, devotional tracts, and sermons of early church fathers.

Kempe gained religious knowledge from confessors, preachers, and those who read to her. In her autobiography, she says (referring to herself in the third person) of one priest, “He read to her many a good book of high contemplation and other books, such as the Bible with . . . commentaries on it.” On one occasion Kempe chastised an archbishop about his swearing. She noted,

In a most meek and kindly way, he allowed her to say what was on her mind and gave her a handsome answer. And so their conversation continued until stars appeared in the sky.

The late Middle Ages witnessed an increased interest in preaching that spoke to people personally. Good preachers became celebrities. Kempe’s main source of gospel knowledge came from preaching; she loved sermons. Preachers generally tolerated her loud sobbing, but on one occasion, her outbursts annoyed a renowned Franciscan preacher, who barred her from his sermons.

She expressed her great sorrow, “for she was excluded from the sermon, which was to her the highest comfort on earth when she could hear it, and equally the greatest pain on earth, when she could not hear it.”

Medieval theologians generally taught that Jesus’s hard sayings were advice or “evangelical counsels,” not commands applicable to everyone. For centuries only monks and nuns had embraced these sayings—abandoning wealth, sex, family, vengeance, pride, and ambition. But as revival spread, some laypeople, including Kempe, felt called to observe the hard sayings as best they could. At one point Kempe and her husband took vows of chastity.

In the early 1200s, Francis of Assisi (1182–1226) and Dominic of Caleruega (1170–1221) had created a radically new form of monastic life attempting to imitate the life of Jesus and his apostles. In response to Luke 9:36, they wandered about in poverty—preaching in a lively, emotional fashion in town squares, fields, and churches. Unlike cloistered monks these friars lived and worked in the world as theologians, businessmen, and missionaries. They were also popular confessors, sought out especially by growing numbers of devout women like Kempe for the advice they could give.

In early Christianity the central religious festival was Easter, celebrating the risen Christ. But medieval devotion emphasized the suffering Christ of Good Friday: scourged with whips, crowned with thorns, pierced with nails. These acts were represented in art, mulled over in prayer, and even imitated in life. Crucifixes became increasingly realistic, even grotesque. To medieval Christians they were inspirational.

People also gained a new appreciation for Christ­mas; Francis of Assisi created what may have been the first Christmas creche in 1223 to show Christ’s humanity as a real baby. Likewise Mary grew in prominence in art and devotion; a real baby needed a real mother. Kempe meditated on Christ’s birth so long and intensely that she imaginatively entered biblical scenes. In one vision she was Mary’s maid, caring like a medieval servant girl: bringing food, doing chores, and changing diapers.

Religious pilgrimages were also astonishingly popular during this era. Many medieval Christians wanted to see with their own eyes the holy places and holy people that figured so prominently in their religion. Most adults probably went on pilgrimage, if only a day trip to a regional saint’s shrine.

The tireless pilgrim Kempe began in a modest way by visiting (with her husband) local shrines in England. But in one astounding burst of energy, she visited Assisi, Rome, Jerusalem, and Compostela (in Spain) over the course of three years. She then went to shrines in Norway, Prussia, and Charlemagne’s old capital, Aachen.

At the parish church in front of relatives, friends, and neighbors, pilgrims were invested with a distinctive outfit consisting of a broad-brimmed hat, a sort of knapsack, and a walking staff. On their pilgrimages they paid debts, forgave enemies, and asked pardon of those they had offended. Before Kempe entered Jerusalem, she asked forgiveness of her fellow pilgrims, with whom she had much friction due to her religious talk.

When Kempe was in Jerusalem, the Franciscan guides described how Christ had suffered in various places. At the Mount of Calvary, “she fell down . . . and cried with a loud voice as though her heart would have burst apart, for in the city of her soul, she saw truly and freshly how our Lord was crucified.”

Between the eleventh and fifteenth centuries, hundreds of thousands made such pilgrimages to the Holy Land. Pilgrimages were considered penitential, requiring a sacrifice of time, money, and even health. Many pilgrims died of disease or shipwreck or at the hands of robbers; some were enslaved. But to the medieval pilgrim, the risks were worth the reward.

Medieval pilgrimage was also rooted in the veneration of saints and their relics (relicta, “things left behind”). Medieval Christians believed the barrier between this life and the next is porous: saints were not dead any more than Jesus was, and people could ask saints, God’s friends, to intercede for them from any locale.

But many thought that at shrines saints were present in a special way. The bodily remains or personal effects of saints were taken from their graves in solemn ceremony and placed in receptacles called reliquaries, often magnificent works of art. Many medieval Christians found it deeply satisfying to kneel, touch the saint’s remains, and ask the saint to intercede with God.

Concern for the dead and the developing doctrine of purgatory deeply influenced late medieval religion. Medieval Christians believed they could help deceased parents, spouses, or children. They asked God to be merciful and to shorten their time of purgation.

Masses for the dead also featured centrally in popular faith. People of middling wealth might arrange for a Mass on the day of their death, for 30 days thereafter, and on the first anniversary of their death. The rich created perpetual endowments, called chantries, in which a priest was to say Mass daily for them, their kinsfolk, and if they were generous, for all Christians in purgatory, until the end of time.

In the 1100s and 1200s, some heretical groups called Cathars, or Albigensians, taught that all material things are essentially evil and attacked the belief that Jesus can really be present in the bread and wine of the sacrament. In reaction the church defended Jesus’s presence in the elements through the doctrine of transubstantiation: while bread and wine appear unchanged to the senses, they taught, the priest’s consecration in fact makes them Jesus’s real body and real blood. By partaking of the bread (laypeople didn’t receive the cup), people felt they could be physically united with him. The awesomeness of this discouraged casual participation, so receiving the Eucharist was rare.

The church demanded people receive at least once a year during Easter—but only after confession, penance, sexual abstinence, and fasting had prepared them to receive worthily. Kempe secured permission from the archbishop of Canterbury to receive the bread every Sunday, an unusual practice for a layperson and one for which she was criticized.

Most Christians were content merely to observe the consecrated host. Some laypeople, in fact, called out for the priest to raise the host so they could see it, a practice eventually incorporated into the official Mass. Nonetheless some found it difficult to believe the church’s teaching that what looked and tasted like ordinary food is really the body of Christ. To refute heretics and console doubters, the church sanctioned the festival of Corpus Christi (the body of Christ).

It began in church with a special Mass in front of the kneeling faithful; then clergy, town officials, members of guilds and confraternities, and others followed the consecrated host, displayed in a magnificent vessel, into the streets. They moved through throngs of people who decorated their houses with tapestries, flowers, and branches. Sometimes public plays enacted the account of salvation from Creation to the Last Judgment.

While most medieval believers did not take their faith as far as did Kempe, her life reveals the central threads of late-medieval Catholicism—a rediscovery of the Gospels; an identification with Jesus, Mary, the apostles, and the saints; and a desire to see, touch, and emotionally experience the truths of the Christian faith. As is recorded in the Book of Margery Kempe,

On a night, as this creature lay in her bed with her husband, she heard a sound of melody so sweet and delectable . . . as if she had been in paradise. And therewith she started out of her bed and said, “Alas, that ever I did sin, it is full merry in heaven.”

Joseph Lynch (1943–2008) was professor of medieval history at The Ohio State University and the author of five books including The Medieval Church: A Brief History. This article is excerpted from a longer one that appeared in CH #49, Everyday Faith in the Middle Ages.