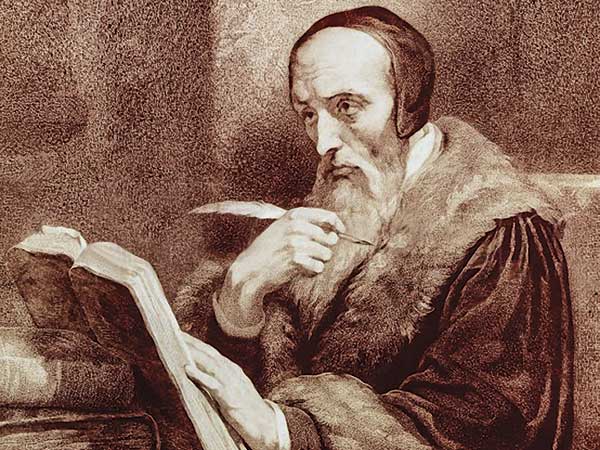 [John Calvin was influenced by Bernard of Clairvaux]

Bernard penned famous hymns: “O sacred head, now wounded,” “Jesus, thou joy of loving hearts,” and “Jesus, the very thought of thee.” Dante (1265–1321) had Bernard lead him into the last level of heaven. Tauler quoted Bernard often. Martin Luther (1483–1546) called Bernard “superior to all the doctors [of the church] in his sermons, even to Augustine himself, because he preaches Christ most excellently.” John Calvin (1509–1564) called him the major witness to truth between Pope Gregory the Great (d. 604) and the sixteenth century. Johann Arndt (1555–1621), author of True Christianity and a major influence on Pietism, counted Bernard among his influences; so did Lewis.

Some scholars think Dante based his descriptions of hell on Mechthild’s works and that Matelda in Purgatorio is a tribute to her. The Friends of God translated Mechthild into their German dialect.

Margery Kempe (c. 1373–c. 1438) claimed Jesus said in one of her visions, “For I tell thee forsooth right as I spoke to Saint Bridget, right so I speak to thee, daughter, and I tell thee truly it is true every word that is written in Bridget’s book.”

Friends of God and Theologia Germanica

Luther published a copy of the Theologia, stating “next to the Bible and St. Augustine, no other book has come to my attention from which I have learned—and desired to learn—more concerning God, Christ, man, and what all things are.”

Luther is known to have read Tauler’s sermons and appreciated their emphasis on salvation by grace. Arndt also referenced Tauler. Catherine Winkworth (1827–1878), to whom we owe English translations of many German hymns, translated Tauler’s sermons.

Lewis quoted Julian more than he did any other medieval mystic. Thomas Merton (1915–1968) called her “the greatest of the English mystics.”

Thomas à Kempis wrote a biography of his predecessor Geert de Groote (1340–1384). Around 10 hymns still used are attributed to à Kempis, including “O love, how deep, how broad, how high” and “Light’s abode, celestial Salem.” Erasmus (1466–1536) and Luther received some education from the Brethren of the Common Life. During the Reformation a house of the Brethren in Hereford, Germany, became a Lutheran religious community. Ignatius of Loyola (1491–1556), founder of the Jesuits, reread à Kempis’s The Imitation of Christ constantly. Arndt referred to him as well. John Newton’s (1725–1807) conversion was due in part to reading Imitation. Lewis referenced the book. Dietrich Bonhoeffer (1906–1945) read Imitation the night before

John Wesley (1703–1791) published The Practice of the Presence of God in his Christian Library, a series containing “extracts from and abridgments of the choicest pieces of practical divinity.”

Doctor in the house?

Bernard of Clairvaux was named a Doctor of the Church by the Roman Catholic Church in 1830, Catherine of Siena in 1970, and Hildegard of Bingen in 2012. CH

We know her only as “Lady Julian of Norwich.”