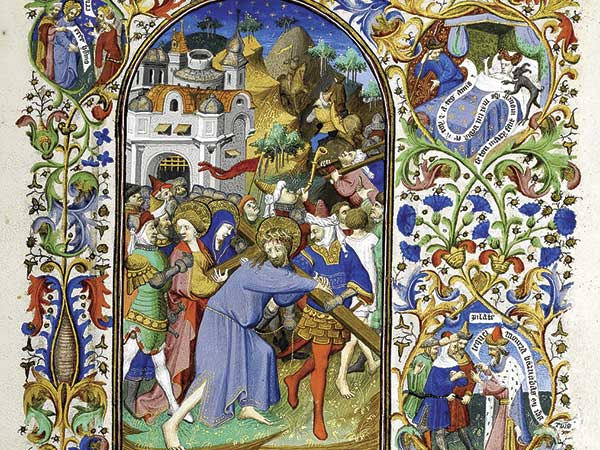 [Jesus carries his cross in this English fifteenth-century book of hours.]

Mysticism has been called “the science of the love of God,” and “the life which aims at union with God.” Mystics are found in nearly every world religion; their tendency to map out new experiences of the divine often leads people to view them with suspicion and relegate them to the sidelines. But during some historical periods, mysticism seems more prevalent and more authoritative, and mystics are more needed by their communities.

One such period was the High Middle Ages in Europe (1100–1450), a time of great social change as the feudal system gave way to the beginnings of capitalism, cities, and a new middle class.

We think of the Middle Ages as an age of faith, and so it was, but it was also an age of crisis. In such a context, mysticism was not a retreat from the negative aspects of reality, but instead a creative marshaling of energy to transform reality.

Medieval mysticism was often visual and affective; the mystic saw and felt truth, saw visions of God or Christ or the saints, and was flooded with love for what he or she saw. So powerful was this love that she or he felt compelled to share it with others.

Women outnumbered men in medieval mysticism, unlike in other periods of mystical revival. No one knows why, but we can speculate on some of the factors involved.

Medieval men with religious vocations and leadership ability had a number of choices—they could be active or contemplative in their roles as priests, friars, monks, or hermits. Women who felt called to a religious life had one main option, a contemplative one: to join a convent or a community of pious lay women. Medieval society believed women must be protected from violence and from expressing their own sexuality. Furthermore women were thought to be “naturally” passive, meditative, and receptive.

Some aspects of convent life probably encouraged women to develop both mystical and leadership abilities. Before the fourteenth century, women in religious communities were generally the only ones who learned to read and write, had access to libraries, and associated with other scholars. It was also the only place a woman had any privacy.

The vow of celibacy exempted women from pregnancy and childbirth, and thus granted them much longer lives than those of their married counterparts. Convents also provided opportunities for leadership and teaching, whether in bookkeeping, tending the sick, or instructing children.

Medieval women mystics came from different classes, lived in different parts of Europe, and experienced spiritual awakenings at different ages. Many did not become great teachers until they reached middle age. As children many were marked by precocious piety, and their rebellion often took the form of asceticism.

From adolescence through their thirties, they often lived withdrawn or secluded lives; those who were married were absorbed in family responsibilities and childbearing. When children grew up, or when these women had reached a position of more prominence in religious communities, they finally had the freedom to be visible, active leaders and effectively offer spiritual advice to others.

Today we can still hear and heed the emphasis of both male and female medieval mystics on the spiritual life as a progressive climb—sometimes a steep and arduous one. In the writings of these men and women, God always teaches through love and always stresses the self-worth of humans in Christ.

Elizabeth Alvilda Petroff, professor of comparative literature at the University of Massachusetts, Amherst, and author of Medieval Women’s Visionary Literature. This is excerpted from a longer article in CH issue #30.

Much medieval mysticism had an unlikely source: the writings of an anonymous monk.

Margery Kempe’s story gives us a window into the daily lives of many devout medieval people.