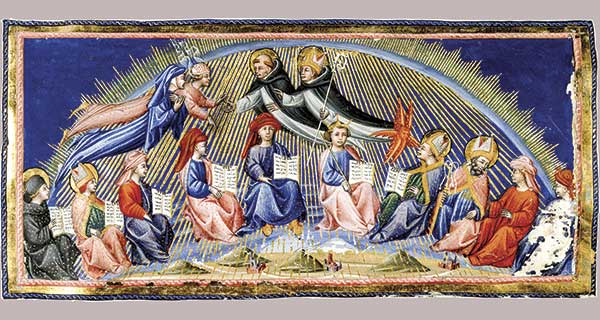 [Dante and Beatrice meet Aquinas and others in heaven, including Dionysius, one of the ten wise men seated in a semicircle beneath the flying figures.]

Open the average set of medieval mystical treatises, and you’ll start seeing certain themes appear and reappear, like variations on a musical motif. The world is a hierarchy, these writers tell us: a sacred order in which each level of creation receives the divine glory and pours it out to the level below, like a cascading fountain. The world thus reflects God in its beauty and order­—but at the same time, God ultimately surpasses any description we make of him. And how do we reach God? Step by step we cultivate virtue, contemplate God’s goodness, and ultimately are unified with him in adoration and love.

These ideas formed the minds and hearts of most educated medieval thinkers for hundreds of years. And they came primarily from one man.

About the year 500, an anonymous Syrian monk set pen to vellum under the name “Dionysius the Areopagite.” Did he dwell in a mountaintop monastery, or one overlooking the green coastland, or one along the banks of the Euphrates? These details are lost, but his books remain: Divine Names, Celestial Hierarchy, Ecclesiastical Hierarchy, and Mystical Theology.

Our mystery monk adopted his pseudonym from Acts 17, which tells of the apostle Paul in Athens, preaching on the Areopagus (a rocky outcropping) to the council meeting there. Paul used the threefold Platonic outline of the world that his pagan hearers would have known well: all things come from the One (17:24), are sustained by that One (17:25), and will return to the One (17:31). On that day a member of the council named Dionysius became a believer (17:34).

Until the Renaissance the writings of the new Syrian “Dionysius” were accepted as authentic works of the Acts 17 Dionysius. Eventually scholars realized that these writings show influences much later than those of Paul’s day. The second Dionysius (“Psuedo-Dionysius,” as he is often called) had drunk deeply of the intellectual framework known as Neo-Platonism and its understanding of the universe, which had a huge impact on other early Christian authors, such as Augustine (354–430).

Dionysius took the idea of the world as sacred order from his reading. He coined the new word “hierarchy” to describe it, and he came up with the nine “choirs” of angels, putting together scattered biblical references into an ordered list: seraphim, cherubim, thrones, dominions, virtues, powers, principalities, archangels, and garden-variety angels.

For him the “ecclesiastical hierarchy”—the ordered ranks of the clergy—also reflected this heavenly hierarchy, as did the biological realm, from humans down to inanimate things. None of these various hierarchies was about power. Higher levels did not dominate the lower ones by force, but showed the heavenly glory to them in a way that enabled them to achieve their own unique perfection.

Beyond this ordered hierarchy of created glory, one found the infinite beauty and goodness of God—the “One,” in terminology Dionysius borrowed from Platonism. Like earlier Christian Platonist Gregory of Nyssa (335–394), he saw God as infinite—the fundamental difference between God and all creatures, however glorious those creatures might be. Dionysius believed God reveals himself through his Word and creation, but he also thought that we cannot comprehend God beyond his given revelation. No created being can fully understand God or adequately represent God.

This understanding of God as fundamentally beyond the reach of human language and concepts became central to both Eastern and Western theological traditions. In the West the concept of the “Great Chain of Being,” integral to medieval thought and heavily influenced by Aristotle, fit Dionysius’s system well. Dionysius’s concept of hierarchy supported the social order of medieval Europe while also pointing to God’s utter transcendence of all such hierarchy. This vision focused on the sharing of glory rather than on the exertion of power.

Medieval Europeans believed that all things flow forth from God through the Logos in an orderly hierarchy and that in the end, God will draw all things back to himself through Christ. But even in this life, they thought, we can mystically experience that ascent, especially through contemplation and the liturgy of the church.

While we may not fully understand God, we still talk about him. Dionysius called the two ways we do so kataphatic (asserting) and apophatic (denying). Kataphatic language looks at the created world and affirms that everything good found there reflects the infinite goodness of God. Though this language is true, it is hopelessly inadequate because all created things are infinitely more unlike God than they are like God.

Nor has [the Divine nature] imagination, opinion, reason or understanding; nor can it be expressed or conceived . . . nor is it science nor truth, nor kingship nor wisdom . . . nor is it spirit according to our understanding, nor [sonship], nor paternity . . . neither can the reason attain to it, nor name it, nor know it; neither is it darkness nor light, nor the false nor the true. . . .

Ninth-century theologian John Scotus Eriugena (815–877) translated Dionysius’s work from Greek into Latin and constructed an elaborate account of the relationship between God and creation based on Dionysian ideas. The Council of Paris in 1225 condemned the view, taught by Eriugena, that no one ever, even in heaven, sees God “as he is.” But medieval scholastic theologians frequently treated Dionysius as an authority on the unknowability of God and the ultimate inadequacy of all human language—whether the institutional church liked it or not.

Thomas Aquinas (1225–1274) cited Dionysius more often than he cited any other author except for Aristotle. Aquinas argued that we will, in heaven, see God, but will not fully understand him. On earth our language can only single out aspects of God’s being (“goodness” or “justice” or “love”), which are actually one indivisible, infinite reality. When Aquinas, late in life, experienced a vision of God that caused him to say everything he had written was “like straw,” he was not renouncing his earlier teachings; it had always been part of his theology that his theology, and all theology, was hopelessly inadequate.

This Dionysian theme of human inability to grasp and describe the infinite reality of God shows up in a number of later medieval writers. The “Rhineland mystics” of the fourteenth century (see “A spiritual awakening for the laity,” pp. 6–12) show a particularly strong Dionysian element. Meister Eckhart, Johannes Tauler, and Henry Suso all taught that the ultimate divine reality is an “abyss” or “nothingness” to which no human concepts apply—the “desert of the Godhead.”

a cloud of forgetting

An anonymous translator rendered Dionysius’s Mystical Theology into English in the fourteenth century and probably also wrote the treatise The Cloud of Unknowing, which develops Dionysius’s ideas into spiritual disciplines for contemplatives.

Because of God’s infinite transcendence, a “cloud of unknowing” separates all creatures from him. To seek to know God, one must eventually deny all images or mental concepts or pious feelings associated with God. Even though these things are good in themselves, they cannot give true knowledge of God. Yet this mystery, unknown to the intellect, is perceptible by love:

For of all other creatures and their works, yea, and of the works of God’s self, may a man through grace have fullhead of knowing . . . but of God Himself can no man think. And therefore I would leave all that thing that I can think, and choose to my love that thing that I cannot think. . . . He may well be loved, but not thought. By love may He be gotten and holden; but by thought never. . . . Although it be good sometime to think of the kindness and the worthiness of God . . . nevertheless yet in this work it shall be cast down and covered with a cloud of forgetting.

This dichotomy between head and heart is characteristic of the medieval Western movements that aimed at bringing laypeople into a more intense and vibrant relationship with God. Even though the Cloud is directed to contemplatives, its vernacular language made it available to laypeople. Later Pietist movements in Protestantism drew on writings like these (particularly Tauler and Eckhart) and transmitted them to modern evangelicalism.

Some have sneered at this understanding of God as overly simplified and “anti-intellectual.” But its roots grow from appreciating that human concepts can never truly capture the reality of God. Perhaps its flaw is the failure to recognize that human emotional experience is similarly inadequate—a premise that even the good Dionysian, Aquinas himself, accepted.

All creation shouts out God’s glory, cascading splendor from one level to another, and yet all of it is infinitely unlike God. That is the central paradox at the heart of medieval piety, placed there by an anonymous Syrian monk: all of our thoughts and feelings about God are “straw” compared to the infinite reality of God himself. CH

Margery Kempe’s story gives us a window into the daily lives of many devout medieval people.