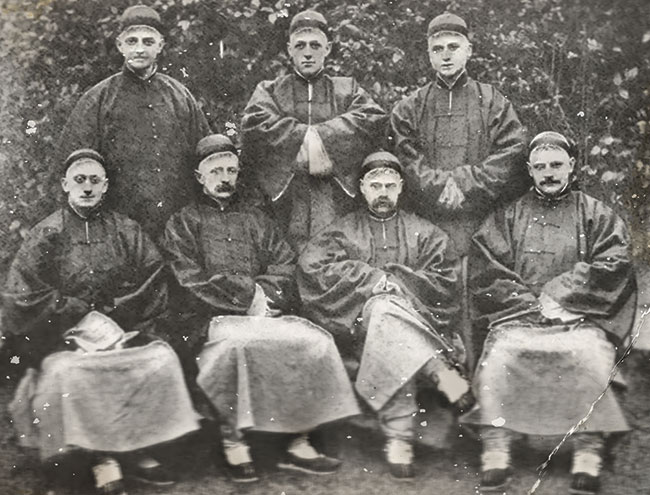 IN FEBRUARY 1885 seven young men associated with the University of Cambridge sensationally left fame and fortune as sports heroes to go to China as missionaries. Sixty years earlier, six of Thomas Chalmers’s students from the University of St. Andrews had made a commitment to become missionaries. Those at St. Andrews had modest social backgrounds and needed to prove themselves academically. Those at Cambridge were independently wealthy, aristocratic, and had either fame in sports or secure military or church careers. All were young people discovering, in company with others, that there was more to believing that “God was in Christ reconciling the world to himself” than they realized.

These famous “sevens” echo many people’s university experiences—excited by ideas, challenged by expanding horizons and passionate debates, exploring faith and doubt, and forming friendships. This enthusiasm often comes with intense self-reflection, an impatience to feel settled in relationship with God, and in some cases a struggle with depression. When Stuart Piggin and I wrote about the St. Andrews Seven some years ago, learning of their struggles helped affirm that we had not been alone in our own adventures of faith.

Going into all the world

The Great Commission (Mark 16:15) had been explicitly embodied in missionary societies since the founding of the Particular Baptist Society for the Propagation of the Gospel Amongst the Heathen in 1792. However it still faced indifference and even opposition in 1824 when six students formed the “St Andrews University Juvenile Mission­ary Society” to review and support missions and hear from famous missionaries like Joshua Marshman from India and Robert Morrison, pioneer translator of the Bible into Chinese.

Like the students, Marshman and Morrison were attracted to St. Andrews by professor Thomas Chalmers (1780–1847). As the group researched missions, questions arose about what God wanted them to do practically; as their friendships grew, so did their concern for China and India. Six eventually set their hearts on missionary service: John Adam, Alexander Duff, David Ewart, William Sinclair Mackay, Robert Nesbit, and John Urquhart.

Of these, the oldest was John Adam, just 20. He had been converted during a stay in Geneva and had been studying Latin, Hebrew, and Greek. Duff shared lodgings with his old school friend, Urquhart. Nesbit was studying theology. Less is known of Mackay and Ewart, but Chalmers inspired them all to connect faith to moral philosophy and political economy as well as to Christian mission.

When Adam met Urquhart, he immediately drew him into the group which began meeting for prayer and reading on Sunday mornings; Duff, Urquhart, and Adam frequently joined Chalmers’s family for evening meals. The founders of the Student Missionary Society were hard-working students, successful in winning prizes and scholarships, but had already turned their minds and efforts to purposes beyond. Even the attractions of golf at St. Andrews, where the sport originated, held little appeal.

At St. Andrews the student society grew rapidly, though most professors regarded mission societies as “puritanical and unacademic,” making it difficult to find somewhere to meet. Study routines were important, including Bible study. As opinion became polarized, the group published a magazine to support their cause; others published in opposition, and for a year rival student magazines went head to head. After two years membership reached 70. But studying missions only went so far. It was time to act.

Urquhart became the first to declare his decision to become a missionary. When he died unexpectedly in 1827, his devastated friends wondered if they were meant to take up the challenge. Duff (1806–1878) resolved to go to Calcutta as the pioneer missionary of the Church of Scotland. Over the next few years, Nesbit, Adam, Mackay, and Ewart also served in India. Another 10 society members became ministers; one member was chair, another secretary, of the foreign missions committees of their denominations.

Duff’s decision that his school would use English, not a vernacular Indian language, ran counter to missionary wisdom then and since; but in the 1830s, it met a felt need and laid foundations for higher education in India. His philosophy of mission allowed factions in the Scottish church to cooperate through the shared belief that education lay at the heart of Christian mission. Those who went to India were gifted teachers, remarkable for their engagement with the intellectual life of India and their sense of the importance of science, philosophy, ethics, and economics.

Significantly the St. Andrews society was among the pioneers of student-led Christian witness in British universities—indeed, the intellectual world of the university was itself a mission field.

Sixty years later in 1880s Britain, pressing Christian issues included not only the call to conversion but also the much-talked-about possibility of a “higher life” of Christian commitment. Mission meetings led by American evangelist D. L. Moody (1837–1899) encouraged conversion and further consecration, as did Hudson Taylor (1832–1905) of the China Inland Mission (CIM) in his call for missionaries to China’s nine inland provinces.

Taylor had simply been praying for 70 missionaries, but as one by one students with university or military connections applied, he realized that a prayer for “university men” to go to China was also being answered. Out of this came the “Cambridge Seven”—a group of students whose stories of interwoven lives, friendships, and deep experiences of Christian commitment and soul-searching would inspire missionaries for years to come. They toured Britain in a wave of publicity and excitement, leading to a climactic farewell from Exeter Hall in London on

Only six were actually from Cambridge: Stanley P. Smith, captain of the rowing team; C. T. Studd, captain of the cricket squad; William Cassels, a Church of England curate; Cecil Polhill-Turner, a lieutenant in the Royal Dragoons; his brother Arthur, in training for the priesthood; and Montague Beauchamp, also in training for ministry. The non-Cambridge member was Dixon Hoste, a lieutenant in the Royal Artillery.

Studd was one of England’s most famous cricket players; he had helped beat Australia only for the Australians to then defeat England and have the event labeled as the death of English cricket: “The body will be cremated and the ashes taken to Australia.” Studd and the English team then went to Australia and won back the trophy, now named the “Ashes.” With the potential of a brilliant sports career, he headed for the mission field instead.

They arrived in Shanghai on March 18, 1886. At first some tried to bypass the challenge of learning Chinese by praying for the gift of tongues. But once in Shanxi province, they proved willing to place themselves under the leadership of Chinese pastor Hsi whose ministry of prayer, exorcism, and use of morphine to cure opium addicts went beyond anything they’d experienced in England.

Later Cassels, Arthur Polhill, and Beauchamp relocated to Szechwan, where a Church of England diocese was established as part of the CIM with Cassels consecrated bishop. In 1903 Hoste succeeded Taylor as general director of the CIM. Beauchamp functioned as an independent missionary, using family wealth to support the CIM and build its headquarters in Shanghai.

None of the men lost their sense of God’s call on their lives, but not all stayed with the CIM. Studd (1860–1931) resigned in 1890, ministering in India and then the Congo and forming the Heart of Africa Mission—now the Worldwide Evangelization Crusade. In 1904 Smith resigned after adopting a “wider hope” theology, which held that salvation in Christ was possible for those who had never been evangelized. He remained in China and in good relationship with the CIM. Cecil Polhill left in 1900 after the Boxer uprising; he and Studd were early visitors to Azusa Street in February 1908 as the Pentecostal movement began to blossom in the United States. Polhill later became the first president of the Pentecostal Missionary Union in Britain.

At St. Andrews the students had gained as good an understanding of overseas mission as it was possible to get at that time without leaving England. At Cambridge the popular adulation of sporting heroes was pressed into the service of the gospel—but as they responded to the immediacy of the need, the fervor of revival, and holiness piety, they found a channel in the CIM. The two groups represented different eras but were similarly young, intense, capable, and earnest—sometimes embarrassingly so. Friendships during their spiritual, social, and academic formation gave them strength and wisdom they carried into their years of service and sacrifice ahead, united in ongoing growth in Christ even as their paths diverged. CH

John Roxborogh is honorary fellow in the department of theology and religion at the University of Otago, Dunedin, New Zealand, and coauthor of The St. Andrews Seven: The Finest Flowering of Missionary Zeal in Scottish History. He has taught church history and mission studies in Malaysia and New Zealand.