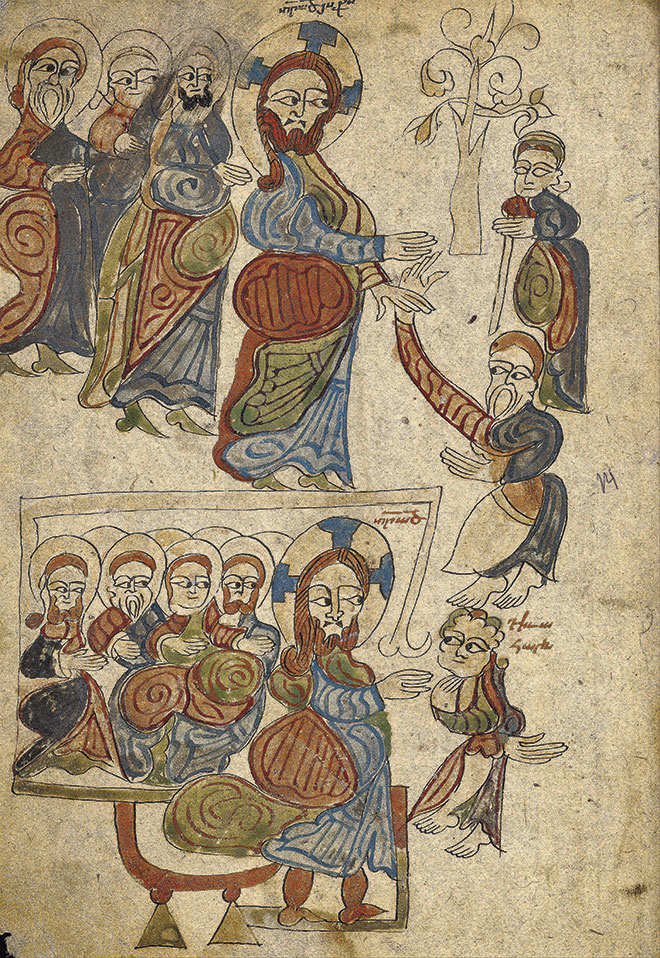 Jesus was on his way to the home of Jairus, one of the prominent leaders of the local synagogue (see Mark 5:21–43). The home was likely not far from the lakeshore where he was teaching, but many people crowding around Jesus may have impeded his progress. Despite his local position of authority, Jairus had bowed down before the traveling preacher because he was desperate: his daughter was near death and professional mourners were already standing by. Unfortunately for Jairus their slow progress was further interrupted.

A local woman had suffered vaginal bleeding for 12 years. In contrast to prominent community leader Jairus, she could not approach Jesus openly or ask him to lay a hand on her. The bleeding made her ritually impure by the standards of Scripture itself; she dared not presume that Jesus would be willing to touch her. Synagogue rulers like Jairus often acquired that title as wealthy donors, but this woman was destitute, having spent all her means on physicians, with nothing to show for it. In contrast to Jairus, who was married and pleaded for his beloved daughter, this woman was unable to marry or have children.

Yet for her, as for Jairus, Jesus was the last and only hope. Afraid to approach him openly, yet confident in his power, she worked her way through the crowd. Her faith was desperate, even scandalous; she disregarded the law that would render all whom she touched as impure for the day. Like friends of the paralytic who would not let a neighbor’s roof stand between their friend and Jesus’s healing power (Mark 2:1–12, Luke 5:17–39), or the insistent leper who defied purity protocols by closely approaching Jesus (Matthew 8:1–4), or a Gentile woman who refused to be deterred even by an unflattering canine analogy (Matt 15:21–28, Mark 7:24–30), this woman staked everything on Jesus’s ability to heal her.

As she touched the edge of his garment, she felt his healing power course through her. And then she got something she did not expect. Jesus turned, noting that power had gone out of him. Now both her shame and her act were publicly exposed! Rather than condemning her, however, he commended her faith. Yet this short interruption proved costly for the higher-status family of Jairus. Messengers brought him the news: your daughter has died. Now it was too late—or was it?

God had worked other healings in ancient Israel. After King Hezekiah prayed for God to heal him, the prophet Isaiah brought the Lord’s promise of healing and a prescription of a fig poultice for his boil (2 Kings 20:7; Isa. 38:21). David’s Spirit-inspired singing brought relief from Saul’s demon-driven manic experiences. Elijah and Elisha, though, remain prominent models for Jesus’s ministry of healing and food multiplication (1 Kings 17:14–16; 2 Kings 4:1–7, 42–44). Like Elisha, Jesus cured leprosy, sometimes specifically a foreigner’s (Luke 4:27; 17:11–19). But again, Jesus went beyond his predecessors: whereas Elisha prescribed bathing in the Jordan (2 Kings 5:14), Jesus cured by mere touch and command (Mark 1:41–42). Whereas David calmed a spirit-tormented heart, Jesus expelled demons right and left with his commands.

The reason scholars are hard-pressed to deny Jesus as a healer is that the evidence is so widespread in our earliest sources. Stories survive of ancient non-Christian healers, but most of these originated centuries after the reputed healings. The Gospels, by contrast, stem from within living memory of Jesus’s life. Not only do multiple sources recount that Jesus raised the dead, including Jairus’s daughter (Mark 5:41), but early second-century bishop Quadratus (d. 129) noted that some of those whom Jesus raised lived into his own time.

Nearly all historical Jesus scholars acknowledge that Jesus’s contemporaries experienced him as a healer and an exorcist. Those who rule out the possibility of divine activity prefer psychosomatic (i.e., mental) explanations for the conditions healed, although it is difficult to explain some of the conditions—particularly death—in such terms. Gospel scholars identify different layers of independent or semi-independent tradition in the Gospels, and all of these traditions depict Jesus as a healer. Indeed, nearly one-third of Mark’s Gospel recounts healings and exorcisms.

First-century Jewish historian Josephus (37–c. 100) spoke of Jesus as a wonder worker in his Antiquities (c. 93–94): “And about this time a wise man named Jesus arose, an author of astonishing deeds.” Josephus employed this term elsewhere for miracles performed by the prophet Elisha. Even Jesus’s detractors acknowledged his wonders, though they attributed them to sorcery. This was true of later rabbis as well as the pagan critic Celsus, who wrote around 175 to 177.

Jesus’s healing acts reveal divine compassion (Matt 20:34; Mark 8:2; Luke 7:13). He did curse a fig tree (as an object lesson) and allowed pigs to drown (to rescue a spiritually captive man). But most of his acts of power involve healing, deliverance, provision, or protection.

Jesus’s acts are also signs of God’s kingdom; he explained that setting people free from demons reveals that God’s promised reign is already breaking into this world (Matt 12:28 and Luke 11:20). When John asked whether Jesus is really the promised kingdom-bringer, Jesus pointed to Isaiah’s vision: blind eyes and deaf ears will open, the paralyzed will leap, good news will be preached to the poor, and God will birth a new creation (Matt 11:5 and Luke 7:22).

By themselves healings do not confer immortality or consummate kingdom promises. They are, however, a foretaste of the coming day when sickness and death will be no more. When Jesus’s disciples expected him to focus on setting up a new political dynasty in the capital, Jesus instead stopped to bless children (in a world with more than 30 percent child mortality) and to heal a blind beggar (Mark 10:13–16, 46–52).

Such signs in the Gospels and Acts tended to be dramatic and draw attention as they broke ground for the kingdom. Today we see similar signs, often in settings where new ground is being broken for God’s kingdom. Though these dramatic signs tend to be the ones that are recorded and visibly draw new converts, the Spirit can also stir gifts for healing in more ordinary ways. The gifts of 1 Corinthians 12:9 and Galatians 3:5 and the elders’ prayer for the sick (James 5:14–15) need not be dramatic to be effective.

The record of divine healings continued to grow as Christianity spread; nearly a fifth of Acts involves healings and other acts of divine power. In his Gospel and in Acts, Luke presented the mission of the Jerusalem church and the mission to the Gentiles as parallels with the ministry of Jesus. Paul reported dramatic signs in his ground-breaking ministry of church-planting in unevangelized regions

(Rom 15:19; 2 Cor 12:12; cf. also 1 Cor 2:4; 1 Thess 1:5). Second- and third-century sources, both from Christians and from their critics, reveal that such signs continued to flourish among them. Historian Ramsay MacMullen (see our Recommended Resources, pp. 62–63) has demonstrated that the leading cause of conversion to Christianity in the 300s was healing and deliverance from demons.

Westerners who read biblical healing narratives through the lens of the Enlightenment legacy—when famous philosophers like David Hume (1711–1776) dismissed the miraculous—sometimes find the Gospels’ miracle accounts unbelievable and exaggerated. This is not, however, the case for readers in many parts of the world. Indeed many non-western readers take these accounts as models (see testimony, below, as well as other stories throughout this issue). This may be closer to how they functioned in their original context.

When ancient seekers entered shrines of the Greek healing divinity Asclepius, they often encountered testimonies or models of body parts. Asclepius’s priests posted these testaments to their god’s power to encourage petitioners to trust their god. The Gospels may be presenting similar invitations to depend on Jesus’s power when they recount his miracles. The continuance of such healing confirms what the author of Hebrews proclaimed: “Jesus Christ: the same yesterday and today and forever!” (Heb 13:8). CH

Foretaste of the kingdom

When in prison John heard about Christ’s works, he sent word to him through his disciples: “Are you the Coming One? Or should we be waiting for somebody else?”

By way of reply, Jesus told John’s disciples, “Go tell John the things you’re hearing and seeing: Blind people are receiving sight, disabled people are walking, those with skin diseases are being healed and deaf people are hearing. Also, the dead are being raised and good news is being preached to people who are in need. It will go well with whoever does not get tripped up over me.” (Matt 11:2–6; cf. Luke 7:18–23).

My mother raised my sister in more ways than one. When Thérèse was two years old, she cried out that she was bitten by a snake. My mother found her not breathing. No medical help was available in the village, and my father was working out of town on the railroad. So my mother strapped Thérèse to her back and ran for about three hours to a nearby village, where a family friend, Coco Ngoma Moïse, was doing evangelism.

Coco Moïse prayed for Thérèse, she began breathing again, and the next day she was fine. Although the medical expectation is that irreparable brain damage begins after six minutes with no oxygen, Thérèse experienced no brain damage. She later finished a master’s degree at a seminary in Cameroon, returned to Congo for ministry, and recently retired.

Thérèse’s case is not the only one. Craig and I interviewed other friends in Congo (including Canadian nurse Sarah Speer who was serving there) who have witnessed similar events. Another friend, Jeanne Mabiala, worked as a WHO-trained midwife during the war. When a baby was born gray, with the umbilical cord wrapped around her neck, she concluded that the child had died in the womb hours before. As the father went out to make a coffin, Jeanne Mabiala and the other two women there, one Catholic and one Protestant, prayed. When the father returned, he found the child alive and well, and named her Mille Grace: “Thousandfold Grace.”

Healing and miracles in the Middle Ages