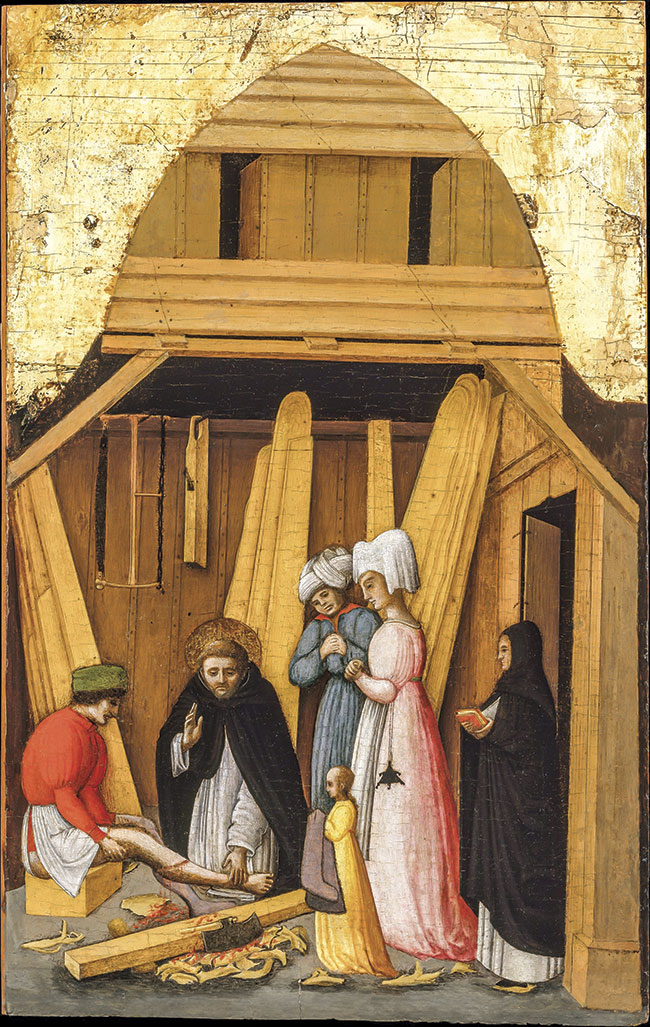 Have you ever tried to get help from someone high up in authority by appealing to one of their close friends? Maybe if your big ask came from the right person, it would be granted. Such was the role of the saints and martyrs in medieval Christians’ prayers for healing. Christians in the Middle Ages earnestly believed that the God who had created heaven and earth and redeemed humanity with his own incarnational presence would come to their aid. They trusted that God continued to intervene in the life of the church to confirm the testimony of truth, to point to the path to holiness, and to heal broken bodies and souls. They knew it was God’s power, but on a practical level, they wanted to appeal to one of God’s friends to intercede for them.

Patron-client relationships dominated the medieval period. Powerful patrons provided protection from an unfriendly society. These relationships were symbiotic—clients received gifts and security from the hands of the mighty, who in turn won recognition for their magnanimity and influence.

Medieval Christians understood the saints through these patron-client relationships. God the Father was often seen as terrifying and unapproachable. Christ had redeemed the people out of love but was also the one who would—in the repeated prayers of the church—“come to judge heaven and earth, and the world by fire.” To defend themselves from this sentence of judgment passed upon their sins, Christians needed advocates, or patrons, before the heavenly bar. These patrons were the special friends of God, apostles and martyrs, who had “fought the good fight” and would argue on an ordinary Christian’s behalf.

These men and women had also been neighbors who’d passed on; they were seen as continuing to care about their fellow Christians even from heaven, beseeching God for miracles of healing—a continuation of the practice of Christians on earth interceding for one another through prayer.

Some converts who had made their way to Christianity from Platonic philosophy and antimaterial heresies tended to downplay the saints. One such, at first, was Augustine (354–430). Disdaining the simple Christian faith of his mother, Monnica, he entered a life of sinfulness and searching. In particular he deplored his mother’s devotion to pilgrimage and the veneration of martyrs. An intellectual, he elevated the spiritual and marginalized the physical body.

After his conversion back to Christianity, Augustine was forced to come down from this lofty philosophical perch to deal with the needs of everyday Christians as bishop of Hippo. He grew to appreciate the profound incarnationality of the lived religion of his flock. They were fed on material sacraments, piously donated to build material churches, and humbly made physical pilgrimage to the tombs of honored saints, considering them special friends of Christ.

In 415 seekers claimed to have discovered the tomb of Stephen the Deacon (Acts 6–7) in the Holy Land. Portions of his relics were sent all over the Christian world; some found a home in the town of Uzalis, near Hippo. Pilgrims streamed to the tomb to ask the saint to beseech God for healing. Augustine was astonished and convinced by these healings—so impressed, he essentially added a sidebar to record them in the midst of City of God (426):

Likewise Eleusinus, a man of tribunitian rank among us, laid his infant son, who had died, on the shrine of the martyr . . . and, after prayer, which he poured forth there with many tears, he took up his child alive. . . . I am so pressed by the promise of finishing this work, that I cannot record all the miracles I know. . . .

For when I saw, in our own times, frequent signs of the presence of divine powers similar to those which had been given of old, I desired that narratives might be written, judging that the multitude should not remain ignorant of these things. It is not yet two years since these relics were first brought to Hippo and the miracles that have been published amount to almost 70. . . .

To what do these miracles witness, but to this faith which preaches Christ risen in the flesh, and ascended with the same into heaven? For this faith the martyrs died, and can now ask these benefits from the Lord in whose name they were slain. . . . What is said to be done by the martyrs is done not by their operation, but only by their prayer and request… .

At the end of his life, Augustine had come full circle. While still one of the church’s great thinkers, he had also returned to the simple faith of his long-suffering mother.

Such practices and beliefs surrounding healing miracles endured throughout the Middle Ages and are still lived out in Catholic and Orthodox traditions today. Thousands of miracle stories from every century of the Middle Ages echo the healings at St. Stephen’s shrine, many of which Catholic authorities diligently investigated beginning in the thirteenth century. Miracle stories were one of the most popular literary genres before the Reformation. Priests repeated them in sermons, pilgrims sought them, and—with a sense of vital living faith—ordinary Christians expected healing from a kind and loving God who listened to his friends (most especially his own mother).

Thomas Aquinas (1225–1274)—another of Christian history’s great minds—crystallized the Catholic doctrine of healing miracles. He admitted that miracles could be wrought through the intercession of saints and living holy men and women; yet, because such things are absolutely beyond the order of nature, they are produced only by God’s power. He believed that this doctrine safeguarded the worship due to God alone from the honor granted to people based on their relationship to God.

Further, he thought that miracles should have a religious end or purpose—awakening the soul to the invisible things of God through marvelous healing of bodies or minds. A healing is not an end in itself, which is why nearly all miracle stories include the performance of some vow or the pledge to do some good or holy work. In that sense the miracle performed is for building up the church and for the salvation of souls on earth. The healing of bodies points to their glorification at the resurrection of the dead.

One of Thomas Aquinas’s contemporary Dominican confreres was Peter of Verona (1205–1252), who died a martyr at the hands of dualist heretics (who denied the goodness of the body and the creation of the material world by God, and so rejected bodily healing miracles out of hand). Many stories tell that Peter performed wonders during his life:

One day when [Peter] was preaching in Milan . . . a mute youth was led to him by the piety of the crowd. He placed his finger—which had been consecrated to confect the Body of Christ—in the boy’s mouth. Upon doing this, his tongue was restored to health and the chains of speech were released. He asked the boy—who had been mute for nearly 10 years—what he had in his mouth. “Your finger,” he said, and at once he broke out in abundant thanksgiving in the presence of all, and returned an offering to Christ from his lips so newly opened. . . . The Lord reveals many signs and wonders for His glory through the saints.

Another story from after Peter’s death reads:

In the year 1314, the infant son of the merchant Peter de Galbato [died]. . . . His father and mother had seen many mighty miracles done for the brothers and sisters of their confraternity on account of the feast of Blessed Peter Martyr, so they began to call upon his great suffrages with tears, vowing an altar cloth, an image, and a candle to him. And when their son was not immediately raised the parents . . . were exceedingly saddened, and others began to say to them, “Why did we not succeed?” “Why did we not bear him hence for burial?” “What do you wish us to do?”

. . .Wailing for the resuscitation of their son, praying to Blessed Peter Martyr, [they] said, “Truly we believe and confess that God will restore him to us by the merits of Blessed Peter Martyr,” and when they had uttered these words, not ceasing to cry and to pray to the saint, suddenly the infant revived. And the father and mother carried the boy to visit the relics of the martyr on the vigil of the Holy Cross, as they had vowed, and promised to make more offerings at his tomb, giving thanks to God and the Blessed Martyr.

From the earliest days of Christianity, faithful Christians such as these had sought healing at the shrines and tombs of their beloved saints, who they knew were the special friends of God himself. They fervently believed that the God whose body was broken on the cross, and the martyrs who united their sufferings to his, knew well how to sympathize and aid their devotees in this “vale of tears.” CH

Donald S. Prudlo is Warren Professor of Catholic Studies at the University of Tulsa and the author of a number of books including Thomas Aquinas, Certain Sainthood, and The Martyred Inquisitor.