It Happened on SEPTEMBER 1 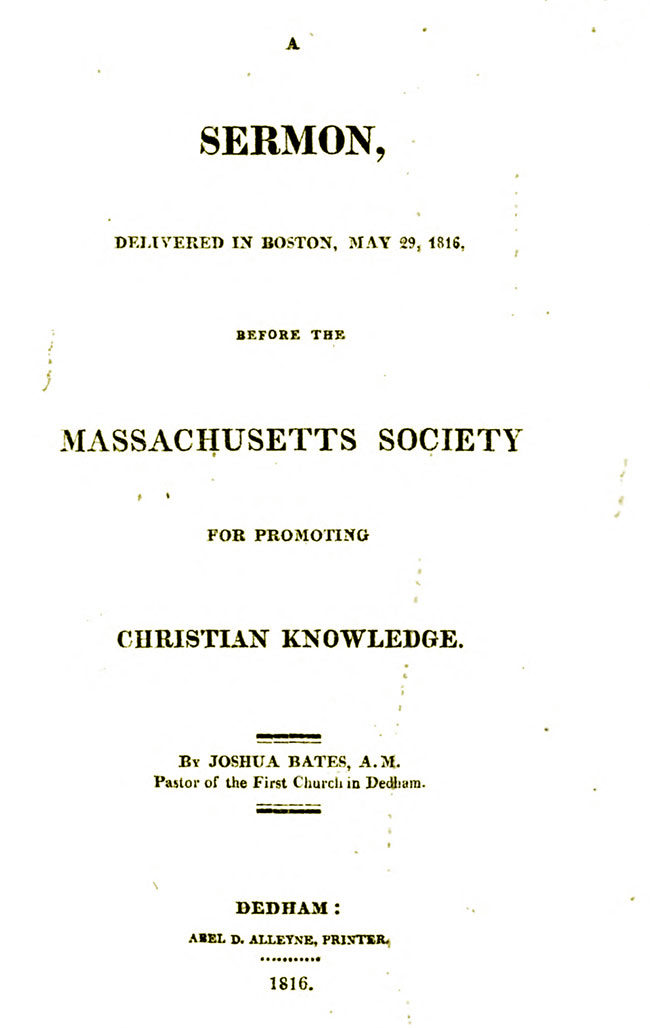 [Above: Title page of a sermon preached before the Massachusetts Society for Promoting Christian Knowledge. Google Books]

What do you do when the majority of your fellow citizens are ignorant of spiritual truths yet too poor to buy Christian literature? You form a society to get religious material into their hands. This was a popular remedy in Britain and the United States at the start of the nineteenth century. One of the societies formed to do this was the Massachusetts Society for Promoting Christian Knowledge.

Discussions for forming a society began in April 1803. Over the next four months, concerned men met in Boston several times for prayer and to hammer out a constitution. On this day, 1 September 1803, the society’s twelve founders adopted that constitution. The Massachusetts Society for Promoting Christian Knowledge became the first tract society established in North America. Many others would follow, including several Bible societies.

One of the Society’s key provisions read:

We, whose names are under written, do hereby, in the fear of God, and love of man, solemnly associate ourselves for the benevolent purpose of promoting evangelical truth and piety… by a charitable distribution of some of the best religious books and tracts among poor and pious Christians.

Prominent among the signatories were educators Jedidiah Morse and Eliphalet Pearson. (Among the eminent figures who later supported the society from a distance were Elias Boudinot, first president of the Continental Congress, and Archibald Alexander, famed author, theologian, and educator.) The twelve founders contributed $1,165 of their own money ($27,000 in 2020 dollars) for the first year’s expenses and chose Pearson as president, a position he held until 1821.

Pearson was devout, orthodox, and humorless. John Quincy Adams and John Murray Forbes caricatured him in a lampoon of Harvard faculty:

But Pearson with his awful frown

Full of his article and noun,

Spoke thus: “By all the parts of speech,

Which with such elegance I teach,

By mercy I will never stain

The character I now maintain

And whether I am right or not

I’ll not recede a single jot.”

Whatever his perceived shortcomings, under Pearson the society distributed 6,253 tracts in its first year and increasing amounts of literature as the years passed. Among the titles it promoted were George Burder’s “The Value of the Soul” and Lathrop’s “Challenge to Infidels.” Burder had founded the Religious Tract Society in 1799 in England, which is why his sermons were available as tracts. By 1805 the Massachusetts society was distributing popular evangelical books as well as tracts. Although it subsidized the tracts it provided, recipients were still required to pay something.

In 1807 the Massachusetts legislature incorporated the society. But in 1870 it passed a bill allowing the society to shift its assets to other organizations. During the sixty-three years of its existence, ministers (some from among its own members) exhorted members at meetings, reminding them of their biblical purpose. Many of these sermons were printed.