It Happened on AUGUST 5 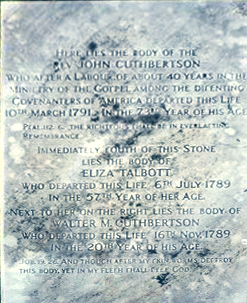 [Above: Gravestone of John Cuthbertson and his wife]

After being forty-six days, twenty and six-tenth hours at sea, from London Derry Loch, landed safely at Newcastle August 5th, 1751, about eight in the forenoon...

So begins one of the most famous diaries in American history. When Rev. John Cuthbertson arrived in America on this day, 5 August 1751, the thirty-three-year-old minister was the first to migrate from Europe for the explicit purpose of meeting the needs of the colonies’ Presbyterian Covenanters. At the time, the widely scattered Covenanters had only one minister (Alexander Craighead) in the region of Lancaster, Pennsylvania.

For forty years, Cuthbertson labored in the wilderness regions of western Pennsylvania, as well as in Connecticut, Maryland, New Hampshire, New Jersey, New York, Vermont, and Virginia. He rode about seventy thousand miles to share the gospel and officiate baptisms and marriages. Often his passage was through untamed forests or lands where roads and bridges were scarce. He fought a bear once, but we have no details of this occurrence. S. Helen Field summarizes his self-imposed hardships, writing:

He encountered deeps snows and raging blizzards; scorching sun and heavy rains; he was often cold, sick, and hungry, as shown by his frequent entries; he braved wild beasts, venomous serpents, cruel Indians; the waters were often dangerously high. Most of his studying was done on these long rides.

The details that Cuthbertson reported in his diary are a treasure trove for genealogists. He recorded over five thousand family names and noted hundreds of marriages. He also logged eighteen hundred baptisms which he performed during his ministry.

Although Cuthbertson preached powerful sermons that won souls and elevated the behavior of his listeners, he was no plaster saint. The Covenanters once found it necessary to suspend him for getting drunk. Harassed by British authorities and the Church of England, he called for an independent United States. He loved tea and carried his own supply, at one stop presenting his hostess with a packet and asking her to make some. Unfamiliar with the rare treat, she boiled the leaves, poured out the water, and presented him with the greens. He exclaimed, “Dear woman, if ye ha’ gi’en me the broth, ye might have kept the kale!”

Cuthbertson helped found the first Reformed Presbytery in America. Near the end of his fruitful life, he settled in eastern Pennsylvania. His tombstone in Middle Octorara Cemetery, Quarryville, Lancaster County, reads:

Here lies the body of the Rev. John Cuthbertson, who after a labour of about 40 years in the ministry of the Gospel among the disenting Covenanters of America, departed this life 10th March, 1791 in the 73 year of his age.