It Happened on AUGUST 6 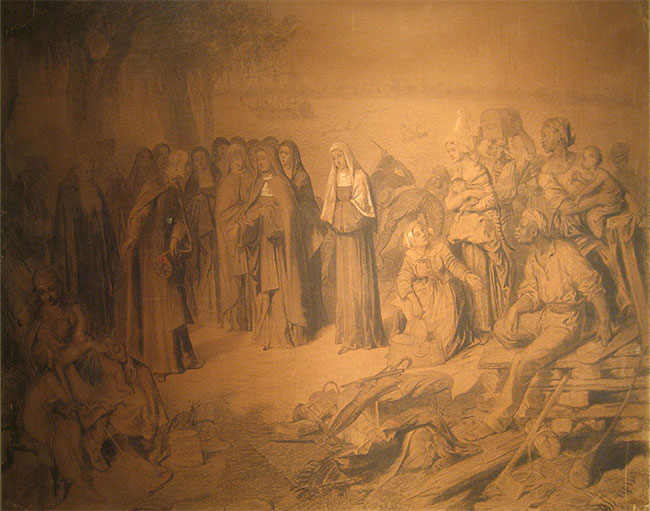 [Above: "The Arrival of the Ursulines in America on August 7, 1727". Unknown 19th century artist.—[public domain] Wikipedia]

Fourteen French women who boarded La Girondein February 1727 sailed with lofty aims. Associates of the Ursuline Order (nuns, postulants, and seculars), they were bound for Louisiana where they intended to found a mission. Prior to sailing they had already endured rough roads on which their coach got bogged down, and had been endangered by robbers, hunger, and cold. More challenges and adventures awaited them.

Following the Reformation, the Ursuline order of the Roman Catholic Church had emerged to do practical work such as tending the sick and educating women. They worked closely with the Jesuits, whose methods and organization they imitated. Father de Beaubois, who arranged for the Ursulines to come to the New World, was himself a Jesuit.

Boarding La Girondewas not as simple as climbing a retractable gang plank; instead the women were hauled onto deck with a rope. Because of storms and headwinds, a voyage originally expected to take three months took five. (The voyage was so overdue that Father Ignace-Nicholas de Beaubois, their sponsor, gave them up as lost at sea.) Five times they encountered pirates, but in each case the nuns prayed and the other passengers and crew arrayed themselves for battle, and the corsairs withdrew.

In the Gulf of Mexico, the ship went aground. Battering waves threatened to destroy it. The crew had to throw cannons and a good deal of cargo overboard, including sixty-one barrels of brandy. Finally they reached the mouth of the Mississippi River. After a few days’ rest, they transferred to river boats for the final leg of their journey to New Orleans. Heat, mosquitoes, and heavy rains made these last three days of travel hellish.

But finally, on this day, 6 August 1727, New Orleans’ first Ursulines arrived to a hearty welcome. Governor, city council, clergy, and military turned out to greet them. Because their quarters were incomplete, Governor Bienville loaned them his personal home. The next day, they got to work.

Led by Mother Mary Trancepain, the New Orleans Ursulines immediately began tending the sick, which was the greatest need of the troubled Louisiana colony. Soon the sisters opened a hospital; epidemics of malaria and yellow fever would engage much of their energy. Another undertaking was a school for poor children, and their work with orphans and slaves would win admiration. They opened an academy for women, to which elite families in South America also sent their daughters.

In 1732 the growing order of Ursulines took possession of their completed convent. When they outgrew that in 1823, they relinquished it to the city’s bishop and moved to a beautiful new building. The health care and educational efforts of the Ursulines would greatly impact the young United States.