It Happened on AUGUST 4 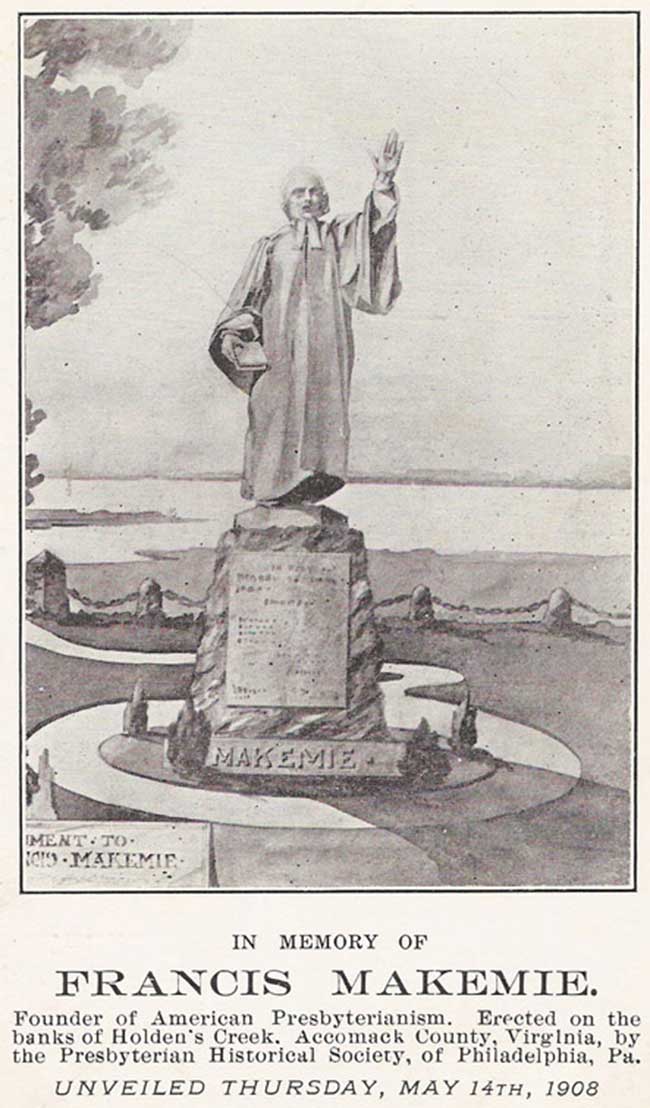 We know that Francis Makemie came to the American colonies in 1682 or after—the year Laggan Presbytery in Ireland ordained him to evangelize in America. Where or when he landed, we do not know. Yet he would become a notable Presbyterian founder, preaching in Barbadoes, Virginia, Maryland, Pennsylvania, and New York.

Makemie was not solely a minister. To make ends meet, he engaged in trade. Virginia Court records show that he sued debtors from time to time. He married the daughter of a wealthy merchant and acquired extensive lands and some slaves. Meanwhile, his congregations increased greatly because he was an impressive preacher and the only ordained minister in two Virginia counties.

Indeed his foremost aim seems always to have been the spread of the gospel. He prepared a catechism, disputed with Quakers, defended dissenter churches (independents who acted outside the Church of England), and preached wherever he traveled. He was licensed to do so in both Barbadoes and Virginia. He organized several churches in Maryland and was closely associated with a congregation at Snow Hill before his marriage.

In 1704, he went to England to seek relief for Virginia’s religious dissenters who were suffering under the heavy hand of the Church of England. He wrote a book urging toleration.

Back in America, he joined with other Presbyterian leaders in organizing the first American Presbytery. It united churches in several colonies. That alone would have ensured him a lasting name in the history of the United States.

However, he is most frequently remembered because of his significance for religious liberty. Visiting New York, he preached without a license in the home of a William Jackson. Lord Cornbury arrested him. Months later, he was brought to trial. Cornbury argued that Parliament’s Act of Toleration did not extend to the “plantations” (that is, the English colonies). Makemi argued it did: otherwise Barbadoes, Maryland, and Virginia could not have issued him licenses under it. The jury found him not guilty, an event that is regarded as a landmark of American religious freedom. Thereafter other dissenters also would appeal to the Act of Toleration as granting them the privilege of preaching.

Despite the jury verdict, Cornbury would not release Makemie until he paid heavy court costs. Upon his release, Makemie immediately preached again, this time at a Huguenot church in New York City, then fled the state, eluding a fresh attempt by Cornbury to arrest him. He traveled to New England, From there he wrote a letter of protest to Cornbury and published the records of his arrest, petitions, incarceration, and trial.

Francis Makemie died on this day, 4 August 1708, shortly after he returned to Virginia. He had been the first “regular” Presbyterian minister in the American colonies, that is the first to hold Scottish Calvinist tenets, unlike the Puritans who were English Congregationalists.