It Happened on AUGUST 29 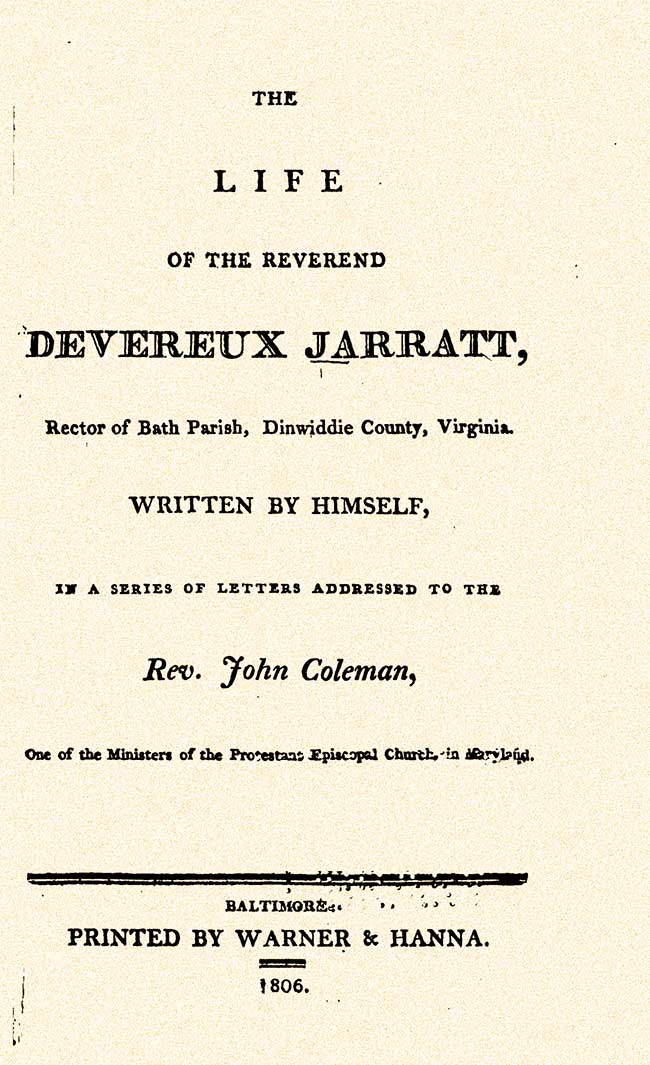 On this day, 29 August 1763, Rev. Devereux Jarratt, a thirty-year-old priest of the Church of England, became rector of Bath Parish in Virginia. Although several ministers had preceded him, when he arrived and met his congregation, he said, “I found the principles of the gospel—the nature and condition of man, the plan of salvation through Christ, and the nature and necessity of spiritual regeneration—as little known and thought of, as if the people had never a church or heard a sermon in their lives.” His years at Bath would change that.

Jarratt’s youth did not promise what his maturity produced. Although required to memorize the Church of England catechism, he seldom went to church and readily indulged sinful impulses. The local minister was no help. Uninspired and uninspiring, he held his sermons in front of his face as he read because of poor eyesight.

In 1753, twenty-year old Jarratt was teaching in Albermarle County. When he boarded with the Cannons, he found Mrs. Cannon was a deep Christian, affected by the New Light revival spreading among colonial Presbyterians. She required Jarratt to listen as she read one of John Flavel’s sermons each evening (see our story about Flavel 27 April). He began to grasp his need for salvation and was converted, but had no assurance he was saved. After studying Christian books, he was able to latch onto a Scripture that seemed written for him, believed God’s promises, and experienced joy. Immediately he began lay ministry and considered becoming a Presbyterian minister. On second thoughts, he felt he would be of more use in the Church of England—the established church of Virginia—which had a reputation of being lax and dead.

And so he sailed to England to be examined and ordained. He was assigned to Bath. In his autobiography he mentioned that most of his auditors thought they would be saved by good works. When he preached salvation by faith, he stood alone:

not knowing of one clergyman, in Virginia, like minded with myself; yea, I was opposed, and reproached, by the clergy—called an enthusiast, fanatic, visionary, dissenter, Presbyterian, madman, and what not;—yet was I so well convinced of the utility and importance of the truths I declared and the doctrines I preached, that no clamor, opposition, or reproach, could daunt my spirit, or move me from my purpose and manner of preaching....

His sound preaching affected his listeners so that some wept; but a year or more passed before anyone sought salvation. After that, not only did he preach diligently in his own parish, he itinerated at other churches in Virginia and North Carolina, cooperating with the Methodists who were spreading their life-changing teachings throughout the colonies. (The Methodists had not yet broken from the Church of England.) A modest revival began in 1770 and continued to swell until in 1776 and 1777 hundreds came to Christ in southern Virginia, often with emotional outbursts. Jarratt formed the converts into small groups.

Jarratt died of cancer in 1801. By then he was largely isolated. His declining health had limited his ability to leave home. Following the American Revolution, which he had endorsed, the Anglican Church became the Episcopal Church. Its clergy continued to distance themselves from him. And he no longer had easy relations with Methodists because they had formed their own denomination.

His autobiography, The Life of the Reverend Devereux Jarratt . . . Written by Himself, is considered one of the most readable to come out of eighteenth-century America.