It Happened on AUGUST 14 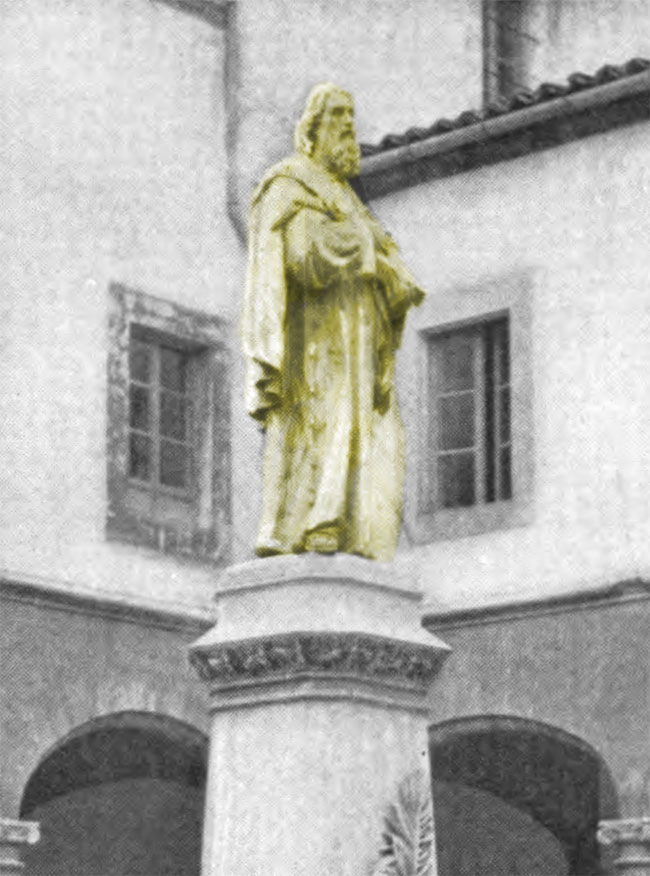 [Above: Statue of Raymond Lull at Palma, Majorca—from the frontpiece of Samuel M. Zwemer’s Raymond Lull, First Missionary to the Moslems, 1902.]

Raymund Lull burned with love for the things of Christ. His life showed it from the day of his conversion until his death as a martyr. When he was about seventy-five years old, he wrote:

I had a wife and children; I was tolerably rich; I led a secular life. All these things I cheerfully resigned for the sake of promoting the common good and diffusing abroad the holy faith. I learned Arabic. I have several times gone abroad to preach the Gospel to the Saracens. I have for the sake of the faith been cast into prison and scourged. I have labored forty-five years to gain over the shepherds of the church and the princes of Europe to the common good of Christendom. Now I am old and poor, but still I am intent on the same object. I will persevere in it till death, if the Lord permits it.

Born in 1232 in Palma, Majorca (a large island off the coast of Spain), he became a poet, courtier, and womanizer. He is considered the first great author in the Catalan dialect. After his conversion, he wrote Christian “romances” (fiction) including Blanquerna, which follows the career of a reform-minded Christian from hermit to monk to bishop to pope and finally, after resigning the papacy, to contemplative old man. Lull also gathered proverbs and wrote fables. Over a thousand “books” are attributed to him, about three hundred of which are certainly his. They fill a printed edition of twenty-one volumes.

Having composed some erotic verses when he had passed his thirtieth year, he was suddenly arrested by a vision of Christ on the cross suffering for him. Ashamed, he could write no more that day. When he returned to his writing later, the same thing happened. This time, he left his former self-indulgent way of life. A popular legend attributes his conversion to another cause. It says he pressed a married beauty to show him her bosom. She uncovered herself, revealing breasts ravaged with cancer, and the shock led him to repentance. His autobiography does not mention the event but does recount his visions.

The more Lull contemplated Christ, the more he saw the depth of his sin and the need of every person for a redeemer. In this he included Muslims, whom Christians everywhere detested. He determined to win them through love, but he realized he first needed to learn their language and culture and devise an apologetic that would convince them. He wept when he saw the enormity of the preliminary work he would have to do.

He spent seven years mastering Arabic, learning the Koran, and preparing a philosophical system to address Muslims in light of their own preconceptions. Along the way, he devised an innovative and complex system for relating categories of knowledge to one another. He persuaded kings and popes to open schools of oriental learning.

However, Lull had no success convincing church leaders to engage in loving missionary work to Muslims; if church leaders thought of missions at all, they preferred forced conversions and crusades. Only a few Franciscans found inspiration in Lull’s idea. Lull himself experienced a great failure during his time of preparation. He had purchased a Muslim slave to teach him Arabic. One day the man blasphemed Christ, and in response Lull struck him. The slave pulled a knife on him and was consequently cast into prison. There he committed suicide, leaving Lull broken for his own loveless attitude.

Learning, writing, and teaching did not satisfy Lull. In 1291 or 1292 he sailed to Tunis, where he challenged Islamic leaders (imams) to debate him, promising to become a Muslim if they prevailed in argument. Instead, he converted a few imams and was imprisoned and ejected from Tunis. Around 1300 he visited Syria and Armenia to convert Muslims. In 1307 he went to Africa again, this time to Bejaïa (Bugie), where he converted a few Muslims who began to worship Christ secretly.

On this day, 14 August 1314, the eighty-one-year-old Lull embarked for Africa a third time. He returned to Bugie (some scholars say Tunis), where for ten months he labored out of sight of authorities, strengthening his former converts. At last he could bear anonymity no more and openly preached the Trinity in a public place. A mob stoned him; his desire to persevere in mission work until death was granted. Whether he died in Africa or aboard a merchant ship in sight of Palma is debated (some scholars deny his martyrdom altogether), but either way his body was interred at his birthplace in an elaborate tomb.

Centuries later a pope declared some of Lull’s teachings heretical, charging that Lull erased the distinction between natural truth and supernatural revelation.