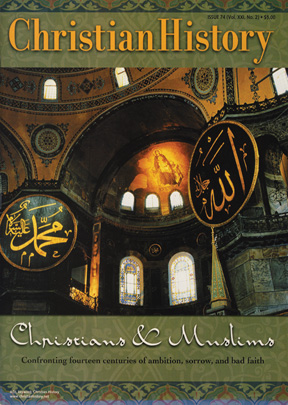 Christians & Muslims: Did You Know?

Christians & Muslims: From the Editor — The Cover’s Story

A picture of Hagia Sophia, heavy with Christian and Islamic symbolism, speaks of centuries of ambition, sorrow, and bad faith.

Muhammad Amid the Faiths

The prophet’s interactions with paganism, Judaism, and Christianity birthed puzzling prophecies and a legacy of strife.

Basics of a foreign faith.

It spread faster than any other religion in history. Here are some reasons why.

The Pact of Umar

Islamic protection came with a price.

A Deadly Give and Take

Crusaders fought many terrible battles in the Middle East, but Muslims started —and won—the war.

As their brethren attacked Muslim fortresses, these evangelistic crusaders fought for Muslim souls.

From Crusades to Homeland Defense

Martin Luther responded to Islam with a new military philosophy, fresh focus on the Qur'an, and provocative readings of biblical prophecy.

Jihad means more than warfare, but the sword is central to Islam’s texts, its history, and its founder.

Whether Christians under early Muslim rule used polemic or polite dialogue to defend their faith, they hit an impasse at the Incarnation.

When the West finally gained influence in the Islamic world, Christians lost their nerve.

Because broken promises fueled Islamic militancy, the road to stability must be paved with good faith.

More resources for further reading on Islam and Christianity.