It Happened on JULY 18

INFALLIBLE TRUTHS FROM THE POPES? 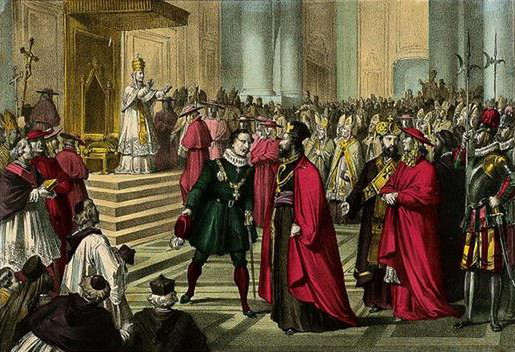 [Solemn opening to the ecumenical council—Wikimedia.]

When the First Vatican Council met in 1869–1870, the Catholic Church was under attack. Italy had confiscated lands long controlled by the popes. Pius IX was virtually a prisoner in Vatican City. Jesuits dominated the church at Rome and were determined to get a declaration of papal infallibility.

Discussions before the gathering of bishops were secret. A letter written by an opponent under the pseudonym Quirinus observed:

…[T]he preliminary labours, as is well known, had to be carried on under the seal of secrecy of the Holy Office (the Inquisition). Nothing was communicated to the Bishops themselves, who came to Rome in complete ignorance of what they were to vote about—a procedure without any precedent in Church history. It really seems sometimes as if the object was to turn the Church topsy turvy, and take pleasure in doing exactly the contrary to what the Church of earlier ages did when nearer her original foundation. Formerly the idea of a Council was associated with the notion of the fullest publicity, and the common participation of all the faithful; the deliberations were conducted with open doors, and all were admitted who wished to hear them….

Although bishops were unsure exactly what they would be voting on, most knew that infallibility would come up in some form. Writing under the name Janus, a Catholic historian compiled many instances that showed the fallible nature of papal pronouncements, including at least one instance in which an ecumenical church council declared a pope heretical and anathemized him, and several instances in which popes vilified their predecessors or overturned their decisions.

A few bishops refused to participate in the council because of their disagreement with the expected doctrine. Pressure was intense on the remainder to agree to a teaching that had little precedent in church history. Arguments for its acceptance were not so much about the doctrine’s truth as that it would increase the strength of the church in face of its common enemies.

On this day 18 July 1870, opposition proved feeble and the council overwhelmingly adopted the doctrine that,

the Roman Pontiff, when he speaks ex cathedra, that is, when in discharge of the office of pastor and teacher of all Christians, by virtue of his supreme apostolic authority he defines a doctrine regarding faith or morals to be held by the universal Church is possessed of that infallibility with which the divine Redeemer willed that his church should be endowed.

Thousands of Catholics remained opposed to the dogma of papal infallibility. They would be known as Old Catholics. Their intellectual leader was professor Johann Joseph Ignaz Von Döllinger of Munich, possibly the Janus who had written the book against infallibility. The Old Catholics made known their disagreement at once. The greatest dangers they anticipated were misuse of authority by a renegade pope to issue false teaching, the ability of Rome to quash necessary dissent, and an increase in the power of the Jesuits.

In September 1871 the Old Catholics met in Munich. Among their declarations was this, “We reject the doctrine embodied in the Vatican decrees, that the Pope is the sole divinely ordained depositary of all ecclesiastical authority and official power. . . .”

Eighteen years later, at Utrecht, the Old Catholics codified their positions. They agreed the pope was first among equals, but firmly rejected the decrees of the 1870 Vatican Council. As decades passed, other Catholic theologians, most notably Hans Küng, continued to question the dogma of papal infallibility.