First in a four-part series by Jim West that highlights the lofty view of the Bible taken by four Swiss reformers. 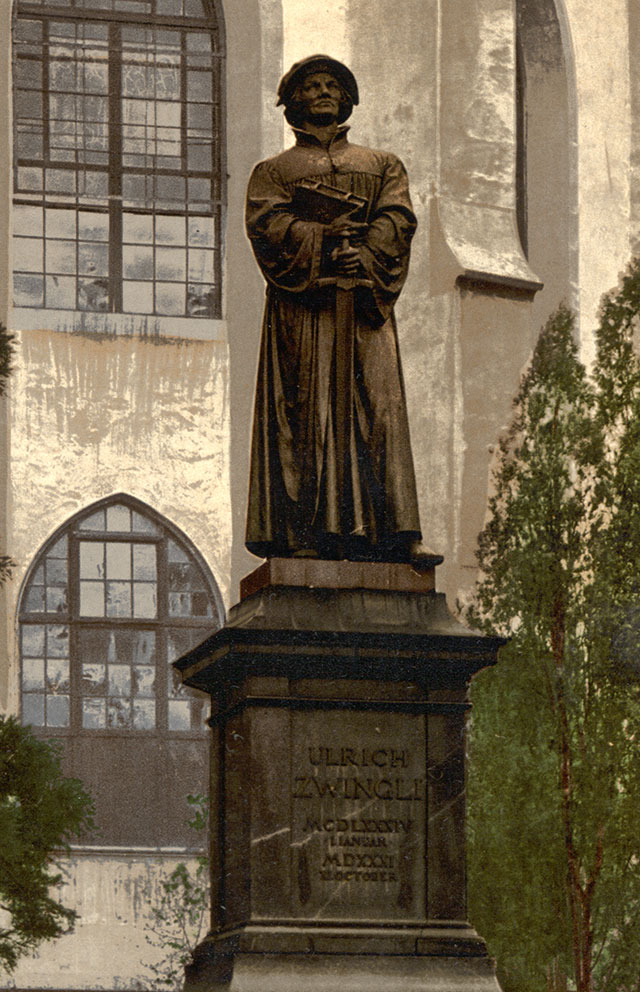 [Zwingli statue in Zurich, courtesy of Library of Congress]

We introduce today a four-part series by Jim West that highlights the lofty view of the Bible taken by four Swiss reformers.

Two strands of the Swiss Reformation are represented by the four figures. The first is the Zwinglian and includes Zwingli, Bullinger, and Oecolampadius. The second is the Calvinist, represented by Calvin himself. Bullinger and Calvin worked out differences between the two Helvetic tracks of the Reformation, bringing about a more unified Swiss front.

We begin today with the first of the Swiss reformers, Ulrich Zwingli, who brought about reformation in Zurich by concentrating on the text of Scripture.

If then H. Scripture is necessary for obtaining life eternal and for preserving the Church upon earth, its essential content must also be of such clarity, that it may be understood even of the unlearned, who reads H. Scripture with a believing heart or one desirous of salvation. Therefore H. Scripture has the attribute of perspicuity—[attributing to the book what is the gift of God?]—“by which the things necessary to be known for salvation are so plainly and clearly unfolded in Scripture, that they may be understood even by unlearned believers who read with devotion and attention” (Wendelin, Proleg., c. 3). This does not imply that every separate word and sentence should be unambiguously clear. Rather the perspicuity of Scripture is to be connected only with the basic doctrines of revelation, which condition blessedness.

Such a view of Scripture becomes important in the early Reformation because the authority of the Church of Rome and the Magisterium, as well as the traditions of the Roman Catholic Church are being replaced by the authority of Scripture.  Scripture must itself be clear enough and simple enough to interpret that average Christians are capable of doing it.  Put more plainly, the Roman Pope must be replaced by the Paper Pope, the Bible. Huldrych Zwingli was early on to realize this and in 1522 wrote his ‘On the Clarity and Certainty of the Word of God’.

Zwingli availed himself of the permission to preach in the nunneries, and afterwards issued two sermons thus originally delivered. The first, dated September 6, 1522, is upon the Bible, and has for its thesis that only the Holy Spirit is requisite to make the Word intelligible; no Church, no Council, much more no Pope is needed’.  To which the author adds that the sermon was titled ‘“On the Perspicuity and Certainty, or Infallibility, of the Word of God”. Stapfer praises it. The original hearers were Augustinian nuns of the Oetenbach convent in Zurich. A second edition of the sermon appeared in 1524, but judging from the preface to it Zwingli made small impression on the nuns.

Here the central themes are indicated: the Word of God is comprehensible in and of itself with the aid of the Holy Spirit.  The Scriptures and the Spirit thereby replacing the Pope and the Tradition of the Roman Church.  Further on

Turning to the tractate itself, it begins with a lengthy treatment of the human as creature created in the image of God, with the intellect necessary to understand the will of God.  Next Zwingli considers the power of the Word of God (both spoken and written) and its sufficiency for the impartation of divine knowledge, particularly regarding salvation.  He festoons his tractate with many Scriptural proofs from both the Old Testament and the new. Then he turns to a description of the clarity of Scripture.  It is here that he focuses the bulk of his attention.

Zwingli here observes "When the Word of God shines on the human understanding, it enlightens it in such a way that it understands and confesses the Word and knows the certainty of it."  Here Zwingli makes his central point: God’s self disclosure (verbally or in written form) is the source of a person’s ability to apprehend the truth of revelation. Zwingli follows this assertion with a plethora of Scriptural proofs.

To those who would oppose his approach, Zwingli remarks (at some length)

Oh you rascals—you are not instructed or versed in the Gospel, and you pick out verses from it without regard to their context, and wrest them according to your own desire. It is like breaking off a flower from its roots and trying to plant it in a garden. But that is not the way: you must plant it with the roots and the soil in which it is embedded. And similarly we must leave the Word of God its own proper nature if its sense is to be the same to all of us. And those who err in this way we can easily vanquish by leading them back to the source, though they never come willingly. But some of them are such confirmed dunces that even when the natural case is expounded in such a way that they cannot deny it, they still allege that they cannot presume to understand it thus unless the Fathers allow that it may so be understood: on the ground that many expositors will always have a better understanding than one or two.

Context, in other words, is key.  From this point forward Zwingli argues that those led by the Spirit, who opens the meaning of Scripture to them since they have the Spirit indwelling, are superior interpreters to those who rely on the Church’s traditions or the Pope’s interpretations.  Along these lines, he makes this autobiographical confession:

When I was younger, I gave myself overmuch to human teaching, like others of my day, and when about seven or eight years ago I undertook to devote myself entirely to the Scriptures I was always prevented by philosophy and theology. But eventually I came to the point where led by the Word and Spirit of God I saw the need to set aside all these things and to learn the doctrine of God direct from his own Word.

Zwingli finalizes his exposition of the self sufficiency and clarity of Scripture by offering a series of suggestions concerning interpretation of the sacred text which he prefaces by writing ‘For if we are not versed in Scripture, how are we to tell whether the priest who teaches us is expounding the pure truth unadulterated  by his own sinful desires?’

Zwingli’s understanding of Scripture as clear and comprehensible for those who are led by the Spirit in their reading of it would profoundly influence his co-Reformers in Basel and Zurich and Geneva.