It Happened on JUNE 26 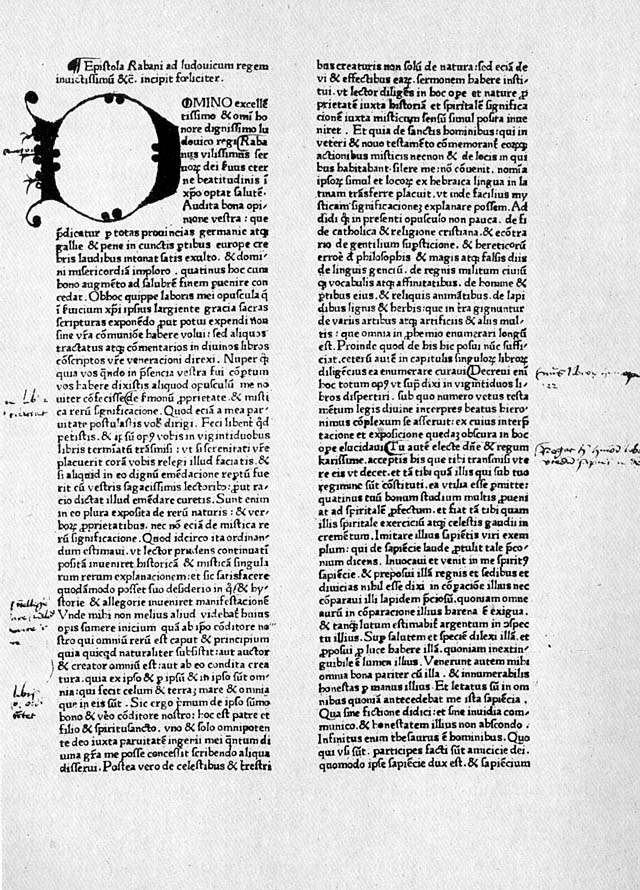 On this day, 26 June 847, Hrabanus Maurus was consecration archbishop of Mainz. Born to noble parents in Mainz around 776, he was sent to Fulda for his preliminary education and during 802 and 803 studied at Tours with Alcuin, who gave him the name Maurus for his diligence and purity. (The original Maurus had been a favorite disciple of St. Benedict, founder of the Benedictine Order.)

Upon his return from Tours, he became head of the school at Fulda, making it the most esteemed school in the Frankish Empire. He had trouble with Abbot Ratgar, however. Ratgar wanted the students to work on new monastery buildings during hours Hrabanus wanted them to study. Around 814 Hrabanus left the school and is thought to have visited the Holy Land during his absence. He returned to Fulda in 817 when Eigil replaced Ratgar.

In 822 Hrabanus became abbot himself, an office he held for twenty years. He took his educational and spiritual duties seriously. During those years he completed many building projects, increased the library, provided priests for neighboring towns, and built thirty churches around Fulda.

His days as abbot were shortened by politics. He had sided with Lothair against Louis the German. When Louis triumphed over Lothair, Hrabanus fled from home in 840. Although he returned to the abbey the following year, he resigned in 842, probably at the insistence of Louis. For several years Hrabanus studied and wrote. In 845, he reconciled with Louis, who tapped him to be archbishop when Otgar died.

As archbishop, Hrabanus fed the poor during famine and held three regional synods. Among the actions of the synods was a condemnation of Gottschalk of Orbais for his views on predestination.

Although he contributed to every literary genre of the day, Hrabanus is most famous for an encyclopedia, De Universo. He is also credited with several hymns (although scholars debate if he actually authored them). “Veni Creator Spiritus,” the most famed of the Latin hymns attributed to him, has been set to music by many famous composers, including Giovanni Pierluigi da Palestrina, Marc Antony Charpentier, Hector Berlioz, Camille Saint-Saëns, Gustav Mahler, Karol Szymanowski, and Arvo Pärt.

from thy bright heav’nly throne;

come, take possession of our souls,

and make them all thine own....

Thou who art sevenfold in thy grace,

his promise, teaching little ones

to speak and understand.

O guide our minds with thy blest light,

with love our hearts inflame;

and with thy strength, which ne’er decays,

Through thee may we the Father know,

and thee the Spirit of them both,

thrice-blessed three in One.

Hrabanus Maurus died in 856. He had been one of the greatest figures in the Carolignian Renaissance, a renewal of literary and educational work begun under Charlemagne.